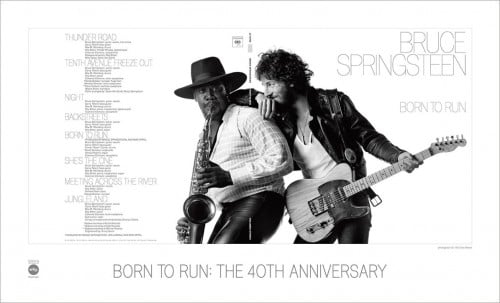 Bruce Springsteen is widely celebrated for his long list of musical accomplishments. As a 1999 Rock and Roll Hall of Fame inductee, he’s won 20 Grammys, an Academy Award and has sold over 185 million albums. As one of America’s most beloved artists, Springsteen’s Born to Run (1975) made an impact on the music community that has lasted decades. This record not only gave us hits like “Thunder Road” and “Jungleland,” but the classic album cover featuring a photo of Springsteen leaning on E Street Band saxophonist Clarence Clemons.

In honor of the 40th anniversary of the Born to Run album, Eric Meola, the photographer who captured the album’s iconic cover, has led an effort to publish a commemorative poster—with a limited edition printing of 1,975 to support WhyHunger . As 2015 marks the 40th anniversary of both the album and WhyHunger, an organization both Eric and Springsteen have long supported, the collaboration was natural.

“It was a little more than 40 years ago when I did my first interview with Bruce Springsteen on network radio.  He has been a major partner and supporter of our organization for almost 30 years,” said WhyHunger co-founder and ambassador Bill Ayres—“This is our 40th Anniversary and it coincides with the 40th Anniversary of Born to Run and this beautiful poster, it was meant to be!”

A small logo in the lower left-hand corner of the poster reads, “Celebrating 40 years of WhyHunger.” This 40th anniversary poster gives fans the chance to own an affordable copy of this quintessential image, while also raising funds for WhyHunger.

In this article from the East Hampton Star, Mr. Meola recalls that given how many people needed to sign off on the use of the cover for the poster, “it was remarkable how quickly everything came together.” He had previously worked with Chris Phillips, the editor of Backstreets, on a poster of an outtake photo from the “Born to Run” shoot and had been pleased with the result. “Even the printer donated his services for free,” Mr. Meola said. “I’m just happy we all came together on this.”

As a founding member of WhyHunger’s Artists Against Hunger and Poverty (AAH&P) program, which now includes more than 35 participating artists such as Jackson Browne, Brandi Carlile, Chicago, Jen Chapin, and Jacob Whitesides, Springsteen continues to make a philanthropic impact around the world by using his powerful musical platform as a tool to advocate for social and food justice.

The poster is available for purchase exclusively through Backstreets, the website and magazine devoted to all things Springsteen. Net proceeds from the sale of this poster will benefit WhyHunger’s work– to combat the root causes of hunger, poverty and injustice by supporting grassroots solutions and promoting self-reliance. Get yours today, before it sells out!

Rebecca Lichtenstein is going into her senior year at Emory University and is the current Communications Intern at WhyHunger.