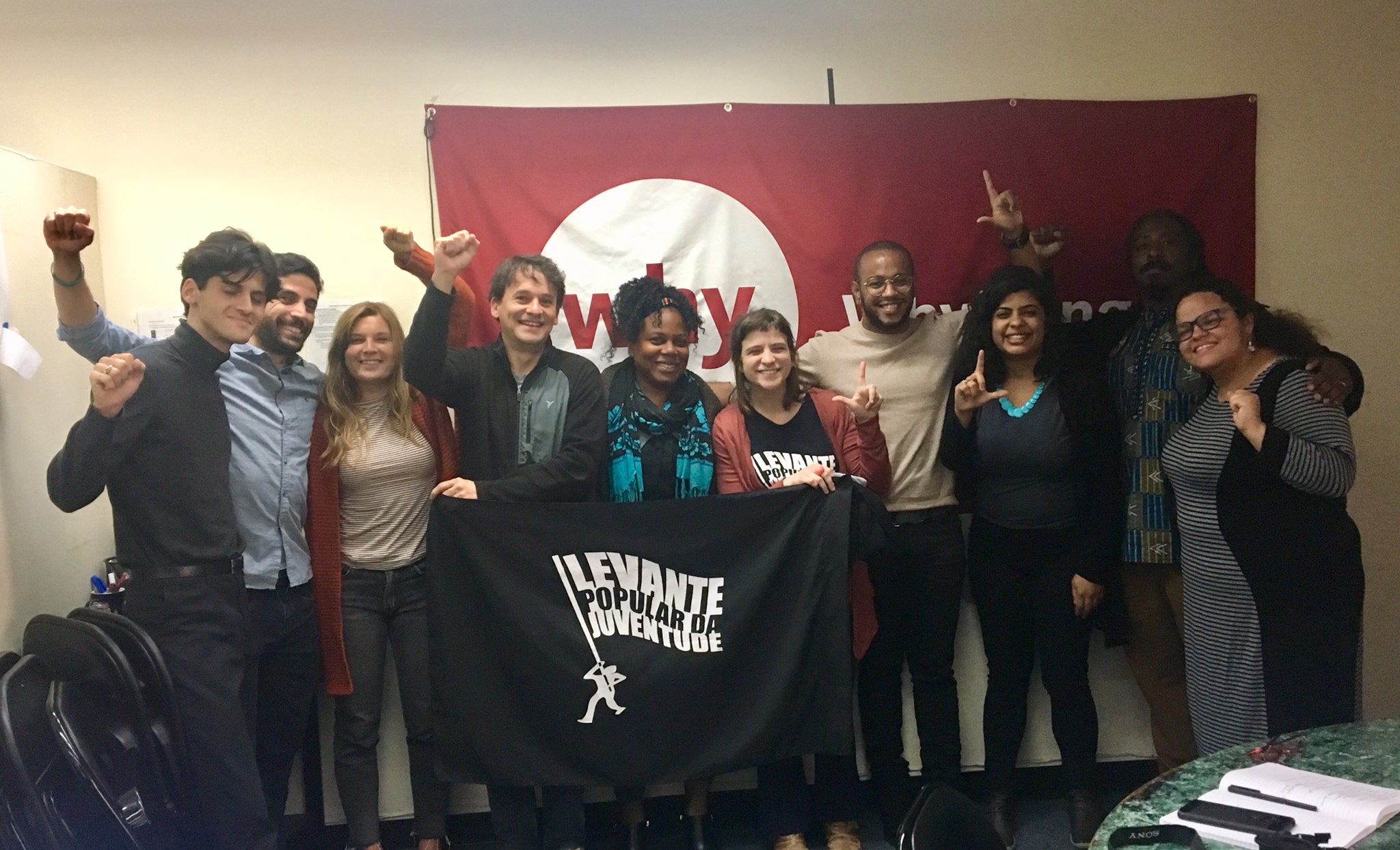 Mariana, Luiza and David of Levante and WhyHunger staff at the WhyHunger office

Between 1940 and 1970, Brazil began to urbanize at a rapid pace. The number of people living in cities increased from 15% to 50% largely as a result of the expansion of agribusiness and industrialization. To this effect, the Brazilian government founded the Institute for Colonization and Agrarian Reform (INCRA), which would oversee and administer land-use in what they saw as “underdeveloped” regions. Essentially, INCRA would sell large plots of land to big agribusiness, which would then use the land to grow cash crops like wheat or soy. Indigenous people, afro-descendant communities and other peasants that were evicted in the process either moved to cities or started working as farmworkers. This incited the mass organizing of rural families to reclaim their ancestral lands.

Born out of the land struggle in different communities, the Movimento dos Trabalhadores Rurais Sem Terra, or the Landless Workers movement (MST), whose objective has been to reclaim land through occupation and fight against the implicit social and environmental injustices, is currently Brazil’s largest social movement with 1.5 million members. Most of the progress that has been made in agrarian reform in Brazil can be attributed to the efforts of MST, rather than those of INCRA.

Inspired by social movements such as MST, young people took to the streets in protest of unjust policies and social inequality. Founded in 2012, Levante Popular de Juventude is a youth-led social movement that organizes young people in both urban and rural areas of Brazil to fight for the public interest.  On October 17th, 2019, Mariana Ferreira, David Liboreo & Luiza Troccoli, Representatives of Levante Popular de Juventude, joined WhyHunger for a discussion on youth organizing and social movements in Brazil and in the U.S. As an organization that seeks to address hunger at its root causes, we were able to find common ground on the importance of agroecology, reclaiming land from big agribusiness for the people and fighting for policy reform.

Mariana, Luiza and David discussed Levante’s three fronts: Student, Territorial and Peasant. Their Student front mobilizes young people in universities and high schools. The Peasant front provides a platform for rural youth strengthening the organizing by MST and other social movements in reclaiming land and creating infrastructure for rural families. Their Territorial front, which Mariana described as the most critical, supports young people of Brazil’s Favelas, or impoverished urban areas, to organize for their interests and get access to education.

We sat down with Mariana and Luiza to discuss some more specific questions about Levante’s operations, youth organizing, and the importance of international solidarity.

Q: How did you come to identify these three fronts?

Luiza: The Peasant front was easy to identity. It came out of the movement started by MST. The idea of organizing people in their university, their school and in the neighborhood they live, this idea of organizing locally, is a response to this contradiction that capitalism presents us with. In the past, workers organized in unions, but as capitalism has changed the way we work. With freelance jobs, people working from home and companies outsourcing, people are more disconnected from each other, making it more difficult to organize people in their place of work. So in this new scenario of capitalism we have to organize people in other places: such as where they live or where they study.

Q: What do you find are some of the most effective means to organize and mobilize large groups of people?

Mariana: We are still figuring this out ourselves. We are trying to develop a lot of tools to connect with young people. We have a website, but that isn’t everything. We have a big Facebook following, where we post videos and other content. We try to get our message across with some more lighthearted content like videos and jokes. Recently we started using Instagram and are working on developing a YouTube channel to inform people on labor rights and current politics.

Q: Do you find that everyone has access to social media now or are there groups of people you have difficulty reaching that way?

Luiza: The youth are easy to reach through social media, but we also know the importance of face-to-face conversations. Building networks is more about activities and actually doing stuff. You have to connect social media with real, in-person work.

Q: What has been your experience in the U.S. and what do you think is the importance of international cooperation for social movements?

Mariana: Internationalism is one of our main values. As a youth social movement, we know that young people across the world share many of the same challenges. Finding your first job, getting access to university education and becoming an adult…We think that these kinds of challenges which affect all young people show us the importance of connecting with one another to create a global youth movement. We want to show other social movements around the world that we are together in our struggle to try to transform society for the better.

Q: Are there ways in which people can get involved with your organization outside of Brazil?

Shortly after our interview, we received notice that a federal court had overturned a ruling to evict the Paulo Freire training center in the state of Pernambuco, a great victory for the Landless Workers Movement (MST) and Levante. The center was a valuable resource for the people of the Normandia settlement, offering training on agroecology and sustainability, but it also plays a vital role in creating the next generation of socially engaged citizens. The eviction was filed by INCRA, in line with President Jair Bolsonaro’s recent efforts to cut funding and support for agricultural reform. With the support of unions, social movements, artists and Levante, MST and the landless families were able to stand up against the eviction and ensure the continuation of this important community institution. This victory is representative of a larger struggle between two opposing models of agriculture and land-use: one in which families live in coexistence with the land and another in which big corporations use land for the extraction of capital.

To learn more about Levante, visit:

Alexander Roth is Communications Intern at WhyHunger and has a background in social science and cultural studies. He is interested in environmental justice, human geography and architecture, and aims to find creative ways to explore and discuss the relationship between communities and the built environment.