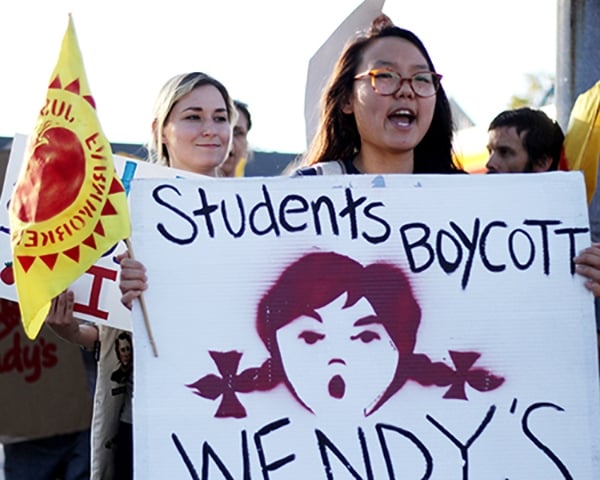 Wendy’s issues statement on boycott after months of silence. Silence was better.

As we write this on Wednesday evening, the nation prepares (and by “prepares” we mean curls into the fetal position on the couch in front of the TV…) for the third and final presidential debate.

But if you are like us and happened to catch Wendy’s new statement on the Fair Food movement’s national boycott, published yesterday on an obscure public relations blog dedicated to the discussion of Corporate Social Responsibility, then you were treated to a sort of pre-debate hors d’oeuvres plate, a similar mix of cheap innuendo, half-truths, and outright fabrications, just in smaller bites.

In any event, now that the Wendy’s statement is out there, we face the thankless task of responding to mountains of misinformation without just throwing up our hands and walking off stage. We’ll do our level best.

Before we get started, you should first read Wendy’s statement, entitled “When the Easy Answer Isn’t the Right One,” by Wendy’s Senior Vice President for Communications, Liliana Esposito, for yourself. Go ahead, we’ll wait…

Let’s start with the cheap innuendo…

And it happens to be the one passage Wendy’s chose to bold in the entire statement. It reads:

So why does CIW have a problem with Wendy’s? Because we buy a lot of tomatoes for which they don’t receive any money. The Fair Food program primarily operates in Florida and Wendy’s does not currently purchase tomatoes in Florida… and that’s at the heart of these protests.

Anyone without knowledge of how the Fair Food Program actually works reading this bolded passage would reasonably conclude that, a) when participating buyers pay the Penny-per-Pound premium on purchases of Florida tomatoes, that money goes to the CIW, and, b) Fair Food protests were designed solely to force companies to pay money to the CIW. Wendy’s strongly implies that the protests are not motivated by the imperative of social and economic justice for the workers who pick Wendy’s tomatoes, but are rather some sort of elaborate corporate shakedown.

This is a recycled version of the accusation made by a former corporate vice president of Burger King (right) during that campaign back in 2008. Using his daughter’s online alias to post comments anonymously, the Burger King executive wrote of the CIW’s campaign and the protests:

“The CIW is an attack organization lining the leaders pockets … They make up issues and collect money from dupes that believe their story. To (sic) bad the people protesting don’t have a clue regarding the facts. A bunch of fools!” read more

His words echoed the approach of Burger King’s CEO at the time, John Chidsey, who made similar statements in public to those made online above:

Chidsey delivered a lecture at his alma mater, Davidson College, and made statements almost identical to the ones now linked to Grover. Chidsey said of dealing with CIW, “The union said the money has to go in the union coffers and ‘we’ll decide what’s better for the workers.’” read more

Of course, even casual observers of Campaign for Fair Food history know how that chapter turned out. The executive vice president responsible for the anonymous comments was fired, Burger King signed a Fair Food agreement with the CIW and is today an important partner in the Presidential Medal-winning Fair Food Program, and the CEO made the following statement in the joint press release announcing the company’s agreement with the CIW:

“We are pleased to now be working together with the CIW to further the common goal of improving Florida tomato farmworkers’ wages, working conditions and lives. The CIW has been at the forefront of efforts to improve farm labor conditions, exposing abuses and driving socially responsible purchasing and work practices in the Florida tomato fields. We apologize for any negative statements about the CIW or its motives previously attributed to BKC or its employees and now realize that those statements were wrong. Today we turn a new page in our relationship and begin a new chapter of real progress for Florida farmworkers.” read more

That history might profitably serve as a cautionary tale for any Wendy’s communications executives who might be contemplating further exercises like the cheap innuendo bolded in today’s statement.

And now for the outright fabrications…

The Wendy’s statement also displays little concern for the truth. It claims:

“… The CIW requires participants to pay an additional fee directly to the tomato harvesters that work for the growers, on top of the price we already pay for the product… but we don’t believe we should pay another company’s employees”
“…the Coalition of Immokalee Workers (CIW), an activist group that represents tomato harvesters in the Immokalee region of Florida…. Where we differ with the CIW is in their belief that we should focus on a single group of people – in this case, tomato harvesters in one region in Florida.”

Participating Buyers do not pay farmworkers directly. The Penny-per-Pound premium appears as a separate line item on a buyer’s invoice or is built into the price (as the buyer prefers), and so is paid to the growers through regular business channels. It is then pooled by each grower with the premium payments of other Program buyers and distributed by the grower to its workers in the form of a bonus, through regular payroll channels. In fact, Participating Buyers have no direct contact of any kind with workers in the FFP. [Again, like the innuendo echoing Burger King’s earlier missteps, this one isn’t even original, but simply borrowed from Publix’s tired bag of public relations tricks — “However, we will not pay employees of other companies directly for their labor” — and thrown out there in hope that it might fool anyone new to the campaign.]

The CIW’s Fair Food Agreements cover nearly 35,000 workers in seven states, not “one region of Florida” and one crop as Wendy’s statement would have it. Today the Fair Food Program operates along most of the East Coast (in Florida, Georgia, South Carolina, North Carolina, Maryland, Virginia and New Jersey) and in three crops (tomatoes, peppers, and strawberries).

And finally the half-truths…

First, a small, but not insignificant one:

“It sounds simple enough, and you may wonder why we have resisted this demand, particularly since some of our competitors joined the Fair Food Program after they were protested by the group.”

Of course, all of Wendy’s key competitors — McDonald’s, Burger King, Subway, Taco Bell, and Chipotle — have joined the Fair Food Program, not “some.” At this point, Wendy’s is deriving a real competitive cost advantage from fostering farmworker poverty in its supply chain by refusing to join the FFP.

But the following half-truth is perhaps the most significant passage of the entire statement. Here’s how Wendy’s describes the company’s efforts to monitor its supply chain in Mexico — a country, it bears repeating, whose produce industry was the subject of a horrifying four-part series by the LA Times just two years ago that exposed widespread human rights violations ranging from endemic child labor and sexual assault to unimaginable living conditions and even modern-day slavery:

All of our suppliers, including those in Mexico, are subject to the same quality and food safety standards, and we actively perform over 1,000 audits annually against those standards. We spend a LOT of time with our suppliers and their teams – on farms, in fields, in processing houses, and with distributors – it’s truly a farm to fork commitment for us. Our professionals are constantly on the road visiting or auditing suppliers because we believe that’s the best way to ensure that our standards are being upheld. I believe that our team of road warriors is the absolute best in the business.

But, it doesn’t stop there. Every Wendy’s supplier must go through a rigorous certification process, voluntarily participating in a whole host of auditing processes. We visit the farms and ranches where our fresh produce grows (iceberg, romaine, spring mix, tomatoes, strawberries, blackberries, etc.) in order to assess quality and food safety, and to ensure everyone in that operation – from business leaders to farm workers – understands and follows good and safe agricultural practices. We have a comprehensive Supplier Code of Conduct which requires our suppliers – for tomatoes and everything else we buy – to adhere to high standards for integrity and business practices.

In context, Wendy’s statement strongly suggests that its auditing processes in Mexico and its freshly minted code of conduct are the equivalent of the Fair Food Program’s monitoring and enforcement of human rights and the Fair Food Code of Conduct. The statement doesn’t come right out and say that, of course, because to make that patently false claim would be laughable on its face and far too easy to debunk. But by repeating, and repeating, and repeating… how much time their “team of road warriors” spends visiting their suppliers, one is left with the impression that any violations of human rights would naturally come to light during their “quality and food safety” dragnet.

But that’s not how human rights monitoring and enforcement works. In fact, when read carefully, the statement does not even pretend that Wendy’s audits for workers’ human rights. Despite significant emphasis on their auditing efforts in Mexico, even Wendy’s can’t bring itself to claim that fundamental labor and civil rights — which are the central focus of the Fair Food program — play any meaningful role in the company’s auditing process. And that’s why this half-truth ultimately falls short, because the effort to equate “quality and food safety” audits with the kind of in-depth, worker-driven, market-enforced human rights audits at the heart of the Fair Food Program just won’t hold water, and even Wendy’s knows it.

Meanwhile, here’s the truth about the Fair Food Program: The Fair Food Program is the most effective, indeed transformative, 21st century paradigm for the protection of human rights in corporate supply chains. It has been recognized by human rights observers from the United Nations to the White House, the US State Department, the Equal Employment Opportunities Commission, and the Department of Labor. The Program has been acclaimed by two former presidents, and most recently received the Presidential Medal for “extraordinary efforts in combating human trafficking” from President Obama. Moreover, leading academic researchers have called the Program “the best workplace-monitoring Program” in the U.S.; “the best working environment in American agriculture,” and most recently, “substantially more successful than other corporate compliance programs.”

In short, whatever it is the company audits in Mexico, Wendy’s monitoring program doesn’t hold a candle to the Fair Food Program.

Continue reading at the CIW blog