Our friends at the Coalition of Immokalee Workers and allies around the country have been stepping up the pressure on recalcitrant fast food giant Wendy’s, the last major fast food chain to hold out and refuse to join the CIW’s groundbreaking Fair Food Program. In addition to rallies on Wendy’s home turf of Ohio and a social media campaign featuring CIW supporters nationwide telling the company to get on board, Civil Eats published a letter last week signed by more than 75 food movement leaders urging the company “to act immediately to ensure that the rights and dignity of farmworkers who harvest the tomatoes sold in Wendy’s products nationwide be respected by committing [the] company to a social responsibility program that was recently heralded in The Washington Post as ‘one of the great human rights success stories of our day.'” 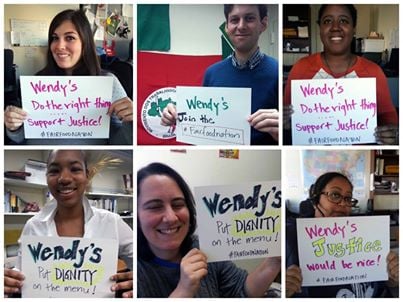 WhyHunger staff to Wendy’s: How about some dignity with those burgers?

The letter goes on:

By refusing to put its weight behind this program, Wendy’s is lagging behind its competitors as the only major fast food corporation in the US that has yet to become part of this proven approach to a more sustainable supply chain. What’s more, when you [Wendy’s CEO], Mr. Brolick, helmed Taco Bell in 2005 as the company became the first Fair Food Program signatory, you stated at the time of the announcement, “We have indicated that any solution must be industry-wide… but we are willing to play a leadership role within our industry to be part of the solution. We hope others in the restaurant industry and supermarket retail trade will follow our leadership.” Now, eight years later, Wendy’s is “the rest of the industry” that needs to join the Program. …

Wendy’s promotes its sourcing of “honest ingredients” and its sustainable business practices, to which we as food justice advocates are also dedicated. But you must understand that today’s consumers expect and demand that farmworkers, whose work makes possible Wendy’s continued growth, also constitute an integral part of that vision. To portray your company as taking the necessary steps to uphold farmworker rights while doing no such thing–when a proven and verifiable solution exists–can only be described as disingenuous.

As Wendy’s looks to modernize its brand to position itself as “a cut above” their fast-food counterparts, it must understand that a new logo is insufficient to transform an old-fashioned approach to human rights.  Only a true commitment to just treatment of workers in your supply chain can assure Wendy’s of smooth sailing in the 21st Century. We within the food justice movement urge you to seize this moment as an opportunity to uphold those values and act immediately to join with the CIW and the Florida tomato industry in building a better tomorrow.

To read the whole letter, along with an excellent introduction by Anna Lappe, click here. WhyHunger is proud to have signed this important letter; to sign on your organization, click here.

Black Farmers in Cuba
Answering the Call for Justice

The ROOT Report: Is Our Food Fair? The struggle for better wages and working conditions in Florida