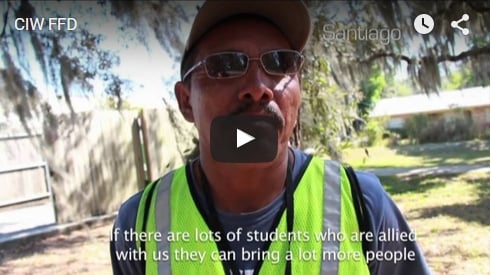 This weekend, the Coalition of Immokalee Workers (CIW) is ending their ten-day “Now Is the Time” tour with rallies in Lakeland, Florida, headquarters of Publix supermarkets, asking the grocery giant to come to the table and join the Fair Food Program. In southwestern Wisconsin, the Family Farm Defenders (FFD) are gathering to honor the next generation of activist farmers with the John Kinsman Beginning Farmer Food Sovereignty Prize–and in so doing, honor John Kinsman himself, the great activist farmer who passed away in January.

The two events are almost 1,400 miles apart, but the two groups continue to stand in solidarity with each other, one year removed from last winter’s Farm Labor Reality Tour. In 2013, Maine farmer Bob St. Peter, co-founder of Food for Maine’s Future and FFD board member, traveled with his family from Maine to rural Wisconsin and Minneapolis to meet with FFD member farmers and learn about the ongoing crisis in small-scale dairy farming–and then down to Florida to walk 200 miles with the CIW’s March for Rights, Respect and Fair Food. They were joined on the march in Florida by some of those same Wisconsin dairy farmers, including John Kinsman, on what would turn out to be his final activist trip. The tour aimed to highlight the common struggles faced by all those laboring in the food system and explore how to work together rather than being pitted against each other.

“We will not allow farmers and farmworkers to be pitted against each other,” said Bob at the closing rally of the march on the final day of the tour. “We don’t want to fight over a very small piece of pie. We want a bigger pie.”

One year after the Farm Labor Reality Tour, as FFD and CIW come together in support of their own struggles and those of their allies–and WhyHunger joins both celebrations–we invite you to watch this short film from the tour, produced by FFD board members Sherwin Ovid and Amy Mall.