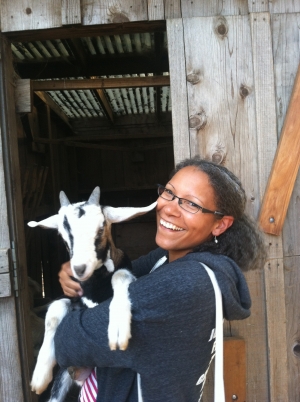 New Food Justice Voices issue out now! Our Food Justice Voices series is intended to amplify the voices and experiences of grassroots leaders that aren’t heard enough, while creating awareness and educating readers on various issues connected to hunger and poverty.

A Farmer Like Me: Exploring Hunger, Race and Farming in America is the story of farm and food justice activist Lorrie Clevenger as she navigates the true meaning of food justice from her hometown in rural Missouri to the fields of upstate New York. Lorrie is currently a full time farmer on Rise & Root Farm, a 3-acre farm in rural Chester, NY, that she founded together with three other women urban growers. The women sustainably farm a wide range of vegetables, heirloom tomatoes, cut flowers, and more. They sell the goods to restaurants nearby and in Manhattan and at three farmers markets. She is also a founding member of Black Urban Growers (BUGs), an organization committed to building networks and community support for Black growers and Farm School NYC, helping to develop its urban farming education program. In this piece, Lorrie shares her childhood foundation, experience as a Black farmer and her vision on how we can make our agricultural system better.

Q: What led you to become a full-time farmer?

A: Once I started working at Just Food, I began meeting Black community leaders and elders who gardened or farmed. I also eventually got a plot myself at Taqwa Community Farm in the South Bronx. Seeing people like Karen (Washington), and farmers Abu Talib and Bobby Watson at Taqwa—African-American New Yorkers who started community gardens and who had chosen to make agriculture such a big part of their lives— inspired me to think that farming might be something I would consider doing. Hearing stories from Karen and Talib, learning to tend my own little plot of land, and tasting the fruits of my own labor were all key in helping me break the slavery narrative that I associated with Black people farming. It began to show me that growing food has nothing to do with slavery. Slavery is about power and oppression; it has nothing to do with the skill and the desire to grow food. Through Karen and Talib, I began to develop a whole new narrative and image around Black people and farming. Talib talked about what he learned from his aunt in South Carolina about the medicinal uses of wild plants. He taught me to see community differently; his community included the bees and the critters in the soil, and it was important to him to take care of them as well. He helped me to reconnect to the land as a source of healing and nourishment, separating it from the trauma of slavery. It was Talib who first told me, “Whoever controls your breadbasket controls your destiny.” And from Karen, I learned the power of growing food as an act of resistance, a form of participatory democracy and a tool for community organizing. “Each one teach one,” Karen often says, and acts on it. Inspired by what I learned from Talib and Karen, I began to want to farm. It was as an act of resistance, and it was because I wanted the power of knowing where my food comes from and that it wasn’t produced at the expense and exploitation of another person or the land. And knowing what my mentors did for me, I wanted to be that Black farmer that inspired someone else to question their ideas of being Black and farming in the United States. And perhaps most importantly, whenever I worked in my little 10-by-13-foot plot at Taqwa, I didn’t want to go home. I would plan to work for two hours and still be there six hours later. When you’re doing something you love, time just doesn’t exist. I started farming because I enjoyed it and because I wanted there to be people who look like me farming. So I decided, why not be that person?