What does Ferguson mean for the food justice movement? Find out in our new thought-provoking series with a special introduction and Issue 1 out now! To lift up critical voices of the movement, WhyHunger’s Beatriz Beckford facilitated a national call with dynamic organizers and activists across the country to discuss the connection between the oppression that black communities face at the hands of police violence and at the hands of an unjust food system. Over the next few months we’ll release a powerful collection featuring the grassroots voices of black leaders working within movement building and food justice to create real social change.  We hope you join us for this important conversation and contribute your thoughts, so read the series introduction and the first issue by Malik Yakini, Executive Director of the Detroit Black Community Food Security Network and join us for a Twitter Chat on 9/24 at 1pm featuring Malik Yakini and other activists using hashtag #FoodJusticeVoices.

Listen to full audio of the call below. 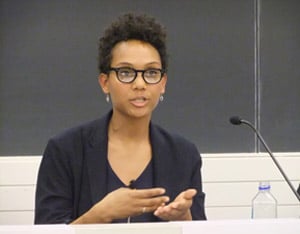 So it starts with a question.  What does Ferguson mean for the Food Justice Movement?  This is a question I have grappled with personally and in community with some of the most brilliant black organizers and activists I know from across the country for the past year.  We cannot hide or avoid it, we cannot ignore the connections and or place Ferguson and Food Justice in separate stories in different books on different shelves in different houses.

Asking what Ferguson means for Food Justice has forced me to confront my personal hesitation to juxtapose the connection between the death of black people at the hands of the police and state, and the death of black people at the hands of the corporate food system intentionally reinforced by the state. This deep reflection has not been without pain or struggle, it has not been without deep learning and transformation, and has pushed me to name both as extreme acts of violence against black bodies.  It is important that I and other Food Justice activists personally and politically affirm what black nationalists, black radical feminists, queer activists, black farmers, abolitionists, community health advocates and members from communities across the country, including my own, have framed as state violence that restricts the self-determination of black people, and name explicitly all the ways that violence shows up in their communities as racism and anti-blackness.

The intricacy of America’s systems of oppression have always used land and food as weapons of choice. I say this not to take away any urgency from the extreme state violence black communities face at the hands of the state via a militarized police, but to make some important connections between the extreme and the everyday manifestations of violence against black people.

I hope to lift up the silent often unnamed killers of black bodies that are related to food, land and the lack thereof.  This type of violence touches us all, our friends, family members and children.  Black and brown children are now expected to live shorter lives than their parents because of diet related illness including diabetes and obesity. And it is important to understand that this is not about individual behaviors, this is about a system that is built to provide the illusion of choice.  It is about a system of food apartheid in black and brown communities across the country like the Bronx NY, Jackson MS, and Baltimore MD where politically-sanctioned redlining restricts access to healthy food.  It is about the Food Justice movement’s inability to name race and anti-blackness as the root of systemic food and land oppression, and further the food justice movement’s lack of a mass based strategy grounded in organizing and direct action.

What Ferguson Means for the Food Justice Movement: Issue 1 by Malik Yakini 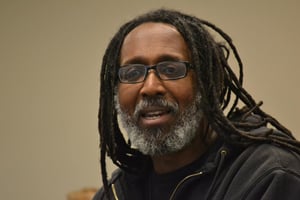 Prompt 1: How do we define food justice with a racial justice lens?

Ok. So starting with just looking at the demographics of the United States, if we’re talking about food justice we have to be talking about people of color. We have to be talking about people of African descent, people who are called Hispanics, Native Americans, Asians – who, as we progress more into this century, will be the majority in this country and people who are defined as white will be the minority. And as has already been said, the majority of work within the food system is done by people of color, both the planting and cultivating and harvesting of food and the processing of food in plants is done by people of color, and those most impacted by food insecurity are people of color. So we can’t address the issue of food justice unless we look at it through a racial justice lens. It’s impossible. The other aspect of it, I just wanna raise up is, in order to have a food justice movement which really addresses racial justice, the food justice movement has to be led by those who are most impacted by food insecurity and the other injustices within the food system.

Prompt 2: Considering the fact that our movements (food, labor, gender, etc.,) are segmented and often divorced of a racial justice analysis, how do we create movement interdependency that acknowledges racial biases and institutional racism as root cause for all these other issues?

I think a lot of it rests around how we frame our work. And for me, either we can be revolutionary – which in my mind means that we’re really working to replace the current system of capitalism, white supremacy and patriarchy with systems that assure justice and equity – or we can be reformist, meaning that we’re just trying to “make life better on the plantation” as one of my elders used to say. We’re not trying to really have a fundamental shift in power, but we’re trying to make life more comfortable. Which might look like having greater access to food in our community. Or it might look like lifting up Black chefs or whatever. So I think, if in fact our work is revolutionary and we’re committed to a fundamental shift in power, then that has to be part of our ongoing discourse. It has to be part of the conversation we have with people as we’re doing community organizing. It has to be part of the conversation we’re having within the larger movement. So that we’re intentionally really radicalizing the movement and moving away from the kind of cosmetic reform that might be proposed by some of the more elitist aspects within the movement. So I think by framing it in a more revolutionary way, we tie it to all of these other issues – we tie it to institutional racism, we tie it to the question of power, and we tie it to the question of a fundamental shift in power so that our people are empowered. So that we can have sovereignty and define our own destiny. The reality is that no people have food sovereignty unless they have sovereignty. Food sovereignty is tied to control and access to land and the reality is that unless you have control of land, and the ability to govern yourself, that you’re only gonna have nominal degrees of food sovereignty. So the question of food sovereignty is really tied to the larger question of sovereignty and freedom. 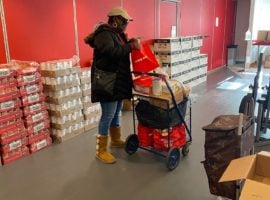 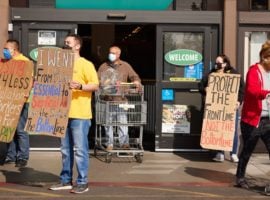