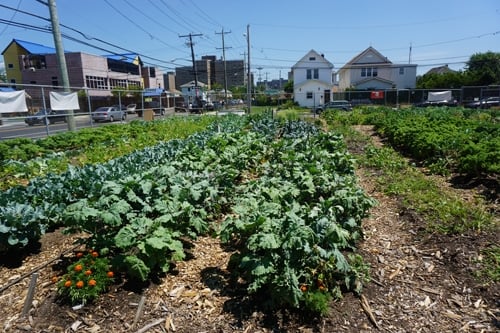 It was a hot and sunny Wednesday morning, as I set out at 9a.m. excited for the unknown towards the Bed-Stuy Campaign Against Hunger’s Healing Garden at Far Rockaway Farm to meet my colleagues and fellow interns at WhyHunger. Having taken class trips with extended stays on farms throughout my middle and high school years I was no stranger to “a day on the farm”; however, I had never worked on an urban farm in New York City and knew this trip was special because it was not only a volunteer day, but WhyHunger was also working with Bed-Stuy Campaign Against Hunger (BSCAH) to film a video project about the intersection of hunger and health and their work.

Once I arrived, we were given a tour of the farm by BSCAH’s Green Teen Internship Program supervisor, Sam. Afterwards, we were filmed as we sat down for an informative Q&A session with Sam to learn about the farm. The Healing Garden in the Far Rockaway neighborhood of Queens is a production farm used to grow organic produce and even has chickens onsite to produce fresh eggs. BSCAH’S Green Teen program employs 15 local youth in the community to maintain the farm and its programs. As supervisor and a former Green Teen herself, Sam oversees these youth workers, and helps manage the farm and harvest produce along with a host of other tasks. The Healing Garden, Sam explained, was established in order to link agriculture and nutrition with community and economic development. And that connection was easy to see as I got to work! I spoke with the teens I worked alongside and found that they lived in the community and some had received their first exposure to gardening and farming practices through BSCAH’s program. 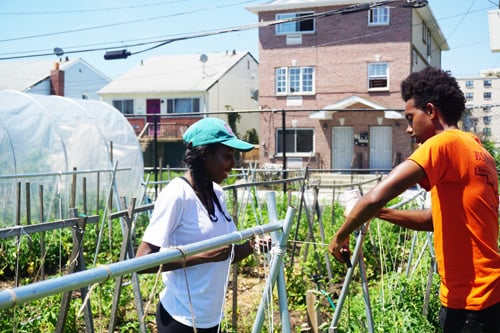 From the info session with Sam, I learned about an initiative that I did not get to see firsthand but was inspired by, the veggie prescriptions partnership between the Healing Garden and the nearby Addabbo Family Health Center. Those who suffer with diet-related diseases, like diabetes and high blood pressure, can get a “prescription” for produce from the clinic and bring it to the farm to pick up their free meds – fresh, organic fruits and vegetables grown by teens. This is a unique and creative initiative that promotes good health in the community. As a Public Health major at my university, I thought this initiative was a truly innovative approach because not only does it increase accessibility to fresh produce, but it encourages maintaining a long term relationship with a healthcare provider and connects more people in the community to the farm.

After the info session, I was assigned the task of tying tomato stalks that were hanging low on the soil or loose, to a higher wooden post. I worked with two boys, who were employed as Green Teen interns. As fellow interns and all the same age, I learned that one of the boys had fairly recently migrated from Jamaica with his mother and younger brother, who was also a Green Teen intern. As residents of the Far Rockaway community, this was his second summer as an intern here and he intended to continue into the fall as well. He told me his mother comes to their market and has incorporated much of the farm produce into her dinner recipes. While chopping kale into compost, his younger brother and I talked about our shared Jamaican family background and how time spent at the farm has positively affected his transition to New York. By 2 p.m. my chopping days were over and WhyHunger, the film crew, and all the BSCAH staff began to exit the farm for the end of the workday. After a hug goodbye from my compost-chopping partner, I felt much appreciation and gratitude. As a born and bred city girl, I was curious but not initially thrilled about the idea of laboring on this sunny, 91-degree day. However, filled with great experiences and connections at the end of the workday, my perspective was completely changed and I was grateful for the knowledge and exposure I gained about the farm from those who worked there. As I left, I questioned, is urban farming in my future? I do not know, but I certainly would be open to it! Not just a beautiful green space, the Healing Garden at the Far Rockaway Farm further unites the community, partners with local entities for health promotion, increases accessibility to organic and local produce, and contributes economically to the area. In addition, it gave me a lesson on agroecology right in my own city.