I recently returned from a three-day meeting in Seattle hosted by the Community Alliance for Global Justice (CAGJ). For four years, CAGJ, along with WhyHunger and other U.S. allies, worked to organize a gathering between U.S. and African allies to discuss common strategies to fight corporate control of our food system. 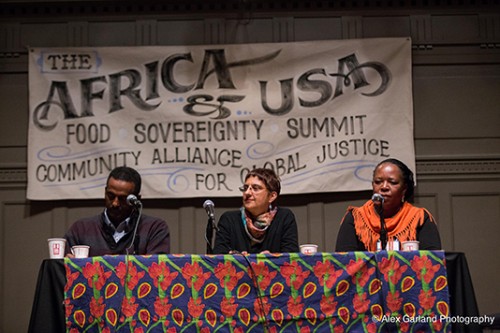 Convening eight African allies from five different African countries and 15 U.S. based organizations, the U.S. & Africa Food Sovereignty Strategy Summit was held October 10-13 in Seattle, the home base of the Bill and Melinda Gates Foundation. The Foundation is a major supporter of the Alliance for the Green Revolution in Africa (AGRA) that is disseminating genetically engineered seeds, also known as GMOs, and other agricultural practices mostly alien to local small-scale farmers, as the solution to hunger. These practices create dependency on specific products and seeds and often force farmers into debt. Once farmers are not able to pay the creditors, they will be out of business, without a job, a home and most importantly, without food. As Herschelle Milford from the Surplus People’s Project in South Africa points out, “Gates Foundation is on the wrong side of history and causing more harm than good to many African families and farmers by not listening to or sufficiently consulting with them. They don’t want GMOs and pesticides. They want food sovereignty and agrarian reform.”

WhyHunger stands in solidarity with our allies against the imposition of a new Green Revolution in Africa. Based on our experiences here in the U.S., we reject the imposition of false solutions to hunger that damage the environment and undermine social justice, such as industrial agriculture, GMOs and pesticides. Echoing our friends from CAGJ, we work for healthy foods for all, decent living wages for farmworkers, and the right of communities to decide their own food policies, including what to plant and what to eat. From Seattle (and from New York City) with love: No to GMOs and Green Revolution in Africa.

Statement of the African and U.S. Food Sovereignty Summit

We are brought together by a shared belief in just, sustainable and equitable food for all. We share a concern over the dangerous loss of agricultural biodiversity and of the loss of dignified and viable livelihoods in the countryside.

In great appreciation of the wisdom we each shared coming from our diverse cultures, struggles and experiences that are all a reflection of our shared humanity:

We stand together against the corporate control of our food systems, the lack of accountability of global institutions like the G8 New Alliance For Food Security and Nutrition, the Global Agriculture and Food Security Program (GAFSP), the United States (US) government’s Feed the Future Initiative, the Grow Africa Partnership, the Gates Foundation and its Alliance for a Green Revolution in Africa (AGRA), and others, that are forcing their policies and institutions upon the farmers of the world to open up markets and create spaces for multinationals to secure profits; against the monopolization of our seeds that criminalizes the historical farm practices of saving, sharing, selling and exchanging seeds; against the displacement and dispossession of small-scale farm producers and workers from their lands; against the new Green Revolution, the global Free Trade Agreements, “climate-smart agriculture” and “sustainable intensification.”

We pledge solidarity with the struggles of each of our organizations and with the global food sovereignty movement, and will work in mutual support to amplify the voices of the people on the ground fighting for food sovereignty, share information with the general public about food sovereignty and agroecology, and expose the myths underlying the false idea that corporate agriculture is necessary to “feed the world.”