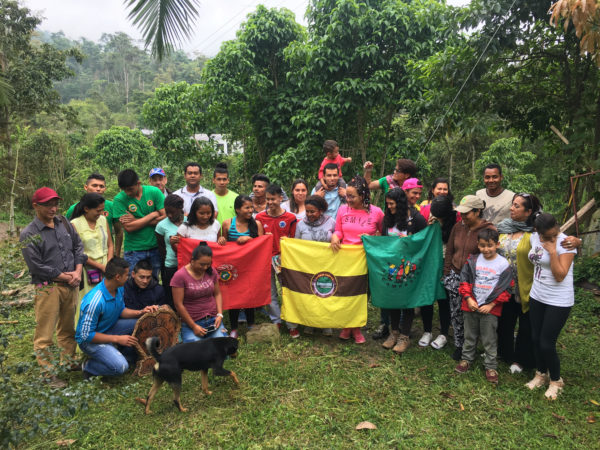 The IALA María Cano students refer to themselves as “educadores y educandos,” both educators and learners, creating a nontraditional methodology for learning exchange. Here they unite as a group to send a reply video message of solidarity to another IALA school in Venezuela.

Driving into el pueblito1 that is Viotá, Cundinamarca, located in the outskirts of Bogotá, Colombia. The breeze is crisp, the air liberated from city pollution, the scene dominated by green. Further into el campo2 the ride gets progressively bumpier, the pavement rockier. The road curves and loops, hugging the mountain it’s built on. Its narrow groundwork appears to fit only the size of one passing car, yet still the drivers always know how to make room for each other, receiving each other’s presence with a beep saludo3 as they drive by. We pass structures of bricks laid out in stacks; these uncompleted jobs represent a vision plus a lack of resources. Kids kick deflated soccer balls. Machetes clank.

We arrived to the gates of the Instituto Agroecólogico Latinoamericao4 (IALA) María Cano. This school, a branch inspired from the international solidarity network La Via Campesina International, serves as an education space for campesino youth from all sectors of Colombia, predominantly of indigenous and afro descendant backgrounds, to come learn about incorporating agroecological concepts within their own local communities’ systems of agriculture, politics, and rural economies.I was excited, nervous. This was a place I had pictured for a long time, a moment I had anticipated, envisioned. My mother spent her childhood years in this pueblo5, this place I always heard about but never knew, so when I learned about this school’s existence and mission through the WhyHunger organization, I knew I wanted to go. I had read so much from afar about campesino6 movements; I felt ecstatic to actually be there, to connect with their perspectives and lifestyles, something I had already felt close to on an ancestral and hereditary level.

I was eager to explain my interest and hear everything they had to share. They slowed my intrinsic New York pace, asked me if I was hungry and offered me lunch. Everything is slower in el campo, graced with mindfulness and patience.

I began conversing with some of the teachers of the school over a jugo de guanabana en leche7. It didn’t take long for my support for the “food justice” concept to arise, and with the initial articulation of these words, “justica alimentaria,” it was almost as if I had lost them. Their explanation as to why they view their work through a different lens highlighted three things:

The lesson taken away from the holistic experience is that of a permaculture picture. The agroecology model unites a global community that shares a vision for which our relationship with food, planet, economy, and each other can harmoniously coexist. However, when considering distinct places, this ideological umbrella zooms into different community contexts, where the communities themselves are the ones to highlight their specific needs and solutions.

In the US we talk about food justice as a means to create access to healthy foods in food deserts, which disproportionately affect low income peoples of color, as a means to provide food security and wholesome nutrition to marginalized communities. Colombia rather, is a country of campesinos with abundant biodiversity, soil and sunny season to promote growing food, therefore the uttermost priority is not feeding the hungry or creating access to nutrition, since even most of the poorest poor still have access to their huerta casera10.

Instead, their agroecology focuses on defending ancestral knowledge, campesino identity and integrity, preserving seeds and soil from invasive and transgenic agrochemical corporations, educating and empowering campesino youth to cultivate a political agenda that will justly serve their pueblos and retire them from a cycle of rural poverty. Their framework is an expression of solidarity between campesino neighbors, who unify under a common class struggle and move forward together. Furthermore, their theme of indigeneity and native identity sprouted me into a deeper connection with my own roots, and it is in those insights and analyzations about my very self, my placement within and overlaps of my own sociocultural circles, that I can bring perspective to this agroecological movement.

Paola received her bachelor’s degree in psychological and sociological studies from Binghamton University, with a focus on sociology of food systems. She’s worked with rural farms in upstate NY, Malaysia and Colombia, DSNY’s 0 waste by 2030 mission, overseas permaculture and rural justice projects, Grow NYC’s community teaching garden, countless compost windrows, and food cooperatives. She became involved with WhyHunger in December 2017 as an act of solidarity with the anti-hunger community, and has since participated in agroecological network events, along with La Via Campesina and Friends of the ATC.