by Tristan Quinn-Thibodeau, Outreach and Partnerships Manager of the Global Movements Program

[Ed note: As we’ve been reporting, WhyHunger’s Tristan Quinn-Thibodeau has been at the Rio +20 UN sustainable development summit. The Summit ended yesterday, but at the end of last week, Tristan sent us these notes about his time there.]

My experience at Rio +20 has been amazing. I will certainly miss the cavernous food court in pavilion two capable of providing lunch to ten thousand people, the hundreds of people searching for those with influence and pressing their issues and their case for human rights, sitting next to amazing social movement and NGO leaders on the three- to four-hour round trip shuttle ride to the Summit, the coconuts you can both eat and drink for only $2 at the beach-side snack shacks, and the monument of Christ the Redeemer standing over the city and promising meaningful hope for tomorrow.

I have spent much more time on the inside of the official negotiations, where most civil society and NGO representatives are, than on the outside, where the vast majority of social movements are. Civil society groups have worked so hard to present their ideas and get them into the final text of the negotiations, and it’s incredible to see their effort paying off at the official level. I have spent my time in many meetings with delegates, sitting through hours of negotiations where governmental lawyers debate whether to “support,” “affirm,” re-affirm,” or “promote” basic human rights that were established seventy years ago, and reading the rapid reports of colleagues through a variety of ad hoc networks, updating everyone on the twists in the negotiations. The pressure exerted by just being in the negotiating room and then reporting who said what to others on the outside, is critical in this process.

The ideas that civil society leaders are proposing on the inside are very sensible, especially in agriculture. It seems like all those here who are working on agroecology – and there are many at this level, like Drs. Miguel Altieri, Hans Herren, and Vandana Shiva, among many other leaders– know that they have the better argument. Industrial food production leads to pollution, fewer jobs, unhealthier food, and distribution schemes that leave many hungry. Industrial agriculture has to brand itself as “sustainable” in order to survive, but only agroecology is actually sustainable. It has really been a privilege to be here to listen and work with these leaders. 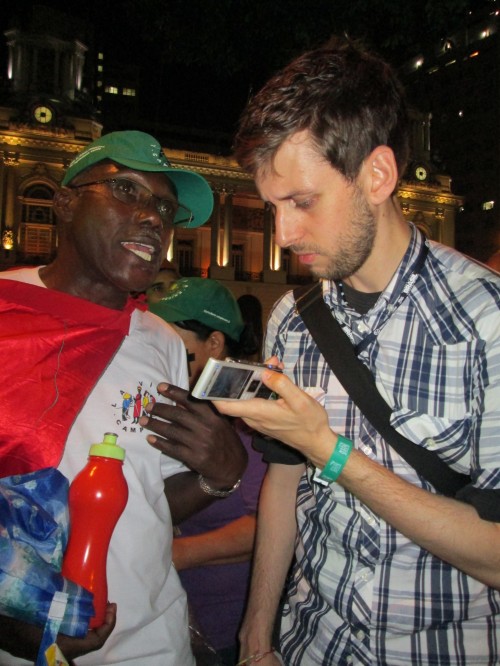 Sitting in the inside sessions has also impressed upon me the power of the official text. Subtle but legally binding language is incredibly important, because it is a way for governments to be held accountable to their commitments. For example, the current text includes a reference to the right to water, and all governments have said that – as of yesterday (this was written on June 21, during the final days of the Rio+20 negotiations) – they were all in consensus on this point. The text could change tomorrow, but from now on, no government can dispute the fact that there is a global consensus on the right to water. That is a big deal. Even the US, who has not officially recognized the International Covenant on Economic, Social, and Cultural Rights, can be held accountable for those rights because they are affirmed in the Rio+20 text, which the US had agreed to.

Similarly, it is critical that the right concepts and definitions are included in the text. Being legally bound to “the right to adequate food” is much different than “the right to food.” The “right to food” is much broader and could impact global trade policy, national antihunger policies, and even the labor conditions of workers in the food system. “Adequate” food, however, limits this human right and suggests that what is important is having enough food, rather than having healthy food or a just food system.

On the outside at the People’s Summit, people are very excited, they are very committed, and they are very confident. (It doesn’t hurt that the People’s Summit is being held on a gorgeous beach in downtown Rio!) My sense is that even though most consider Rio+20 to have been a failure, all the people, movements, and organizations at the People’s Summit are in agreement on what the future of society should look like and know they have the right answer. They see the lack of action on the part of governments in Rio+20 as merely a stalling tactic and overall think it is clear that governments are not proposing any real solutions. The president of one of the main UN civil society women’s groups framed the situation to me by saying that the job of civil society now is to prepare for the 2017 Summit on Sustainable Development. Although the Summit happens every year, she speculates that in five years, environmental and social issues will have gotten so bad that governments won’t be able to delay anymore and will be forced to ensure principles of human rights, justice, and democracy. As representatives of civil society and social movements, it will be our job then to continue to make sure that the UN recognizes these rights and principles and upholds them even more strongly.