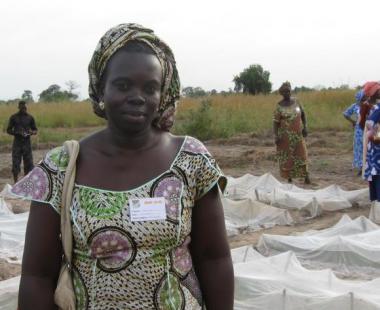 This is a guest post from Other Worlds, a women-driven education and movement support collaborative.

Other Worlds brings to you a 7-part article series featuring interviews with grassroots African leaders (mostly women) from Senegal, Mali, Kenya, Zimbabwe and South Africa. Each is working for seed and food sovereignty, the decolonization of Africa’s food system, and the preservation of traditional farming practices.

The interviews are with traditional farmers, activists, community organizers, policy advocates, seed-savers, and movement-builders (listed below) sharing global to local perspectives on agroecology and traditional peasant farming, the fight against GMOs and imperialist agriculture, supporting rural women and farmers in food production, land access, and livelihood, and cultural preservation through seed saving and food sovereignty. The series features leaders like Gathuru Mburu from Kenya’s Institute for Culture and Ecology, African Biodiversity Network, and Alliance for Food Sovereignty in Africa and Elizabeth Mpofu from Zimbabwe Smallholder Organic Farmers Forum and La Via Campesina.

Up first is an interview with Mariama Sonko, a farmer and organizer in Casamance, Senegal. She is the National Coordinator of We Are the Solution, a campaign for food sovereignty led by rural women in West Africa.

From an Interview with Mariama Sonko, by Simone Adler and Beverly Bell:

Traditional, small-holder peasant agriculture is done by women. Women are the ones who save the seeds – the soul of the peasant population. This is to honor what women have inherited from their ancestors: the conservation of seeds as part of their knowledge to care for the whole family and nourish their communities.

The green revolution introduced GMOs in Africa. Technicians and researchers come to tell our producers about agriculture from the outside. They tell us that these modern varieties of [GMO] seeds are going to increase our yield. So we will produce a lot, fill up our stores – but soon we will be sick and in the cemeteries. Isn’t it better to grow less, eat well, have good health, live a long life, and pay attention to the generations to come? We reject agriculture that pollutes with chemicals, pesticides, GMOs.

Achieving our goals is a difficult struggle because we have few resources fighting against multinational corporations who have a lot of money. But development in Africa can’t take place on the backs of Africans, and Africa can’t develop without looking ahead for the children.

We Are the Solution is a campaign in West Africa led by rural women from Senegal, Burkina Faso, Mali, Ghana and Guinea, though we are a campaign of both women and men. Our vision is to truly promote ancestral knowledge and put pressure on our government to take seriously the preservation of our peasant agriculture.

The campaign has three objectives. First is the use and promotion of traditional knowledge transmitted from generation to generation, which supports food sovereignty and the preservation of peasant seeds. The second objective is to restore national policies favorable to agroecological peasant farming. And the third objective is the promotion of African agricultural production.