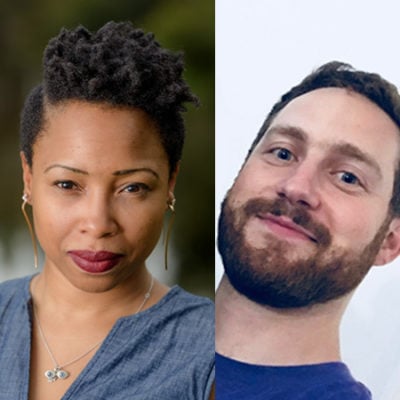 In the next issue of the Nourishing Change newsletter, we focus on discussing the dominant narrative around hunger. We spoke with two of our partners, Steven Deheeger, Senior Program Manager at City Harvest and Rae Gomes, the Food Justice Coordinator at the Brooklyn Neighborhood Health Action, about what dominant narrative they wish they could dismantle and what are alternative narratives they’d like to see more of. Read below and let us know if you have other ideas about how we can work to change the narrative around hunger.

So many to choose from! Can I say all of them? My top four might be:

I think dominant narratives exist for a reason. I see them as a function of hegemony – the control of one social group over others. In the United States, those hegemonic narratives service institutional, interpersonal, internalized, and ideological racism and white supremacy, sexism and male supremacy, transphobia, ableism, and so many other systems of oppression. So dominant narratives become ideological hegemony that keep those systems in place.

That said, I don’t necessarily see it as preventing us from doing our work so much as part of the work itself, and an important part at that. That’s where I see the role of political education in our work – building narratives that are liberating instead of oppressive.

Unfortunately, dominant narratives do have an impact. The dominant narrative that hunger is inevitable keeps us from fully imagining what it would take to build a future in which no one is food insecure. The narrative that hunger is apolitical keeps us, as an “anti-hunger” movement (itself a misnomer), from developing a collective power analysis or framework for understanding the root causes of hunger and aligning behind that analysis to organize together. The dominant narrative that individualizes hunger ignores the role of the systems of oppression and policies that create inequity, and often leads to programs and frameworks that focus on (and often pathologize) individuals who are directly impacted by food insecurity rather than addressing the systems that create it. And, lastly, the myth that we can end hunger through charity and service-provision both funnels resources that could otherwise be used to support social movements into the “hunger industrial complex” and marginalizes people who are directly impacted by food insecurity as victims or clients rather than leading organizing efforts and social movements to end hunger once and for all.

But despite all odds, we ARE imagining and building futures in which no one is food insecure, we ARE developing power analyses around which to organize, we ARE building movements that centers those who are most impacted, and I believe that WE WILL WIN!

I think the narratives are out there, it’s just that we, as nonprofit organizations, need to better about lifting them up. Instead, we often whitewash them – pun intended. The Black Youth Project 100 has a Black Queer Feminist Lens that I think we can all benefit from. Lately, I’ve been thinking about how organizations that are not led by people most impacted can get behind, support, resource, align with, be accountable to, and organize alongside those that are. I’d love to see more folks trying to end hunger by centering the narratives that are already out there.

In the South Bronx where I live and organize, we’re trying to push a narrative that draws the connections between gentrification, displacement and food insecurity. Because the South Bronx already has both the highest rates of food insecurity and the highest rates of residents at risk of displacement across New York City, the impending rezoning and gentrification we’re facing could be disastrous. Rent increases will mean more trips to pantries for households who are already food insecure and lead to many who were previously food secure becoming food insecure. Yet we have City Council members who give discretionary funds to food pantries while simultaneously inviting the luxury real-estate developers who fund their campaigns to rezone and gentrify the South Bronx. It’s beyond hypocritical.

So, our campaign for food secure futures in the South Bronx has a few slogans I think represent the narratives we’re trying to uplift, including, “Housing Not Hunger,” “Dill Not Displacement,” and “Ginger Not Gentrification.”

A Conversation with Rae Gomes, the Food Justice Coordinator at the Brooklyn Neighborhood Health Action, part of the Center for Health Equity in DOHMH

When examining health disparities in underserved communities, the term ‘food desert’ is usually invoked by advocates as a reason for food insecurity or a lack of access to healthy food in those communities. Food deserts are defined by the USDA as “low access community, [where] at least 500 people and/or at least 33 percent of the census tract’s population must reside more than one mile from a supermarket or large grocery store.”

The framing is problematic in two ways. While access to food could simply mean distance to a grocery store, a more expanded definition would take into consideration whether the community could easily source fresh, good quality, and affordable fruits and vegetables. With the popularity of food delivery service and meal kits, access to good quality produce could be overcome, only if you could afford it. Also, the USDA’s definition doesn’t take into consideration the availability of other food sources including community gardens, Community Supported Agriculture, and farmers markets.

Individuals and organizations who work to improve access for underserved communities have largely accepted the narrative of food deserts, without examining the underlying cause for the lack of access. Communities that have had to endure price gouging, dirty surroundings, and subpar produce in supermarkets, do not need to have more of the same. Working within frameworks and funding goals that don’t ultimately benefit the community has allowed these problems to persist.

Those who adopt this narrative often see food cooperatives, farmers markets, and community supported agriculture sites as fringe, and/or an upper middle-class exercise, which means these aren’t discussed as viable options to address food insecurity in underserved communities. These community-based solutions are really what we should be support, once we understand that the food desert narrative is inadequate.

We need to see that food deserts, unlike its naturalistic name suggests, aren’t natural, and that food apartheid is a more fitting explanation. Food apartheid is an intentional system of inequity, whereby residents could live in the same area (a designated “food desert” for example) and have different experiences sourcing food based on their race, income, class, and resources. With a framework that only depends on distance from a food store, the solution to have more food stores has proven, throughout history, to not be successful.

As the Food Justice Coordinator at the Brooklyn Neighborhood Health Action Center, part of the Center for Health Equity, I embrace our divisional goals which include making injustices visible and targeting investments in key communities, like Bedford Stuyvesant, East New York, and Brownsville. The Neighborhood Health Action Centers have historically institutionalized partnerships between city agencies and community organizations in order to address longstanding racial inequity and its consequential negative health outcomes. In that vein, I have been working with the Central Brooklyn Food Cooperative, a Black-led resident group working to open a food cooperative in Central Brooklyn. I also work with Isabahlia Ladies of Elegance, led by Brenda Duchene, a long-time Brownsville resident. Both initiatives were started by longtime residents to address food accessibility issues in Central Brooklyn. I’m also working to develop a presentation about the creation of food deserts and one on food hubs.

In general, we need to uplift long standing solutions from the community, be innovative where needed, and educate those in positions of power to fund and support us on what the community needs. For example, cooperatives have been created and championed by majority Black neighborhoods and have quietly addressed divestment in these communities. Imagine if we supported these solutions that directly benefit the communities, instead of large scale businesses, who only ultimately care about profit above community good.