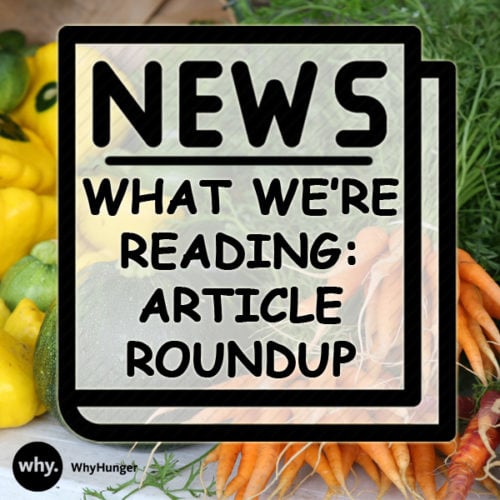 Below are our latest staff picks.

1. NY Times: The Tipping Equation
At restaurants across America, servers calculate how far is too far, weighing harassing behavior against the tips they need to make a living wage. It’s an issue that has plagued the service and restaurant industry for far too long.

2. Mother Jones: “The Water Stinks.” For Many Rural Americans the Only Choice Is Toxic
Water is a basic human right, but rural communities across America are experiencing a water crisis with high levels of contaminates being found in their drinking water.

3. The Atlantic:  Busting the Myth of ‘Welfare Makes People Lazy’
It’s a dominant narrative we hear often perpetuated by politicians and the media, which is that families and people on welfare (or SNAP) are “lazy.” But the data shows otherwise.

4. Yes! Magazine: 9 Ways You Can Use the Midterm Elections to Build Local Power
We can build long-term power in our communities and help elect our favorite candidates if we work strategically, inclusively—and independently.

5. Truth-Out: Florida Farmworkers Push for Fairness in the Fields
The Coalition of Immokalee Workers continues to fight for farmworkers’ rights in the field by boycotting Wendy’s and pushing them to join the Fair Food Program. The program creates a safer work environment and helps ensure workers are not exploited.

6. The Guardian: There’s Hope For Our Blue Planet, Despite What You See On the News
This article shares conservation success stories that show what ordinary people can do to improve our environment, from urban gardens that increase biodiveristy to communities resurrecting indigenous knowledge and more.

7. NY Times: When the Death of a Family Farm Leads to Suicide
Eye-opening article about how due to harsh market conditions and an economic crisis in the dairy industry in particular, dairy farmers are struggling to keep their farms and livelihoods afloat, with some turning to suicide.

8. The Atlantic: Can Planet Earth Feed 10 Billion People
A historical and scientific look at agricultural practices and moments that have greatly impacted our food system, and a discussion of what it might take to feed the 10 billion people estimated by 2050.

9. Civil Eats: What Children Understand About Food Insecurity
Researchers have begun asking children about their households’ lack of food and make surprising or maybe not so surprising discoveries. What we know for sure is that poverty and lack of food greatly affect kids’ mental and physical well-being.

10. The Nation: This Is the Most Dangerous Time in Decades to Be An American Living in Poverty
There has been an assault on a range of safety-net programs —from health care to housing to legal aid, making life even harder for people with low-incomes.