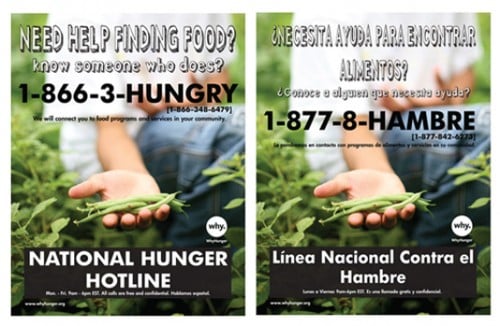 “National Hunger Hotline, how can I help you?”

“Are they going to cut my food stamps again?! I’m mentally and physically disabled and they already cut them back in November!”

I quickly realized that the man on the other end of the line had heard about SNAP cuts in the farm bill on the news, and that he wanted to know if he would be affected. I explained that Congress had voted to change the “Heat and Eat” provision, which allows people to qualify for additional SNAP dollars if they receive LIHEAP benefits, a state subsidy for home heating. He told me that he lives in New York and receives LIHEAP, but that his only income comes from his Social Security Disability check, and that he only gets the minimum amount. “I really depend on the food stamps; it’s all I have to feed myself,” he said.

Based on this info, I told him that it was unlikely that he would lose his benefits entirely, but that I couldn’t say for sure whether he’d be facing another cut. It is estimated that 300,000 households in New York State will see an average cut of $200 per month. Nationally, 850,000 families will lose an average of $90 per month in benefits.

The National Hunger Hotline 1-866-3 HUNGRY and 1-877-8 HAMBRE (1-866-348-6479 and 1-877-842-6273) refers people in need of emergency food assistance to food pantries, government programs, and model grassroots organizations that work to improve access to healthy, nutritious food, and build self-reliance. Help is available on Monday through Friday from 9am-6pm EST. Hablamos español. The Hotline is funded in part by the USDA Food and Nutrition Service.