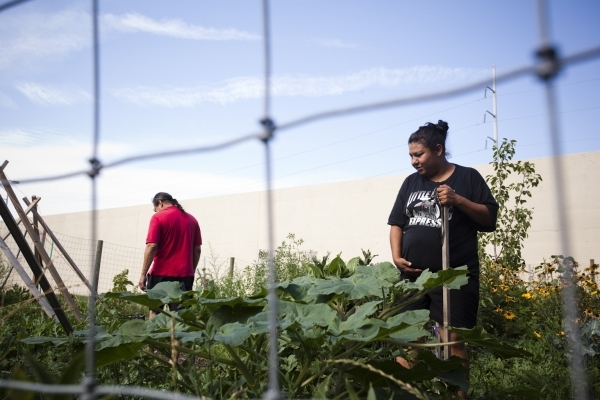 This spotlight is a feature of WhyHunger’s digital storytelling that showcases grassroots organizations and community leaders through dynamic stories and pictures, to give a real view of projects that are working to alleviate food insecurity and increase communities’ access to nutritious food. We believe that telling one’s story is not only an act of reclaiming in the face of the dominant food narrative of this country, but also an affirmation that the small acts of food sovereignty happening across the country add up to a powerful, vital collective. Up today: Youth Farm and Market Project; Minneapolis, MN. Story and photos by David Hanson.

“I’m the resource queen,” says Scelena, a large woman with a tattoo on her shoulder exposed beneath a tank-top and between the long braids of her hair. “They’ve got programs for kids out here. You just gotta find them.”

Out here is North Minneapolis, the city’s most drastic low-income zone with a mix of African-Americans, Latinos, whites, East Africans, and Hmong.

Next to Scelena sits Amphavanh, a southeast Asian immigrant who speaks fluent English. She lives in an apartment above a store in a really bad part of North Minneapolis. So bad, she says, that she can’t let her fourteen year-old daughter ride the bus to the grocery store. Another mother nods. She doesn’t let her young teen ride the bus, either. “And she’s bigger than I am,” the mom says.

These five women are seated at a table in a church basement on Emerson Ave in North Minneapolis. They’re here for dinner and dialogue. Their children work with the Youth Farm and Market Project’s (YFMP) new garden at Nellie Stone Johnson pre-K through 8th school, a YFMP expansion project that is a direct result of a CFP grant.The children have been cooking stir-fry chicken, rice with squash and zucchini from the garden, fresh fruit, and a peanut sauce. After the dinner is prepared, the participants split into three groups at three tables: children, teens, and adults. Each table has a leader from “Community Cooks,” a program of the community organization, Appetite for Change (AFC), begun by Michelle Horovitz. The leaders, Tasha, Princess, and Jesse, are residents of North Minneapolis. They come from the same place as the kids and mothers. AFC partnered with YFMP to conduct this dinner and dialogue in the fashion that AFC has been developing Community Cooks since it began with a pilot program in 2011.

So before everyone digs into the food that the children have been tending to all summer, everyone talks about food issues. The young kids are asked what they’d buy if they were given money and sent to the grocery store. These kids have been at Youth Farm and Market long enough to know that tomatoes, green beans, broccoli, onions, apples, oranges are the things they should be eating. Jesse writes their answers on a white poster sheet tacked to the wall.

At the adult table, Princess passes around a sheet of paper with an illustration of two meals (plus their price, and nutrient contents) to feed a family of four:

As the mothers look at the sheet, Princess continues, asking what the women do to find healthy, affordable food at grocery stores. Someone mentions dried mangos. Another mother wonders where you can get those. Someone says Wal-Mart sells them cheap. Another woman says you can dry them yourself for cheaper. One mother says she grew up in Brazil and they ate all their meat and veggies fresh. Her daughter is big, she says. Really big and she has asthma. She’s worried she might get diabetes. But they have a garden in the backyard and they work together in it. She makes it fun for them.

Amphavanah talks about living in an apartment above a storefront. She can’t grow anything. Years ago she had the chance to get a box for growing veggies, but she didn’t know how to, so she passed it up. Now she says when she can move into a house, her daughter Mela, can teach her how to grow produce like she learned at YFMP.