On Tuesday, October 15th, honorees from five countries  – and five continents – converged in New York City for the Food Sovereignty Prize ceremony. The Food Sovereignty Prize, presented by the US Food Sovereignty Alliance, was first awarded in 2009 to spotlight grassroots activists working for a more democratic food system and champion solutions coming from those most impacted by the injustices of the global food system. Blain Snipstal, a Maryland farmer, La Via Campesina youth leader and master of ceremony for the evening sees the Prize as “creating a space, a platform that truly honors one of the world’s largest social groups: peasant farmers.” Before the ceremony began, singer/songwriter Martha Redbone, said that “You always live in hope, that with this recognition, people will see the light.” Redbone and WhyHunger board member Jen Chapin provided special music throughout the event. 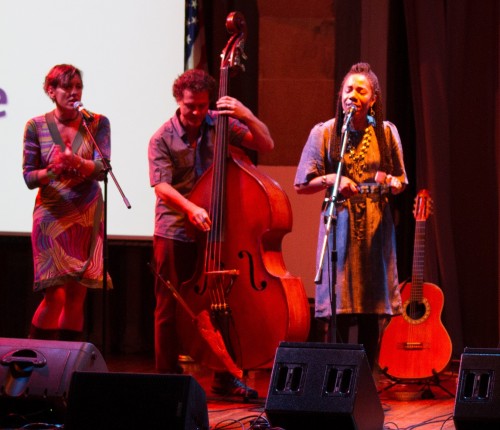 The Food Sovereignty Prize ceremony – held the day after Columbus Day, the day before World Food Day and two days before Monsanto and Syngenta executives are honored at the 2013 World Food Prize Laureate Award ceremony – is not just a recognition of 20 years of struggle for food sovereignty, but “500 years of resistance against colonialism,” Snipstal pointed out.

“I am so happy to be among movement people.” Shirley Sherrod, farmer-activist and former Georgia State Director of Rural Development for the USDA, delivered a keynote address that drew parallels between the grassroots movements for civil rights and for food sovereignty. “This movement is important to future generations…We need everyone; we all have to stand up.” 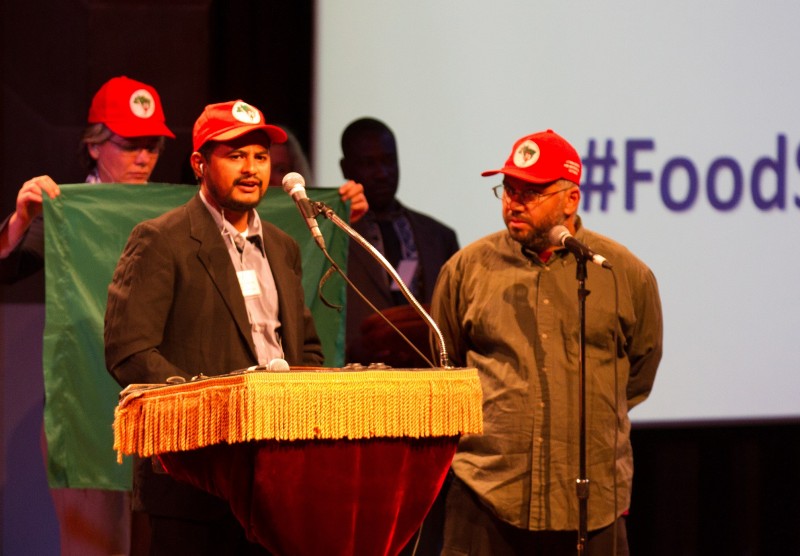 The first group to take the stage was the Group of 4/Dessalines Brigade, who won the 2013 Food Sovereignty Prize for their cooperation to save Creole seeds and support peasant agriculture in Haiti. The group made headlines when they set fire to hybrid seeds Monsanto donated after the 2010 earthquake. Flavio Barbosa of Brazil, representing the Group of 4/Dessalines Brigade, started by saying, “Haiti is a country that everyone talks about helping because it has a lot of needs, but in the 21st century, Haiti has been recolonized.” He described how the efforts of modern-day colonizers including the Haitian government, outside governments, NGOs and  biotech companies like Monsanto to “help” the Haitian people has resulted in monocropping, deforestation, the destruction of Haitian markets, hunger and poverty. “We know that this is not the way our country [Brazil] should be helping.”

Sheelu Francis from the Tamil Nadu Women’s Collective also spoke of her group’s work to organize women for food sovereignty in India, where the 1970s Green Revolution pushed farmers to grow varieties of rice and wheat that were reliant on expensive chemicals rather than traditional crops. A “second Green Revolution” pushing genetically modified crops now threatens India’s farmers; the women’s collective is fighting back by engaging 100,000 women in planting varieties of native millet, which is healthier and much more sustainable.

This year’s awardees are linked by “a common activist thread,” commented Alison Cohen, WhyHunger’s Senior Director of Programs. Being able to come together to dialogue with other awardees made it clear to Ibrahama Coulibaly from Mali’s National Coordination of Peasant Organizations (CNOP) that European countries are experiencing the many of the same difficulties as his home country. Helen Groome, representing the Basque Country Farmers’ Union (EHNE-Bizkaia), told the audience that more than half of the young adults in her country are unemployed while the government continues to cut state supports, which makes EHNE-Bizkaia’s programs to help young people return to farming that much more vital. Agricultural policy in Mali has also destroyed local markets and pushed young people to give up farming and move from rural areas to cities. CNOP’s mission is to strengthen the structure of farming organizations and build their members’ capacity to influence agricultural policy. Their efforts made Mali one of the first countries to put the principle of food sovereignty into law in 2006, though the government still promotes monocropping for biofuels and facilitates land grabs. Coulibaly offered a scathing critique of his government:

“When the head of the family can no longer feed the family, he will pack his things and leave in the middle of the night. And I wonder time and time again, why don’t we apply this to governments who can’t feed their countries?”