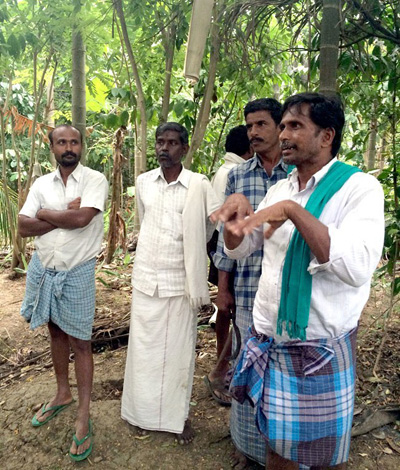 It is late-July. A car drops us off at the edge of a patchwork of agricultural fields on the outskirts of Mysore in a village called Bannur in the South Indian State of Karnataka. Despite the oppressive heat, the women clad in colorful saris, and the sacred cows—more plentiful than potholes—artfully dodged by cars and motorbikes every 20 yards or so along the road, I am reminded of the Midwest.

No matter that there is no corn or soybean in sight and that parcels measure 5 acres instead of 400. It’s the neatly defined fields in perfect rectangles that resemble what you see when you fly over Iowa. The field adjacent to the road where the car left us boasts a weed-free plantation of banana trees, the one next to it is lined with straight rows of sugar cane and the one just across the walking path that traverses the fields is recently sown with rice.

We walk a good half mile to the farm we’re meant to visit. Leading the way are seven men on motor bikes ranging in age from 30 to 60, wearing flip flops and fabric the size of table cloths wrapped around their waists in typical farmer garb, at least two of them are boasting bright green scarves thrown over their shoulders, symbolic of the social movement they’re connected to that promotes “natural farming.”

We’re headed to Krishnappa’s farm, a member of this green-scarf social movement referred to as KRRS, or the Karnataka Rayja Raitha Sangha. Founded in 1980, this peasant farmers’ movement is rooted in Gandhi’s philosophy of swadeshi, or home economy, meaning that political and economic power can only be just when it is governed by democratic assemblies organized at the village level. KRRS believes that by relying on a localized economy (local production and consumption) for village needs, everyone has the opportunity and the resources to work and create a dignified life.

As we approach the edge of Krishnappa’s 5-acre farm, the outward appearance is strikingly distinct from his neighbors’ parcels. It seems to be overgrown by weeds and unruly plants of varying heights defending their access to sun and water. The parcel looks like an island of chaos floating next to the neat rows of plantings all around us, waiting stoically and well-behaved on scorched earth for the rains to come. But nothing could be farther from the truth. Within minutes of stepping onto Krishnappa’s land, we become privy to an intricately designed coupling of various food-producing plants and intercroppings that bloom into a veritable food forest—the healthiest and most productive land we’ve seen in India during our short sojourn.

Krishnappa, the proverbial “poster child” of Zero-Budget Natural Farming (ZBNF), has been growing food according to this straightforward yet scientifically-based method for 15 years. KRRS credits Zero-Budget Natural Farming from saving Krishnappa from the fate of so many other farmers that were featured on the front page of the The India Times almost daily during the time we were in Karnataka. These farmers had tragically succumbed to suicide in the face of unrelenting debt. Farmers in India have been forced to take on high-interest rate loans to purchase seeds and chemical inputs from banks that are profiting from agribusinesses’ strategy of dictating the methods necessary to produce cash crops such as rice and sugar cane. Like the more than 3,000 farmers in India who have committed suicide in the past three years (50 suicides in 15 days in July of this year in the state of Karnataka alone) Krishnappa was feeling trapped and impotent, a victim to the whims of the loan sharks and unpredictable markets that either paid nothing or too little to make a dent in debt mounting season after season, let alone feed his family.

Want to learn more? Check out an upcoming KRRS training and watch their video to dig deeper. 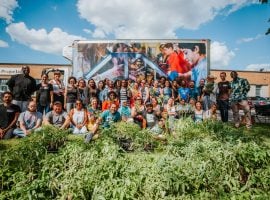