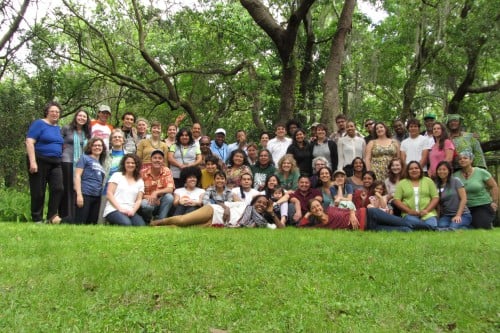 Last week, following the CIW’s March for Rights, Respect and Fair Food, the US Food Sovereignty Alliance held its second Assembly in nearby Tampa. The Alliance, of which WhyHunger is a founding member, works to end poverty, rebuild local food economies, and assert democratic control over the food system. In practice, that means building relationships and fostering solidarity among grassroots organizations and allies working for justice across the food system, including rural farmers, fishers, farm and food workers, urban growers, indigenous networks  and many others. The Assembly was held in Florida so that members could turn words into action and march in support of CIW.

After the march, about fifty food justice leaders spent two days in challenging and inspiring conversations about uprooting racism, the experiences that have shaped us, historical trauma, what it means to be an ally, how to support food sovereignty in our communities and the specific work we commit to do together in the coming year.

Wondering what food sovereignty looks like? Here are some of the people working to make it a reality around the country. For more, like the US Food Sovereignty Alliance on Facebook!