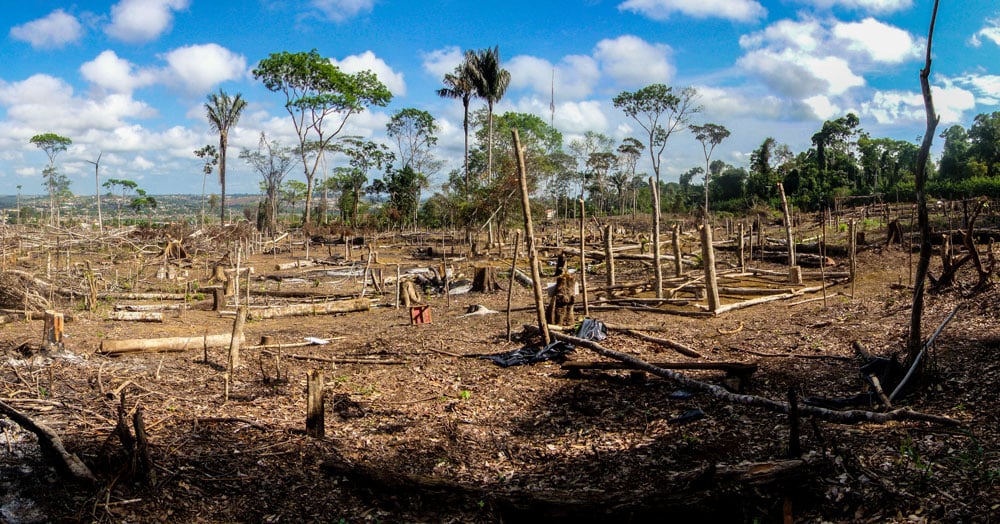 Analyzing the Complicity in Destruction II Report, How Northern Consumers and Financiers Enable Bolsonaro’s Assault on the Brazilian Amazon

Deforestation of the Amazon is one of the most critical and urgent issues in our struggle to stop global warming, mitigate climate change, and ensure a right to food and nutrition for all. Providing 20% of our oxygen, housing 10% of the planet’s biodiversity and helping to stabilize the global climate, the Amazon rainforest’s wellbeing needs to be a cause we all champion on a global scale.

Rising temperatures around the world are waking us all up to the effects of the harm humans have caused to our natural world, most notably the destruction of the Amazon. However, it is the indigenous populations that call the rainforest their home who are bearing witness firsthand to the damage it and their communities have sustained. And so, indigenous-led movements are taking action as they stand on the frontlines of the struggle to save and protect the Amazon.

Their fight has exponentially intensified in recent times, especially since the election of Brazil’s new president, the far-right politician Jair Bolsonaro. Under his regime, Brazil is “weathering the worst assault on human rights and environmental protections in a generation.”  Agencies like FUNAI (National Indian Foundation in Brazil) are seeing indigenous land authority being transferred away from them; and hundreds of land titling — land reform in which individuals and families are given formal property rights — have been frozen, with land grabbing by agribusinesses proliferating.  “Transferring this authority to the Agriculture Ministry, which is led by anti-indigenous hardliners,” also corresponds with a recent spike in violence against indigenous people.

The unprecedented escalation of deforestation in the Amazon has grave consequences not just for biodiversity and climate, but also for the food sovereignty and viability of the communities of indigenous populations who live within it. Receding access to the forest’s natural resources will deprive some 350 tribes — around 900,00 people — from having the space and freedom to harvest, cultivate and gather foods.  As their power and independence is compromised so will be their dignity and way of life, as they become increasingly dependent on exports and government subsidies in order to feed themselves.

The Amazon Watch report and accompanying webinar hosted by IFIP (International Funders for Indigenous People), “Complicity in Destruction II: How Northern Consumers and Financiers Enable Bolsonaro’s Assault on the Brazilian Amazon”, calls for international solidarity as a means to hold the Brazilian government accountable and create the change necessary to protect indigenous populations and begin to save the Amazon.

Since taking power, Bolsonaro’s government has taken initiative in cutting various measures meant to protect the Amazon and its indigenous lands and people. At the same time, the ruralistas — the powerful and conservative faction of agribusiness in Brazil with the largest bloc in Brazil’s Congress, also known as the Parliamentary Farming Front (FPA), are helping with the influence necessary to expedite the deforestation of the Amazon in the name of economic development. Under Bolsonaro’s ruling, deforestation has risen by 54%, with the ruralistasaiding him in shifting policies to facilitate the expansion of industry into protected areas. The Environmental Ministry (MMA) has been hit with severe cuts and has lost most of its autonomy, no longer having the jurisdiction to combat deforestation. And as of March 2019, there were at least 14 cases of illegal invasions across Brazil, a 150% increase since his presidency began. According to a recent article posted by the New York Times, the Amazon has lost more than 1,330 square miles of forest cover since Bolsonaro took office, a 39% increase since last year. The president has since denied these claims, calling them “lies” from his own government, and has fired the head of the government agency that revealed these alarming numbers.

The purpose of these calamitous measures is strongly influenced by efforts to rebuild Brazil’s economy and strengthen its international influence, including allowing corporations to invade protected land and loosening regulations to increase profits. The Environmental Ministry, along with its ruralistaallies, are proposing a law that would provide automatic approval for agribusiness projects and fast-tracking for major infrastructure development, while eliminating the need to consult with local populations that would be affected by these developments. This is in complete violation of international treaty ILO Convention 169 that declares Indigenous and Tribal Peoples’ rights to Free, Prior, Informed Consent (FPIC).

What this means is that Brazil’s economy will likely become increasingly dependent on foreign markets, both for its imports and exports. As the country becomes more entwined in the global economy, international actors — especially transnational corporations — will gain more influence in the exploitative activities of the Brazilian government. Typically, dismantling of environmental and indigenous rights protections favor a more aggressive extraction of resources. This could create a devastating reaction: the continuous destruction of ecosystems in the Amazon, in addition to the killing and forced displacement of local populations.

Indigenous organizations in Brazil, such as APIB (Association of Indigenous People of Brazil), are calling for international solidarity to make Bolsonaro’s administration accountable for its actions and to defend indigenous people’s sovereignty over their ancestral lands.  International solidarity would energize local populations to continue struggling for their territorial rights and put Bolsonaro’s administration on notice, as the world watches and responds. APIB has gained support from an impressive number of allies, including political, academic, and media leaders. By informing the public, both within Brazil’s borders and globally, these organizations are raising awareness about the urgency to safeguard indigenous rights, bolstering the struggle to protect the rainforest and the future of the planet that we all depend on.

Organizing by indigenous people in Brazil and around the globe is imperative in shifting the environmental crisis created by international agribusinesses and other extractive industries in Brazil. The APIB and other indigenous organizations – allied as the National Indigenous Mobilization – are pushing forward in the struggle for social and environmental justice. Their annual gathering “Terra Livre” (Free Land) this past April brought together over four thousand indigenous people in the capital, Brasilia. The month-long gathering and protest was met with opposition by the Bolsonaro administration, who allowed the Brazilian National Guard to be present in order to suppress the peaceful gathering of Native Brazilians. This event garnered great international media attention and APIB and its allies have used these spaces to show their organizing prowess around protecting the rights of indigenous peoples’ territories in the Amazon and elsewhere.

Companies operating in and exploiting the Brazilian Amazon — and whose capital originates in European countries, the United States and China – are responsible for the increasingly visible deforestation, corruption and slave labor.  They are not only operating with impunity in Brazil but in many other countries as well. By understanding and amplifying the message that the continuous harm to the Amazon and its populations are significantly influenced by international actors, including other nation-states and transnational corporations, we can in solidarity demand that our governments and our countries’ corporations stop these atrocities by discontinuing exploitative business practices that put profit before people. As stated in the report: “Foreign investors have enormous influence over what happens in the Brazilian Amazon. In particular, big banks and large investment companies play a critical role, providing billions of dollars in lending, underwriting and equity investments to soy and cattle companies. This capital and financial security enables agribusiness to maintain and expand operations, causing further devastation to the Amazon.”

The APIB is taking this message on the road. They are organizing a tour this fall to ten European cities to meet with influencers and decision makers on the dangers of continuing to do business with Bolsonaro’s administration and the companies that exploit, often times illegally, the Amazon rainforest.  They aim to build solidarity with movements, consumers, civil society and policymakers who will join with a collective voice demanding that the Brazilian government and their own governments codify equitable, responsible and sustainable regulations, putting a halt to the current power of agribusinesses.

This report exposes the risks behind doing business with companies directly tied to illegal deforestation under the brutality of Bolsonaro’s Brazil. Europe and United States-based companies and financiers identified here have now been made aware of their enabling relationship to the polemic and immoral behavior of actors within their supply chains and portfolios, and should swiftly act upon this information to minimize exposure to this risk.

To learn more about this alarming issue, the international companies currently exploiting the Amazon, and the solutions indigenous-led social movements offer to drastically change the narrative and course of the future of the Amazon, please check out this report here.

Join WhyHunger as we build solidarity with indigenous peoples in Brazil and around the world fighting for climate justice, the right to a dignified life, a world with abundant natural resources that will feed and nourish us all, an end to agribusiness and exploitative business practices that put profit before people and the planet.