Globally, women and young girls suffer most from hunger and poverty. Conservative estimates indicate that 60% of all chronically hungry people are female. This is further exacerbated by conflict, forced migration, unemployment, low-wage jobs, and food and water insecurity caused by extreme weather and climate events.

While women are more likely to experience hunger, they are also most responsible for moving food from earth to table and sustaining the health and well-being of their families. Around the world, women produce an estimated 70% of all food consumed in their countries. They are the keepers of local seeds and vital knowledge about sustainable practices that produce abundant food, repair the soil and cool the planet. In many ways, it is women who are on the frontlines of the ongoing struggle for food, land, water, and economic justice. 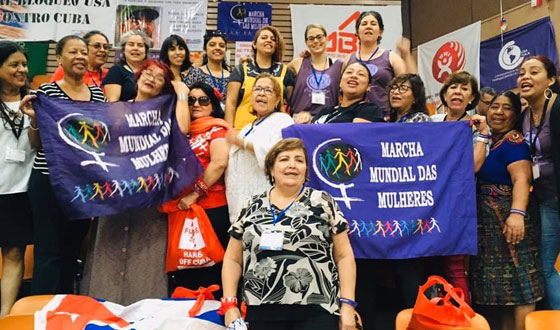 The World March of Women is a global women’s movement and a critical social and political force in the struggle for food sovereignty, economic justice, demilitarization, and an end to all forms of violence against women. Represented in 66 countries, the World March of Women is a powerful driver of local and global efforts to liberate women from hunger, poverty, and discrimination and to equip them to lead healthy, thriving communities.

Members of the World March of Women have proven vital in developing innovative solutions that nourish families, power local economies, and transform communities from a feminist perspective. From training thousands in sustainable farming, nourishing the leadership of women and girls, winning Supreme Court cases to protect their livelihoods, and ensuring equal rights for women in their nations’ constitutions, the World March of Women shows that organizing, training and empowering women nationally and globally is fundamental to addressing the root causes of hunger and poverty.

To learn more about the World March of Women and the incredible work they do, click here.