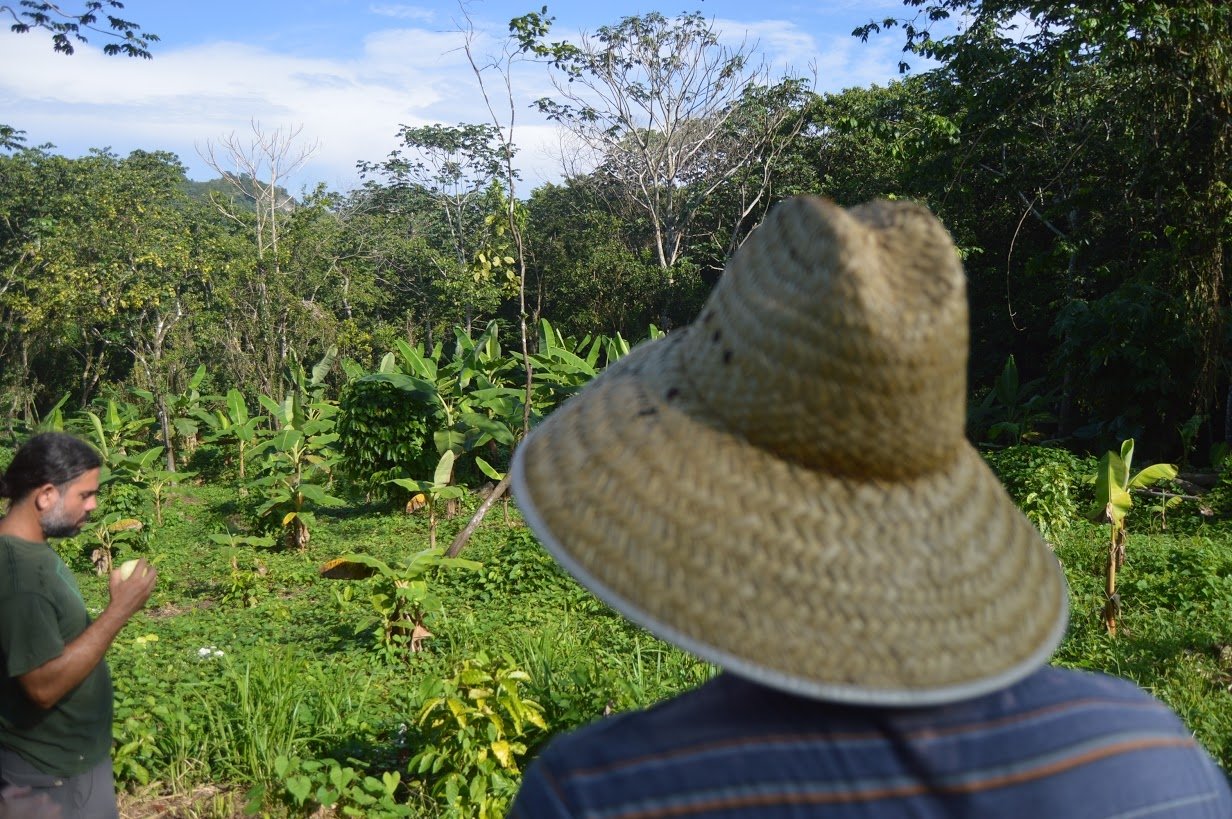 This is the first article of the series “People’s Agroecology,” written by Blain Snipstal, a returning generation farmer part of the Black Dirt Farm Collective in Maryland. As part of the continuation of the 2015 Campesino a Campesino Agroecology Encounter led by farmworkers in the US, Blain visited four leading organizations in the US and Puerto Rico in this effort to learn more about challenges and current practices to advance their goals through Agroecology.

The place of Agroecology

As people in struggle, our causes, and our organized efforts do not exist in a vacuum. They are efforts that, taken into the historic contexts in which they appear, are created by and/or in response to the conditions of their time. It is within this vein that the articulation of agroecology in the US should be located, and as part of the 500 year (plus) process of struggle and resistance.

It is also critically important to situate agroecology as a tool for social struggle – that is, to use it to fundamentally change the relations of power in the food system and as way for healing of our Mother Earth, at local and national levels. It is not just a mere form of “Sustainable Agriculture”. To be clear, it is not about situating one word against another like permaculture versus agroecology, or sustainable agriculture versus biodynamic – to do so would limit the narrative to its ecological boundaries. It is about a series of ecological principles and values, the revalorization of local/traditional/indigenous knowledge, bringing dignity and vibrant livelihoods back to rural life and food systems labor, and a clear alternative to the industrial model of agriculture. Agroecology is a political and social methodology and process, as much as it is an ecological alternative to Agribusiness. This clarity is especially important given the current efforts by NGO’s, community based organizations and social movement organizations that are raising the banner of agroecology in the United States.

Why Agroecology? Who is advancing and using agroecology in the US? Why situate political training and leadership development while developing agroecological systems? These are some of the questions to explore and discuss throughout this series.

Starting from the bottom

The industrial food system as we know it today is the child of the plantation system of agriculture. They are both built upon exploited labor, dispossession and exploitation of land from indigenous peoples, the destruction of rural culture and land, consolidation of power and land in the ruling classes, and the forced migration of peoples. The plantation system was the first major system used by the colonial forces in their violent transformation of the Earth into land, people into property, and nature into a commodity – all to be sold on the “fair” market. This transformation was long, crafted and violent, and supported by the state. Land was stolen from the Indigenous and people were stolen from Africa. Race and White Supremacy were then created to give the cultural and psychological basis to support the rationale, organization and logic of capital. The church was implicated in deepening the rationale of slavery. Violence against women and gender-based violence further drove the normalization of servitude home. This was all woven into the fabric of the plantation system of agriculture in the South, during its development from the 16th to the 19th centuries.

Indentured Irish were the first toilers, then enslaved Africans for over 250 years. During the expansion out west, the Western Indigenous groups were violently used in the creation of the wine and food production systems. Back in the South, there was steady flow of poor black and white labor used throughout the food system up until WWII, when the Bracero Program was implemented throughout the United States that brought Mexican farmers and peoples into the U.S. as Farmworkers. But the Bracero program was “formalized” after an already over half-century of farm work provided by Mexicans. The late 19th and early 20th centuries saw farm labor represented by Chinese, Japanese, and Filipino peoples (National Farm Worker Ministry). After WWII, as US capital interest and colonial forces spread out around the world, spreading the gift of democracy and “freedom”, you then find those places of “interest” represented in the labor of the food system – Mexicans (and Central American folk in general), Jamaicans, Haitians, Indians, Hmong, and the list goes on. It was like a revolving door of sorts – and it is still the case today. The two critical pieces within the development of the industrial food system have been – and will continue to be – land and labor. And within the context of land and labor within US agrarian history we can say that, the particular dispossession and colonization of indigenous peoples’ land and then the subsequent dispossession of Black-owned land in the 20th century, consistent discrimination and violence towards people of color and migrants in the food system, the dwindling population of small-to-medium scale farms, and the historically persistent exploitative use of people of color as farmworkers is important to name.

So why does any of this matter when talking about Agroecology in the United States?

Agroecology, and those that use it as a banner of struggle, must find its place in stark contrast to this violent narrative of the capitalist industrial model of agriculture and its development in the US. Having an historical analysis about how this model of agriculture and its food system came to be, is critical. This inquiry allows us to understand that the critical and historic nature of farmworkers, black and brown farmers, indigenous peoples and food system workers must be at the center of the movement for agroecology and food sovereignty in the United States.

This is not to say those who are not represented by either of those aforementioned groups do not have an interest at stake in the movement towards food sovereignty through agroecology – quite the contrary. It is to say; however, that given the unequal distribution of power in the food system (towards corporations) and how institutionalized racism, colonialism and oppression have built the food system (and society) as it is, these historically marginalized groups should be supported as they take leadership in guiding society in a different direction, and in particular when it comes to agriculture and food.

This narrative of “Towards a Peoples’ Agroecology” is an initiative aimed at uplifting and amplifying those who are at the center of various forms of transformation within the food system, and are using the banners of agroecology and food sovereignty to carry their visions forward in a variety of ways. The project is not final nor is it a comprehensive tale, but a small glimpse into organizing efforts and visions from some of the groups that feel the greatest historical weight of the food system.

This project is one of the fruits coming out of a multi-year process involving various farmworker, African-American and Latino farming organizations across the US and in Puerto Rico. Some of the groups are members of La Via Campesina and others are close allies and partners. From February 16 – 20 of 2015, several of these groups participated in the 1st Campesino-a-Campesino Agroecology Encounter, in Fellsmere and Florida City, Florida. The encounter was co-organized by the Farmworkers Association of Florida (FWAF) and the Rural Coalition (RC) – both members of La Via Campesina North America. 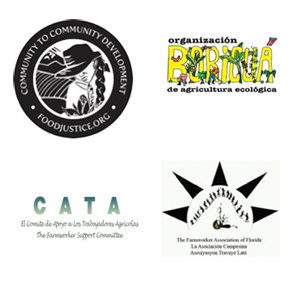 As a result of this encounter, several of the groups decided to continue the learning process and deepen their political and social understanding of agroecology through a series of tele-conference meetings/discussion, study materials and presentations from key persons within peasant movements advancing agroecology and political education in Latin America. This process was called Formacion en Agroecologia, which in English means “Formation in Agroecology”. The groups in this process, which will be highlighted in this series are – The Farmworkers Association of Florida, Community-2-Community, Farmworker Support Committee (CATA), and Boricua – La Organizacion de Agriculture Ecologica de Puerto Rico.

This series will highlight some of the perspectives, visions and agroecological practices and processes of formation (training) within Farmworker communities and amongst farmers of color within the US and Puerto Rico.

As stated by La Via Campesina in their recent publication PEASANT AGROECOLOGY FOR FOOD SOVEREIGNTY AND MOTHER EARTH, “We believe that the origin of agroecology lies in the accumulated knowledge and knowhow of rural peoples, systematized by a dialogue between different types of knowledge (“diálogo de saberes”) in order to produce the “science”, the movement and the practice of agroecology” (La Via Campesina). OUR Hope, is that the visions, actions and perspectives amplified through this project will bring yet another critical perspective and voice to the current debate on agroecology, food sovereignty and our food system that is unfolding around the country. And that, these will add to the “dialogo de saberes” that is necessary in the US to truly and honestly confront the root causes of injustice, poverty, hunger and oppression in this society and the food system (Martinez and Rosset).

Want more? Read the next article in this series

This media project is funded and supported by WhyHunger. Amongst other supporters, WhyHunger also supported and participated in the Agroecology Encounter in Florida, 2015.