Two summers ago, I found myself sweating in northern Ghana’s hot sun, following a t-shirt-clad doctor around his clinic’s grounds. Dr. David Abdulai spoke with the strength and humility of a Zen teacher and had an unusual approach to healthcare: in addition to medicine, he treats his patients with unconditional acceptance. A year later, I returned to Shekhinah Clinic to film a documentary about their food program, which delivers daily meals to over 150 of the city’s mentally ill homeless population. Under the Mango Tree is a forthcoming film about how food repaired the relationship between the mentally ill homeless population and the citizens of Tamale, Ghana.

According to Human Rights Watch, there is one psychiatrist for every 2 million people in Ghana. Psychiatric hospitals often lack the resources to provide adequate food and medicine and face challenges with overcrowding. The widespread belief that mental illness is caused by evil spirits, demons, or witchcraft has led to the development of spiritual healing centers called “prayer camps,” where, according to a UN report, people with mental disabilities are chained to trees and denied food and water for days at a time. The same UN report expresses disappointment with the newly formed Mental Health Authority, which has not yet begun monitoring mental health facilities as required by Ghana’s 2012 Mental Health Act. Shekhinah Clinic is one of the few healthcare facilities that welcomes those suffering from mental illness without judgment, mistreatment, or force, and it has what may be the only meals-on-wheels-style program in Tamale, making it a vital source of emergency food.

As a graduate student studying Food Systems at New York University, I was in Ghana taking a class on the root causes of global hunger and food security. After five weeks traveling the country gathering stories and data, I came home gushing about Dr. Abdulai and his incredible work. His personal story is itself inspiring — growing up in Tamale, Ghana, he lost both parents and all ten siblings to poverty-related diseases before he reached age of 10. With fierce determination, he managed to complete medical school. He quit his job in public health to open Shekhinah Clinic, performing the first surgery on location under a mango tree that now shades a cluster of residential wards, a laboratory, and a surgery theater. He offers free healthcare to anyone who needs it, no questions asked. 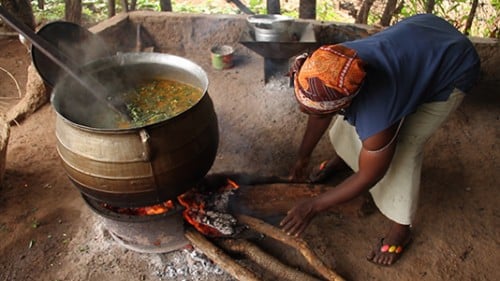 Abu, a volunteer at the Shekhinah Clinic food program, stokes the flames under groundnut soup.

The food program began 20 years ago in response to complaints from market stall owners that the mentally ill homeless were stealing food, harassing the women, and causing public disturbances. After growing up on the streets himself, Dr. Abdulai understood that these behaviors were often caused by hunger. He and his wife decided to deliver meals directly to the mentally ill living in the streets, and found that once they were fed, they were calmer, caused fewer disturbances, and stopped stealing food in the markets. The program is still going strong today, delivering one nutritionally balanced hot meal per day, seven days a week. The food program maintains a small farm with chickens, fruit trees, and vegetable plants, which are used in the program’s meals. Other programs at Shekhinah provide microloans for women to run small businesses and shops in the Tamale area, helping to alleviate local poverty.

The clinic has limited access to resources, relying on donations from inspired visitors. And with the decline of the global economy , those donations have decreased . Inspired by the doctor’s selfless humility and incredible story, I decided to bring this story to the screen to raise awareness of the clinic’s critical work and the power of their food program. The goal of Under the Mango Tree is to create a lasting piece of media that can be used by multiple parties – the clinic, nonprofits, student activists, etc. – to tell the story of the clinic and inspire viewers to donate. To learn more of Dr. Abdulai and the food program, watch the trailer and get involved here.