This is a guest post from Dan Susman, Director/Producer of the documentary film Growing Cities. Many of WhyHunger’s partners, including Karen Washington, Malik Yakini, Growing Home, and Added Value, are featured in the film.

We’ve all heard about the problems in agriculture, from GMOs and CAFOs to aging farmers and dead zones in Gulf of Mexico. But, what all these acronyms and statistics don’t add up to is change. So, close to four years ago, my childhood friend, Andrew Monbouquette, and I figured it was time to highlight positive stories of people transforming the food system, right in their own backyards. And this is what our new documentary film, Growing Cities, is all about.

From Detroit to New Orleans, the film follows us as we visit folks who are challenging the way this country grows its food one vacant city lot and backyard chicken coop at a time. We’ve found urban agriculture has remarkable power on many levels—it connects people to their food, strengthens communities, revitalizes blighted areas; and much more.

In many ways it appears that urban agriculture is our generation’s back to the land movement, but with a crucial difference—today’s new farmers are not running away from society’s problems but tackling them head on. They are helping solve issues of hunger, food justice, and giving hope to many communities where there was little previously.

You can help Dan and Growing Cities spread good food stories to millions on PBS by supporting their Kickstarter.

And sure, while many young people continue to flock to urban centers like New York and San Francisco, more and more are putting down roots in their less assuming hometowns. For instance, in Omaha, NE, where I’m from, a collective of young people came together to form Big Muddy Urban Farm, which has a 25 member CSA and grows on vacant lots throughout the city. In the heart of industrial farming country, these young people are a wonderful example for residents, many of whom don’t know a CSA from a GMO – which, let’s be honest, is probably true for a majority of Americans.

I’m not saying urban farming will fix every problem that our communities face. It won’t. However, I do think these farms are an integral part of changing the food system, even the front lines, when you consider close to 80% of our population is considered urban. As Eugene Cook, a farmer in Atlanta, says in the film, ‘Grow Something, Grow Where you Are.’

You can help Growing Cities spread these inspiring farmers’ stories to millions on PBS! Learn more and donate on their Kickstarter page: //kck.st/1kTnQdg. 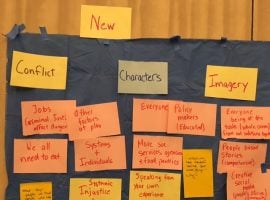