“While it may not be the direct responsibility of a large chain to get involved with a supplier’s labor disputers with their employees, there is some moral responsibility. A company like Publix which prides itself on making the Forbes “Best Places to Work” list, should be willing to leverage its enormous purchasing power to make life easier for the people who pick the fruits and vegetables that land on their shelves…..and our table.” 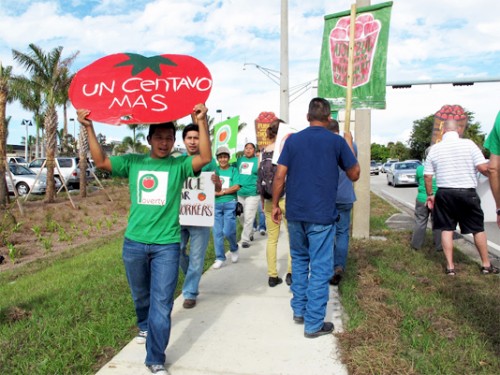 On Sunday, March 3rd in Florida, hundreds of men, women, and children will begin marching almost 200 miles from Immokalee – the center of the US tomato industry and home to its farmworkers earning poverty wages—to Lakeland—the headquarters of Publix, the largest supermarket chain in Florida and a big buyer of those Florida tomatoes. The marchers are farmworkers, their children, and the supporters and allies of the Coalition of Immokalee Workers (CIW). They are walking for 2 weeks because they want better wages and conditions: protections against sexual assault and physical abuse in the field, stolen wages, and even outright forced labor. WhyHunger will be marching along with CIW, as friends and allies, in order to ensure that the people who harvest the food for our tables also can put food on their own.

The CIW is based in Immokalee, Florida, which has been called “ground zero for modern day slavery”. They were founded in 1993 by Latino, Mayan Indian, and Haitian immigrant farmworkers who refused the indignity of working long and hard hours, earning poverty wages, and being denied basic human rights. Need a sick day? Forget about it! Farmworkers are often denied a water break during a day in the fields. So, farmworkers can’t just ask for a raise – they have to march for one.

In 2003, the CIW decided to target the biggest fast food chains who were benefiting from the cheap tomato prices due to the slavery conditions in Florida’s tomato fields. They organized for years with faith leaders and students to pressure Taco Bell, McDonald’s, Burger King, Whole Foods, Trader Joe’s, and Chipotle (among others) to pay farmworkers a raise and ensure that farmworkers get basic labor protections in the fields. And they won every campaign! Tens of thousands of workers have benefited from their efforts to reform farmwork.

A year ago they asked Publix, as the largest supermarket in the state, to also give farmworkers a raise of 1 penny per pound of tomatoes – about $1/hour, or a 40% raise. But for over a year, Publix has said N-O. So, over a decade after the CIW first marched across Florida for basic human rights and dignity, CIW is once again marching through Florida to send a message to Publix and their customers that they owe farmworkers a raise.

I used to think that if farmworkers earned more money, then food would cost more, and then more people would go hungry. But in reality, if a farmworker gets a 40 percent raise, a typical family would only spend $15 more on foodin a year. Meanwhile, farmworkers are the people most affected by hunger in the country, and a 40 percent wage could lead to over $4000 more income for a year – that still isn’t a living wage, but it can get a farmworker out of poverty.

When we ask “why is there hunger in a world of plenty,” we know the answer – poverty. When we ask “why is their poverty in a world with so much wealth,” we know the answer – powerlessness. When we see an organization like CIW, who has taken the power back to bring basic human decency like freedom from sexual abuse and a right to one’s wages and involve the biggest food companies in the US in the struggle for justice, WhyHunger has to support them.

WhyHunger’s delegation will be joined by thousands of other supporters from all over the country, including farmers and farmworkers from the Farm Labor Reality Tour, which is traveling all the way from Maine, to Wisconsin, and then down to Florida. WhyHunger has also been following the Farm Labor Reality Tour. Check out our blog posts from the Tour, and stay tuned for our reports, photos, and videos from Florida.