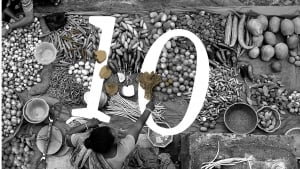 This is a repost from the original article found here. As a proud member of the Global Network on the Right to Food and Nutrition we’re happy to share this latest publication that examines the challenges and opportunities of the continuing world food crisis.

The Food and Agriculture Organization of the United Nations (UN FAO), launched its tenth anniversary edition of the Right to Food and Nutrition Watch that looks back at the last decade, when the world food crisis brought the number of hungry to a peak. Today, despite some progress, many of the problems that led to the crisis in the first place persist and continue to affect millions.

“The 2007/2008 crisis that pushed the number of people living in hunger to one billion and compromised the human rights of many more, never really went away, the 2017 Right to Food and Nutrition Watch warns.”

This is confirmed by this year’s report ‘The State of Food Security and Nutrition’ (SOFI) announcing that, after steadily declining for over a decade, global hunger is on the rise again, affecting 815 million people in 2016 – 11% of the global population. Although these figures do not represent the full picture of food insecurity, they give a hint of the path the world is heading towards. The proliferation of violent conflicts, like in Yemen, and climate-related shocks, which can be best exemplified by recent catastrophes in the Caribbean and Americas, are partly behind such trends. But underlining all this is the dominant economic system.
Entitled “World Food Crisis: The Way Out”, this issue of the Watch illustrates the ongoing multifold crisis that the world is still trapped in with ten articles and ten key images. From climate change to unfair global trade rules through the agribusiness megamergers, the role of women in transforming food systems and the right to food in emergency situations, the Watch sheds light on the intricacies behind the crisis.

When disaster comes as no surprise
The Watch echoes that the crisis, which was rather multifaceted and multidimensional, “had profound effects on people’s lives and livelihoods, on their relationships to food, as well as on public health and on the social fabric of communities – effects that are still being felt to this day”. The crisis was indeed the result of a convergence of complex long- and short-term factors, as the authors explore. But for many, especially in the food sovereignty movement, it came as no surprise, as it was the inevitable outcome of dominant economic and political systems that prioritize profit over the maintenance of our environment and our human rights.

The Watch highlights that there is a homogenizing and hegemonic global food system, which is driven by increasingly concentrated transnational corporations and reduces food to a tradable commodity. The rural space is the primary area where this conflict materializes, often violently, while in urban contexts the alarming incidence and prevalence of diet-related non-communicable diseases is on the rise worldwide. “This unsustainability had been evident in the systematic exploitation of farm labor, the persistent pollution of natural resources, the concentration of economic power and wealth that left food producers chronically indebted, and the rising levels of inequality in access to both food and productive resources,” it reads.

For a way out, shake the system
In its recommendations to overcome crisis, the publication points to the need for systemic transformations, for a transition to sustainable production, distribution and consumption models, based on solidarity, social, environmental and gender justice, and the guarantee of all human rights. “To have the wherewithal to feed humanity into the future, we urgently need to build up resilient local and regional food systems and address the extreme concentrations of power in national and international markets,” it concludes.
Commenting on the publication, Soledad García Muñoz, first Special Rapporteur on Economic, Social, Cultural, and Environmental Rights of the Inter-American Commission on Human Rights (IACHR), states:

“To understand the crisis, it is necessary to carry an honest and introspective analysis of the dominant food system, as well as the socio-political apparatus that sustains it. To overcome it, we need to achieve a better distribution of power and wealth, and believe that change itself is possible. This needs to come along with the reinforcement of human rights and all the mechanisms that promote them in good faith. After all, as the Watch points out, these are the result of our struggles for social justice and will be the cornerstone for the future generations.”