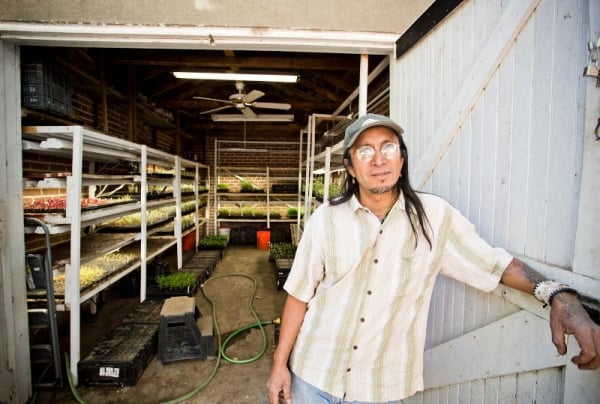 Fidel Gonzalez started farming to save his house. He’d never farmed in his life. He’d never been to a farmer’s market. But he was running up against a wall with payments and his music recording business wasn’t giving him the boost he needed. Fidel had worked in music most of his life. At age 22 he moved into the US at night, across the Texas border, then up to Las Vegas, and on to New York where he had some friends. They planned to travel to India and explore meditation.

Don Bustos has been farming since, as he says, “I was knee high to a grasshopper.” He used to follow his grandfather and their mule through the fields of their family farm in Santa Cruz, NM. He learned the rituals and songs and prayers sung over seeds and soil and water in the indigenous way, by watching and listening and eventually participating with the elders. He grew into a farmer like his ancestors.

In New York, the India plans fizzled. Instead, Fidel got picked up by a traveling band, “Native Spirit.” They played Andean music all over the country. At one point they got a job in Albuquerque that turned into six months of ongoing gigs. Fidel fell in love with the southwest. That was fifteen years ago. Five years later, Fidel moved to Albuquerque after a stint in Phoenix, still traveling with the band but looking for something more than New York City, after all those years, had to offer.

In Albuquerque, Fidel rented a simple, old brick home on Riverside Dr. Across the quiet street an alley of cottonwoods lines the oasis of the Rio Grande River. Like many musicians, Fidel grew tired of the road. He wanted to be in one place and he’d found that place in the house beside the Rio Grande. He built a recording studio inside and tried to make a living recording music rather than relying on road tours to perform. After a year and a half things were looking grim financially. The recording studio brought in some business, but not enough. He was making some documentaries and videos with a buddy named Pablo Lopez, but there’s not a lot of money in that work, either. 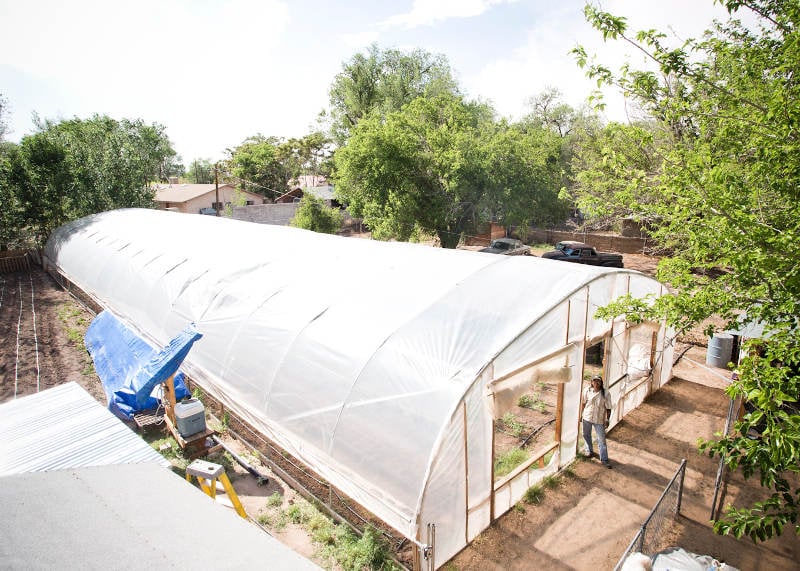 For Don Bustos, it was not enough to just farm his family land. He saw the food system shifting away from traditional foods and he saw a lack of farmers, the agricultural exodus that swept across the country for much of Don’s generation. He committed to the idea that spreading traditional agricultural knowledge is the most important seed to share. As Don’s grassroots agricultural education took shape, he began training backyard gardeners in Albuquerque’s South Valley, a historically agricultural community sitting atop rich Rio Grande floodplain soils. He began working with, among many others, a man named Pablo Lopez, teaching him natural, organic, traditional growing techniques.

Don joined a non-profit agriculture education group called American Friends Service Committee (AFSC). They won a three-year USDA Community Food Project (CFP) grant in 2009. The grant’s mission was to begin to fill the gap between agricultural producers and the needs within the large-scale, institutional market of Albuquerque. Food security played an obvious role in the program, but there was another long-term vision involved: protecting the historic rights to water for all agricultural users in New Mexico.

Sounds lofty. How do you do that with grassroots backyard growers?


In the 1600s Spanish settlers in New Mexico established what is considered the first form of democracy in what is now the United States. It revolved around the most essential and scarce element in New Mexico, water. The mountains around Taos and north into present-day Colorado create and collect much of the water that falls in the arid region. The rain comes heavily at times and scarce for much of the rest of the year. The Spaniards and Native Americans built irrigation channels throughout the landscape to spread the water to the various farms and communities. They established democratic governance over that water so that it could be used responsibly during times of plenty or sparingly during drought. Acequia members had to participate in the process, meeting to discuss the needs and agree on strategies to share the liquid wealth among all the users. It’s hands-down the most effective, most flexible water policy in place in America. And it still exists today.

Problem is, too many people. Albuquerque is expanding beyond its water supply. Acequia members still operate democratically, but pressure is rising to pull rights from agricultural users and divert it to use by the growing municipalities.

Bustos and his crew want to strengthen the voice of the food producers. That’s where Fidel comes in.

Fidel’s finances weren’t coming together with the music recording and the documentary videos. He told Pablo he wanted a part-time job. He didn’t want to lose his house. Pablo had started a non-profit called Emerging Communities (EMC) for his work with the backyard gardeners. Bustos and AFSC had connected with EMC following the CFP grant.

Meanwhile, Bustos and his AFSC organization received a CFP grant to begin a network of local growers. They partnered with three non-profits in the Albuquerque area: Valle Encantado is a group focused on creating green jobs for residents in South Valley. La Plazita is a farming organization with a mission to use farming and the spirituality of the land to heal troubled youth. And there was EMC, Pablo’s program to teach and support backyard gardeners. 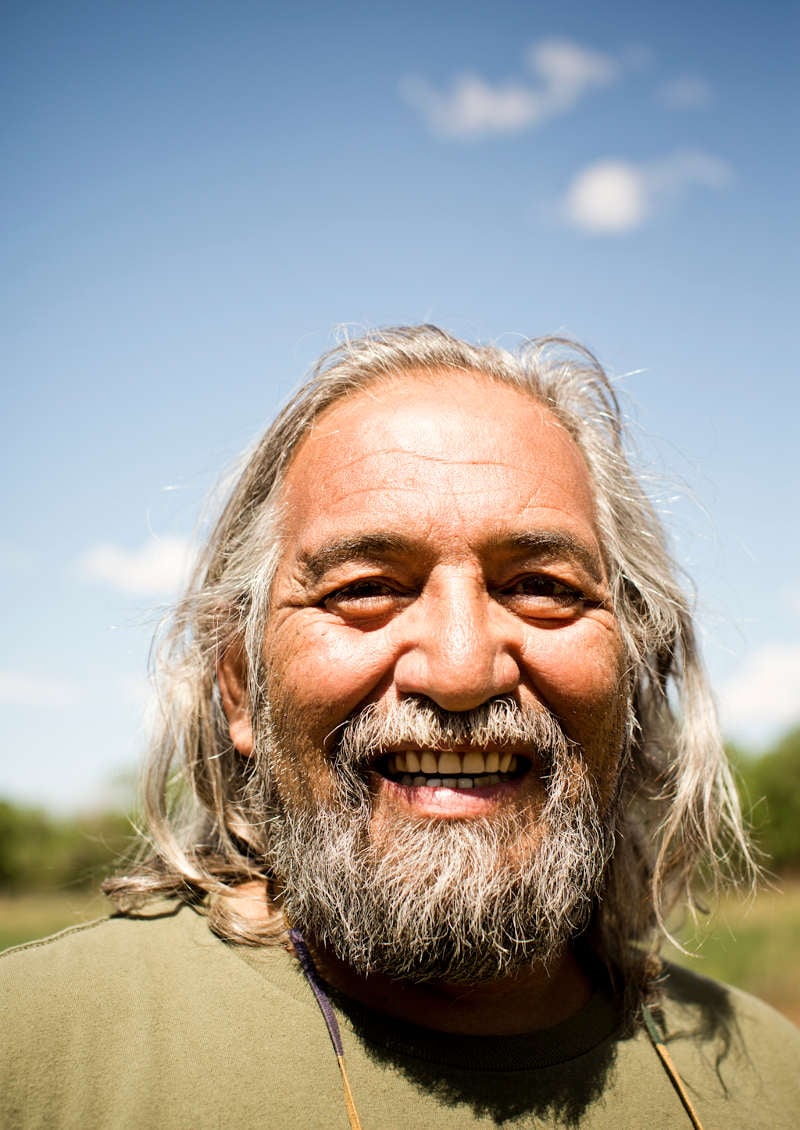 Bustos and crew would oversee the collaboration of the three groups as they trained residents selected from their own ranks to become farm entrepreneurs. Pablo thought of Fidel. He had no farming experience, but the year of training with the other participants and under the guidance of Bustos and AFSC would provide that. Pablo knew Fidel was hungry for work and he knew Fidel had that intangible business know-how of many long-time freelance artists.

Fidel signed on. Why not dig up his backyard? It was just old river flood soils, rich in nutrients. Up until then he just used the yard to play frisbee with his three labrador retrievers. And the training position paid $650 per month for the first incubator year, enough to save Fidel’s house.

He and the other nine trainees from La Plazita and Valle Encantado spent that first year training together, growing close as a unit, a sort of brotherhood of community growers. The shared training not only built their friendships, it accomplished the fundamental step in Bustos’ plan. It began the process of aggregation of the farming resources. After a year, when Fidel and the others began pulling food from their lands, they could work together, bringing enough volume to market to reach the Albuquerque Public Schools, which whom AFSC had formed a contract.

Fidel’s first sale was seventy-two pounds of lettuce to the APS. In winter. He was amazed. With the cold houses he and the other growers could fill a handful of orders set up through AFSC: the schools, plus seven restaurants, two hotels, three grocers. Individually, Fidel began selling to farmers markets. His creativity moved in, as it tends to do as an artist becomes comfortable with a new craft. He planted yellow taxi tomatoes instead of regular reds. His were the first yellows to sell at the downtown farmer’s market, and they sold out in two hours on the first day. He went through all ninety tomato plants that first year, then planted 180 the next year, then 1000 the third year, and this year he’s planning to plant 1500.

Fidel is a farmer now. He’s adopted the lifestyle. The training program stipend expired after the first year so he was on his own, using the skills and marketing and network shared with him by AFSC, EMC, La Plazita, and Valle Encantado. The group even began their own collaborative association, Agri-Cultura Network (ACN). Collectively, they wield more bargaining power within the marketplace and they run the show, having moved out from under the wing of AFSC.

“I used to stress about the music and the recording,” he says. “I had to push so hard and it was like a burden. Now I have fun with the music again. Also, I have a family now. My wife and I have a nine month old. I needed to support a family and the farm is doing it.” 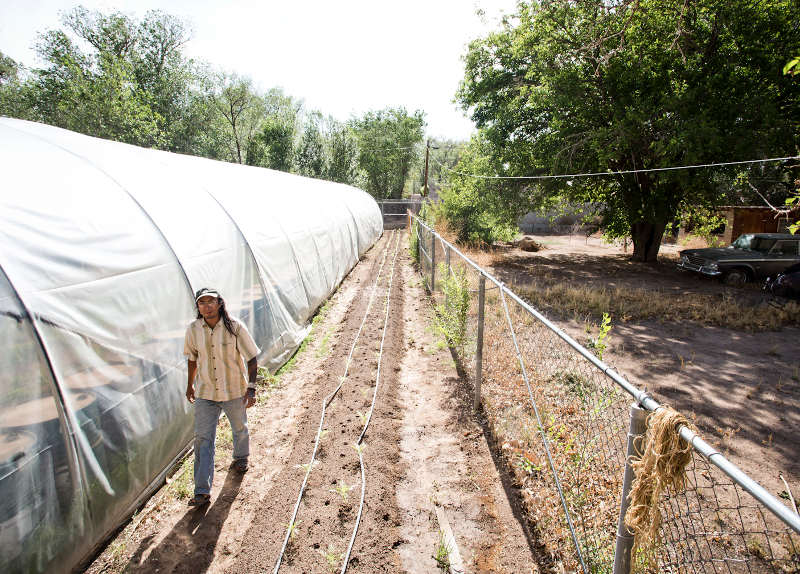 Fidel is also a businessman. He’s scaling up. Half of his garage is now a nursery for his starts. He’s about to crank up a new refrigerated storage shed (plywood, tin roof, insulated walls, and an AC unit with a simple electrical short that tricks the unit into cooling at near-freezing levels).

Two houses down, seen from the rooftop of his garage, Fidel’s neighbor and friend agreed to let him farm his backyard, too. A cold house stands out against the green foliage of cottonwood trees and the silver grids of chain-link fences. Fidel and the neighbor signed a Memorandum of Understanding that formalized simple terms: the homeowner receives some of the produce and Fidel is guaranteed access to the farm for at least a few years, at which time the MOU can be renegotiated. Fidel has five more plots, which allows him to grow 1500 tomatoes in summer and hundreds of pounds of greens for the city schools in the winter season.

Bordering the cold house on both sides Fidel has planted marigolds, the ceremonial flower for Day of the Dead celebrations. Their raucous colors hem in a little plot of life between chain-link fences. And, to Fidel’s surprise, he learned they make for great natural, organic pesticides.

Don Bustos’ plan has just begun. He has other training programs growing in the north, south, and east of the state where different climates mean different plants. The aggregation continues. Recently, when the Albuquerque ACN growers ran low on produce for the farmer’s markets and CSAs, some southern New Mexico growers chipped in and helped fill their orders. With the different climates and produce, there’s not too much overlap throughout the state, so the farmers can work together, rather than everyone competing in, say, the same tomato market. And since all the seeds trace back to Bustos – both the actual seeds and the organizational and educational seeds – sharing is no problem.

So New Mexico food, from farmers like Fidel, is moving deeper into the state’s schools. When it comes time to sit at the acequia table and discuss water rights, this network of small farmers will be the ones feeding the state’s children. Is there any stronger voice than that?