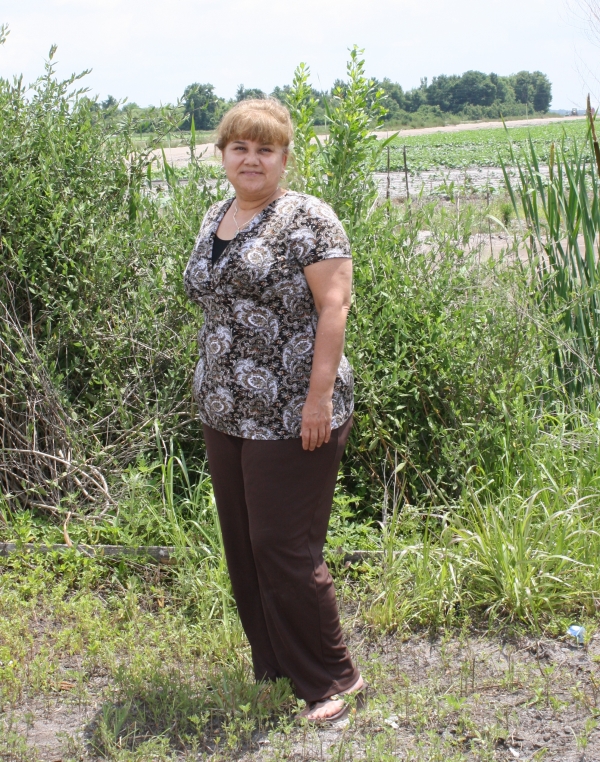 Ana Luisa Trevino came to the United States in 1972 from Matamoros Tamaulipas, Mexico. She was eleven years old at the time. At thirteen, she started working as a farm worker, and did so until age twenty-five years. Ana finds that immigration rules and regulations are the biggest injustice for migrant farm workers, plus the lack of environmental and safety regulations.

My mother decided to come to the United States for a better future for us. We were very poor. The poorest of the poor in Mexico. Three of my brothers died because of little food, no medication. My mother worked in the fields for us to legalize our status. We stayed in the border, in Brownsville, for a year or so. The following year, we came as seasonal farm workers. I was thirteen.

Right now, we don’t find children working in the fields. Sometimes on the holidays, the

Most of the children are getting lost in the system or are staying behind with families that don’t have extra money to support them. There should be restrictions. Back in the day, they did not deport a mother or a father. They let you stay with your children. Now, you are in a car with your children, they don’t care. The children will be crying and they take both of them: the mother and the father. children work and help the families, but not during the week. The laws are different now. It is not permitted. When the police see a child not at school, they ask. But, they don’t take into consideration the young children and the babies that are being separated from their parents, now, with all these deportations after 9/11. Because of the deportation, families are taken advantage of. They are mistreated. They work overtime. The way they look at you, the way you dress, you are a target. People are afraid of talking. Even people who are legal citizens, legal permanent residence or in the process of getting legalized. They are afraid to report any wrongdoing.

Many of the workers are women and many are being abused verbally and physically. They don’t want to report. Even if the women trust you and they give you the whole story, when you are going to put it in writing, they say everything is okay. You call the Department of Labor and they don’t have any reports. A lot of women are getting sick because they don’t drink water; they don’t go to the restroom because of the workload.

In Apopka, we have the forest and nursery industries. They are working under the sun and are getting exposed to a lot of heat and pesticides. The impact and the evidence of the pesticides on the women are children born with head problems, respiratory problems, rashes. There are so many chemicals and pesticides that you don’t know what they were exposed to.

We have some cases of women who have children that are born with no brain or with birth defects or heart problems. These are women who have been working in the fields and the nurseries more than 15 years. This is the proof that we see. It is not scientific or a specific study.

I faced a lot of discrimination when I arrived as a child. I saw a lot of things I did not like. Long hours, no breaks, a lot of hard work. I said, ‘This is not right.’ I went through a lot and I do not want anybody else to go through that. I decided enough is enough. I lived in one of the camps provided by the company and I was afraid my family would get fired, but I decided not to follow any more. I joined the Farm Workers Association as a volunteer. Little by little, I started learning and helping the community. The work that I do with the community as an organizer is to be there. Sometimes just listen. Talk about the rights. You are a human being. You are in a country that has rights and laws that can protect you. It is education. You tell them and give them the tools, but you cannot force them to use them. We organize the community. We go to the fields and talk to the people one on one. We show them avenues. Fear is always there. We do what we can do. If you give information for eight people, one will come back and be a leader. We have women–very strong women that are leaders and they are helping others.

Sometimes, people ask, ‘why are you here, you suffered that much?’ Because, in your country, you are the poorest of the poor. You work in a week and you get paid less than $5 and you work very hard. With that money you cannot provide for a family. You always look for the best future. You always look for that little light at the end of the tunnel.

It is important to see the face of the farm worker. They take away our pride and whatever we have when we come here. Sometimes even our clothes. And sometimes we are abused. Treated less than animals are treated, because animals have rights. Human beings suffer a lot. I want people to know that.

When you see a flower, vegetable, remember a face. A child, a woman, a man that worked hard to harvest that vegetable, that plant.