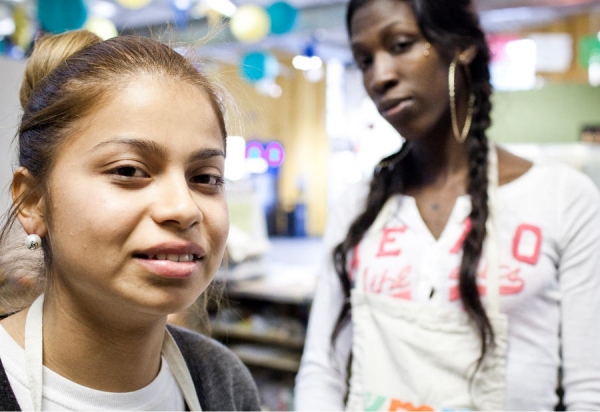 Daniella, 18, used to ride her fixy bike all day, just to be outside. She doesn’t like being inside, it makes her feel trapped and closed-off. It’s not that she comes from a bad home, just a crowded one. Her mom left the family of eight children when Daniella was five. So her dad took care of the kids. He cooked at a golf club so and made all the meals at home, and not just traditional dishes from their native Michoacan. Mr. Gallegos cooked chicken alfredo, sweet-and-sour pork, lasagna. They only ate fast-food, what Daniella then considered a treat, once a month. Mr. Gallegos’ mom, Daniella’s grandma, had made him learn how to cook for himself when he was a young man because she said women are crazy and yours might just leave you one day, so you better know how to cook.

Irene, 25, also knows a crowded house. She and her seven siblings grew up only with their mom. Irene’s mom cooked every day of the week, leaving only weekends for the kids to buy the junk at the corner stores and fast food. They ate breakfast and dinner at home. It wasn’t mandatory, but no one missed dinner at home. Why would you if mom was cooking? It wasn’t necessarily healthy – greens boiled for too long and with bacon. Meat fried. But it was a home-made meal and all the kids learned how to cook. 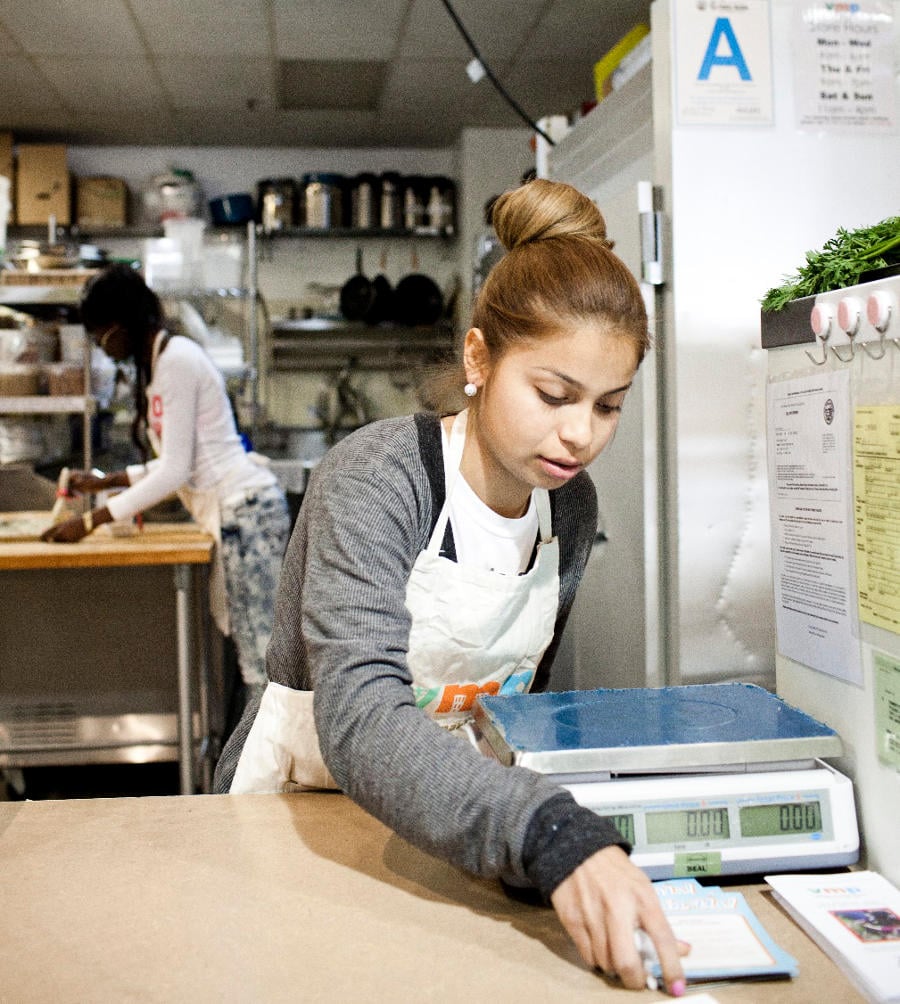 So these two girls working behind the counter at the Village Market Place café and produce stand in South LA’s Mercado La Paloma, have a few things in common besides growing up on the rough streets of South LA. Both have graduated from high school and both found the Community Services Unlimited program because they are enterprising young women who want to succeed on their own.

CSU came about as a partner of the Black Panthers’ southern California organization, which had a significant food security presence dating as far back as the 60s when they provided breakfasts at community centers and schools. With the demise of the Panthers party in the 80s, CSU began engaging the community more and more through food and food justice efforts. Now CSU has a number of programs, all of which have benefited from the USDA’s Community Food Project (CFP). From the Ground Up is a youth training internship developing leaders in food and social justice. Growing Healthy works with a younger age group, teaching them food nutrition and the basic tenets of food security and justice. They ask the young people what they see in their neighborhood in terms of food, and they interview neighbors about their food buying habits. There’s the Home Garden project to encourage, educate, and provide resources for residents wishing to grow their own. And, finally, there’s the social enterprise and small-business program called Village Market Place that takes the other three arms of CSU and puts them to work in the community.

Daniella was a tutor at a learning center in the community. A CSU staff member came to the center to talk about a summer internship working on the CSU urban garden at the Exposicion Center. Daniella saw the internship as her chance to be outside and not be worried about the dangerous streets in South Central. Since her tutor bosses wouldn’t let her take the internship, she quit the learning center and worked at the garden.

It turned out to be more than just a chance to be out in the open, without walls, or restrictive gang territories to box her in.

“They (CSU staff) taught us how to garden,” she says. “But we also did workshops to talk about why we were growing our own food, what organic means, what it means to control your food. Things started making sense, like why there are so many fast food places in our neighborhood while other neighborhoods that come together as a community can take charge and not let a McDonalds come in.”

Daniella wants good things, nice clothes. She knows her dad, who now has terminal cancer, can’t buy her that stuff since there are so many kids. So she’s working for it herself. This is her third year with CSU. After learning the ropes at the garden for two years, she’s now working the Village Market Place café five days a week. She prepares healthy lunches for sale, organizes the produce, and packages “produce bags,” a sort of week-by-week-purchase program similar to a CSA share, but more conducive to EBT consumers who can’t pay lump sums at the beginning of the growing season, as in the traditional CSA model. 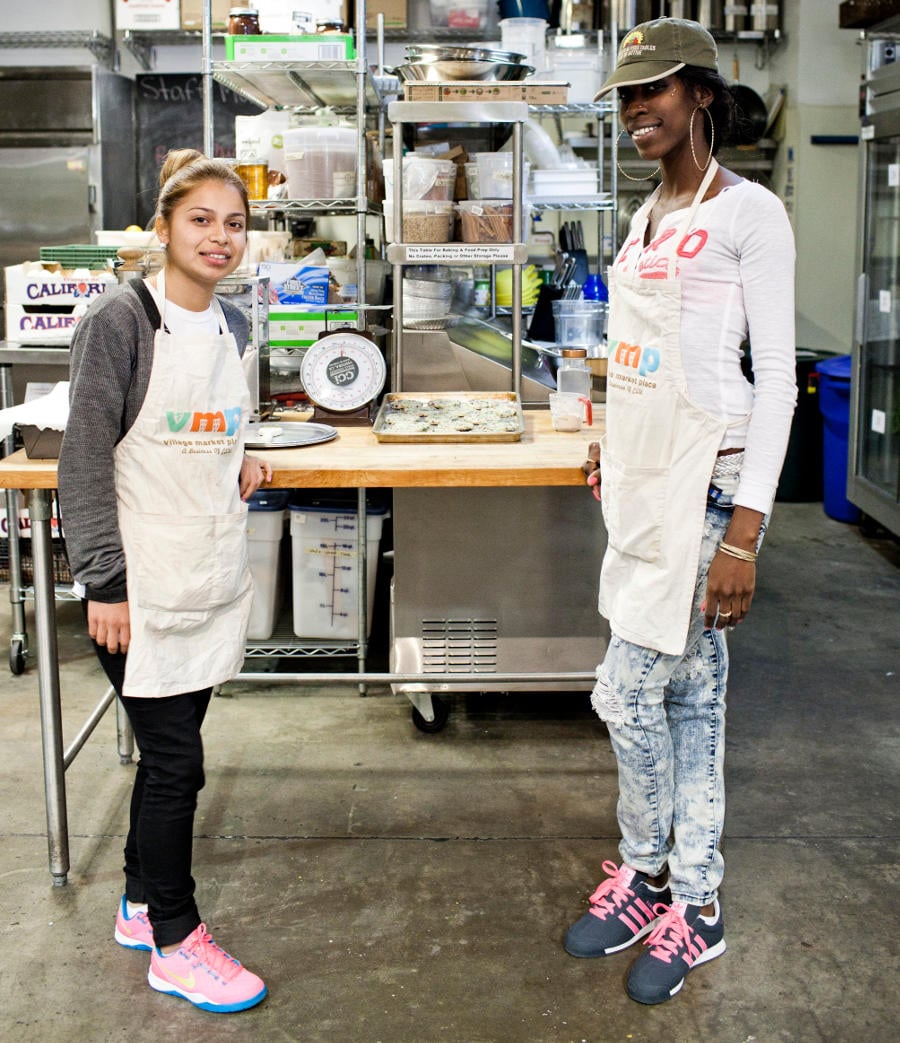 Irene has a child of her own. He’s one year old and it’s just the two of them living together in an apartment. Irene hates taking him to day care, but she has to work. Irene began working as a CSU summer garden intern, as well, at the age of 21. She and a cousin went to a community job fair and learned about the garden internship. After the summer internship ended, Irene continued as an apprentice with CSU, then was offered a full-time job with the program but she declined it because she was working at the Post Office at the time. Two years later, in 2012, she was offered another job with CSU, to work in the new Village Market Place farm stand. She took the chance to expand her work in the food justice world, a concept she’d learned about, along with new terms like “organic,” during her internship.

Now Irene and Daniella prepare black-eyed peas and cornbread or rice and chana (a chickpea stew with roots in Northern India) dishes. They tell customers about the produce for sale, all sourced from a half dozen farmers in the southern California growing valleys, and some from the CSU garden where the girls began to learn about food and to be outside in a safe place in south LA.

Irene’s proud to be living on her own, with her son. She’s proud that her mom raised all her kids to strive to do well, and that all but the youngest brother (“he’s a mama’s boy, you know!”) have moved out and live in their own places. She wants to be a pediatric nurse, but she’s not sure about getting that far while her child is so young.