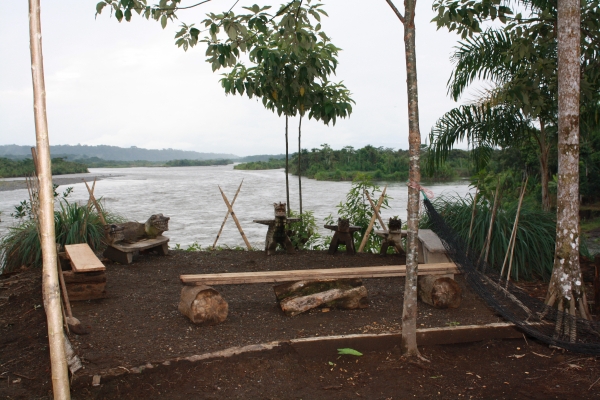 Juan Uyunkar is an Uwishin, or natural doctor, of the Shuar people of the Ecuadorian Amazon. He has been trained in agronomy, attended veterinary school and extensively studied natural medicines. He gathers herbs from the Amazon to treat people with illnesses that range from cancer to paralysis to spirit possession.

De-contamination of the body is a part of the basic principle of nutrition. The first nutrition received with natem is the premiere nutrition, complete nutrition that feeds the body, feeds the soul and gives salts and minerals. In total, it harmonizes. Nourishment is medicine for the body and medicine for the soul. Food has to be balanced, in accordance to the necessity of the organism. In the old days they were wild, then Nunqui blessed us and taught us what plants we should have in our farms, how to grow, how to harvest, how to process the yucca. The leaves serve for nutrition. The flowers are medicinal. The bark is for tea. The tuber is a food. It is the first food in the native life. It is also the maternal milk. Instead of cow’s milk, the milk of yucca is what we give babies. It is very sweet. It protects the intestinal bacteria. The yucca is curative. It cures cancer. It cures gastritis. It cures intoxication. It cures constipation. The yucca is like daily bread.

On the Ecuadorian coast, they are making yucca, but it is another variety of yucca. On the coast they use chemicals and it damages the food. It makes the yucca hard. It doesn’t cook well. Here, it is delicious and we use no chemicals. The corporations are growing yucca and they are fumigating the earth and making it poisonous. They have destroyed banana plantations to plant yucca and they had fumigated the land for the bananas. They had corn, where now they are growing yucca and before they had beans and peanuts and now they are growing yucca, but the land is poisonous. That earth has been poisoned. The yuccas at the big supermarkets have chemicals in it. None of the original people – the Aguarana, the Quichua, the Shuar, the Huaorani, the Achuar, Huambisa – are using any fumigation. Their food is clean.

Every year, food production is getting smaller. Every year, the yucca and plantains are getting less and less. Other fruits – like oranges are being fumigated. The original people don’t do that. Those who are from the city, when they make farms, they fumigate. People brought cows in that killed a lot of the jungle, and then they fumigate near the cows. The corporations, transnationals and the foreigners are damaging the land. They are damaging our products and our foods.

This is what we are protesting. Not only the chemicals, but also the oil people and the companies that extract metals – those that are taking out bronze and gold. The mines are damaging the rivers, because they are throwing mercury into the rivers. They are here now to extract copper. These people are contaminating the land and the water.

Normally, the original people’s gardens are near the riverside. Now, toxins come down from the mountains for kilometers of contamination. Besides this, the tourists leave plastic, cans, cigarette filters. That is also contaminating the land. The plastics take more than 400 years to disintegrate. It is all turning into pollution. But, the most damage comes from the oil companies.

The water is not drinkable because of the petro companies and the mining. We can’t drink the Pastaza or Puyo rivers. It is all contaminated. We eat the fish from there, but they are contaminated. In the future, it is going to get worse. Once they take the petroleum, the earth becomes unbalanced. The petro pits are here and the trees are over there and the trees have a temperature that is calibrated. Without the petroleum, there is not enough heat to keep the trees calibrated. It ruins the equilibrium. When they take out the petroleum, they put in salt and other chemicals. They put in water. It causes the earth to tremble like an earthquake. For us, that oil is the fat of the earth. The oil moves through the earth and keeps everything balanced. It protects Mother Earth.

Now, the state is trying to control the steel chainsaws. The government is starting to take the oil out themselves in the Yasuni Park, which is known as the lungs of the world. It is not just in that territory, it is here too. We are fighting this. We are saying NO! And the government is against us.

When they come, we protest. We close the airports. We have demonstrations. We get up and stand. There is always a confrontation. We stop the government, the police, the military. There are always deaths after the demonstrations – police dead, original people dead. In February 2010, there was a confrontation in Macas because of the mines. They killed a Shuar professor. The Shuar Federation has a satellite radio called Arutam. When it was announced on Arutam that this professor was killed, the Shuar got up with their lances and walked to Quito, protesting. Three thousand Shuar armed with lances and painted walked to Quito.

Instead of investing millions of dollars to develop the atomic bomb, produce arms, airplanes, rockets, the United States, Europe, China, Japan, the most industrialized countries should invest millions of dollars to grow all kinds of trees and raise all kinds of animals. If you destroy a giant tree, you are destroying the medicinal properties that grow in the branches. Orchids, plants, frogs, birds, monkeys, insects, animals grow and make their homes in those giants, ancient trees. If you kill a branch, the tree dies, as do all of the habitats down on the floor of the Amazon where there are medicinal plants that only grow in the jungle. The biodiversity of the Amazon will become extinct. The Amazon should be a garden, should be a paradise. It must be protected.