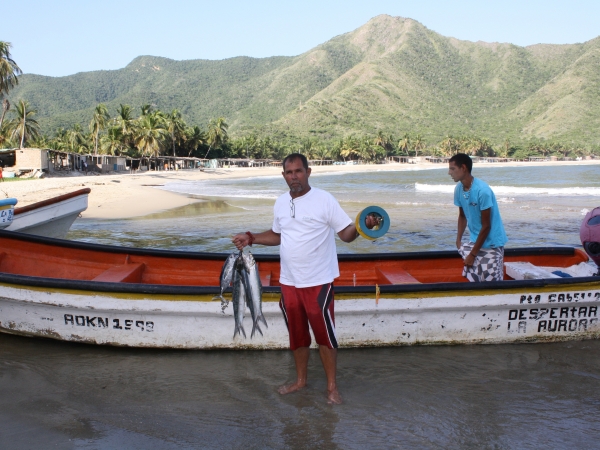 Julio Cesar Moreno fishes for a variety of fish on his boat,ElUno. He is the spokesperson for the National Organization of Artisanal Fishermen and Fisherwomen and for the Artisanal Fishermen of the Social Front. He is also part of the fishing secretariat of ALBA – The Bolivarian Alternative for the Americas.

Chuao is accessible only by boat and surrounded by mountains and cacao trees. Unlike many fishermen, Julio did not grow up in a fishing community. His father was a veterinarian and his mother a coffee farmer, but after 21 years of being a fisherman, he is part of the fishing community and fights to protect it.

Julio is enthusiastic about fishing and the work he does to maintain a space for the artisanal fishing community. At daybreak he moves with ease through the quiet waters. Julio usually fishes with his son and twenty other fishermen, but today it is just, Julio. He talks about life as a Venezuelan fisherman. “The situation of the fisherfolk here is good right now. The law of fishing and aquaculture protects us. The important element of it is the collective, not the individual.”

Julio is concerned about the future – and not just his, but the future of his community and the resources. “The resource that we have is a finite resource and it has been over exploited in the past. We, the fishermen, as well as the government want to make sure the next generation is able to use these resources. We have felt the impacts of more pollution and climate change, which is making there be less fish. Here, the Caribbean is feeling these impacts less than in other areas. Up until when are we going to be able to resist these broader environmental impacts? We, the artisanal fishermen, together with the progressive governments have to make sure that we do our part to maintain this resource as clean and healthy as possible.” Venezuela is a leader of an alliance of progressive governments in South America, and the Venezuelan Constitution is one of the first to succinctly outline the need and the tools to promote food sovereignty for everyone. It ensures that farming and fishing communities have the tools they need in the form of infrastructure, including boats and nets. It protects and enhances the non-industrialized fishing communities and the waters along the coastline.

Venezuela has some of the most advanced fishing laws in the world. In 2002, the government prohibited industrial trawling in the continental plate to help replenish the fish populations. Trawling was slowly phased out and finally, on March 31st, 2009 the ban went into effect and trawling was completely eliminated. It is the only country to ban trawling.

Industrial trawlers generally only keep a total of 6% of their catch. The rest they dump back into the ocean as waste – called bycatch. Julio explains, “Trawling does not give the opportunity to the little fish to grow into big fish and reach sexual maturity. It disrupts the environmental equilibrium in the marine ecosystems.”

At about the same time, Venezuela passed another law prohibiting the use of chemicals on land that were known to have a negative impact on juvenile fish. Combining those two precedent-setting laws, the small boat catch throughout Venezuela increased by 8% in just a few years. Julio and his fellow fishermen are committed to creating and adhering to rules and regulations that benefit the resources. He tells me, “The areas of the coral reef formations are completely prohibited to fish. So are the island zones, national park areas, areas of special concern. These special areas have either a very important cultural significance or national strategic significance. We don’t have nets too close to the beach because they could entangle children. We don’t permit capture of sardines here, because sardines are the first on the food chain and are important for the other fish. We only capture the large fish. All the smaller fish, we release so they can grow.”

What makes Venezuela so unique is that it is not just about protecting each species, or conserving specific areas of essential habitat; it takes everything into account, including respect for human life. Julio: “Our fishing law is also about all the fisherfolk being able to have dignified lives, to be able to have dignified homes, dignified jobs, decent boats. To be able to access an education. Once we retire, to be able to have a good pension. These are some of the achievements of the revolution that we fishfolk have helped bring about. And to always be able to enjoy a good plate of fish.”

Chvez, H. (2007). Message from the President of the Bolivarian Republic of Venezuela, Hugo Chávez Frías, to the Forum for Food Sovereignty Nyéleni 2007.