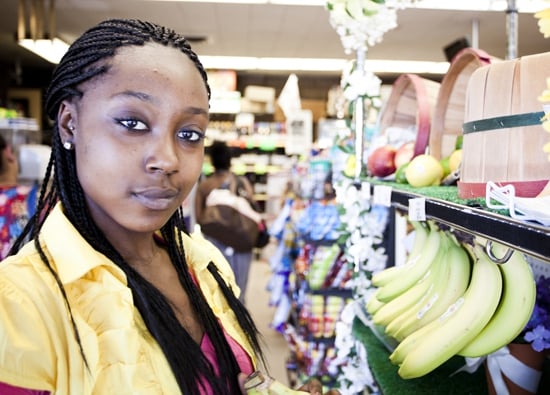 Three corner stores in West Oakland now have produce stands in them. They are small and, as far as inventory numbers, dwarfed by the remainder of the store. But a funny thing happens when you walk into the Bottles store. Your eye goes straight to the fruit and veggies. They are so out-of-the-ordinary from what our brains have been trained to expect in such a homogenized, artificial food environment. The store suddenly does not feel so sterile and packaged. With vegetables and fruit on decorated stand, Bottles suddenly does not make such an easy metaphor for inner city blight and decay.

So Mandela Marketplace has two other projects. Earth’s Produce is a distribution center for small farmers. Small farmers bring their produce to the central location where it can be distributed to farmers markets and other outlets. It’s a way to save the farmers time and money since they no longer have to shop their produce around to the various farmers markets or organizations. Earth’s Produce finds the market for them.

Mandela’s third project, and the beneficiary of the Community Food Project, is their Healthy Neighborhood Store Alliance (HENSA). Recognizing that many consumers in the community would not frequent the Co-op for groceries, Mandela staff looked at the easiest conduit for getting fresh fruits and vegetables to the residents. Nothing is more ubiquitous in West Oakland than the corner store. People go to them multiple times in a day.

So in 2009 Mandela partnered with the WYSE employees to assess the corner stores and determine which ones should harbor the fruit stands. They sent out “secret shoppers” – Jamelah and her counterparts – to evaluate stores and their owners for cleanliness, interaction with customers, and the opportunity to market via signs.

The WYSE youth then approached the store owners where a fruit stand seemed appropriate. They got the owners to buy in and then Jamelah and the WYSE team took over the stands. Sourcing produce from the Earth’s Produce distribution center, they sell the produce to the store owners at cost, so they are invested in the program, as well.

Jamelah restocks the Bottles shelves three days a week since the produce sells pretty well there. She decorates the shelves according to the season – white and yellow flowers for summer, orange and red leaves for fall, and fake snow and Christmas ornaments for winter.

Bananas, tomatoes, and avocados are the hottest summer sellers in the Bottles corner store veggie stand. But soon it will be apple season. Jamelah plans to run some sales and specials on apples when that happens.

“What makes me do this work?” Jamelah asks herself. “My grandpa, who I live with, has diabetes. He used to tell me don’t get fat. So I watched my diet when I was little. I ate a lot of noodles, fruits, veggies.”

The diabetes rate in West Oakland is three times higher than anywhere else in the county.

“I’ve always known I wanted to help my community,” Jamelah continues. “And I’ve learned that eating healthy is a great way to help. I’ve just had so many relatives get sick with heart disease, blood disease, diabetes.”

“People pay attention to what we’re doing because we’re young and they think young people would be doing something else. We just gotta get people to feel where we’re coming from and see the big picture, that healthy eating is a big part of a better community.”