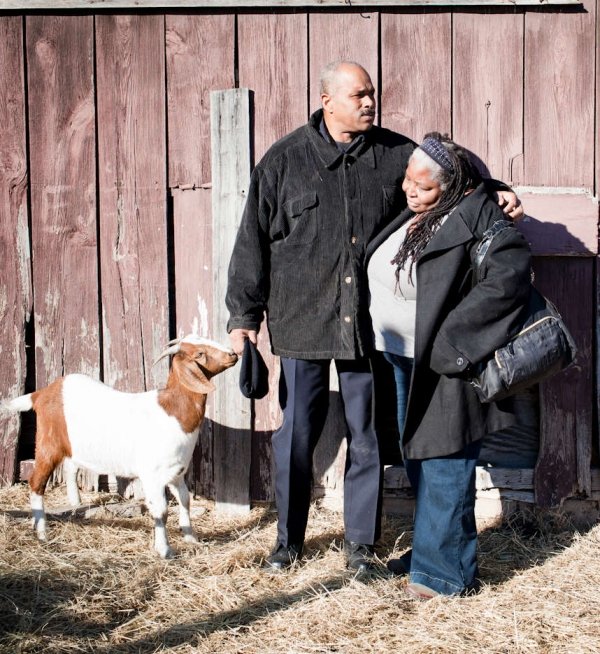 Rufus Newsome presses his ear against the cold wooden side of a beehive. His massive hand nearly covers the top of the box as he listens for a barely audible hum. He hears it. The hives are surviving the dead of winter in Oklahoma’s Green Country. They’ll live to pollinate another crop of clover and the orchard of peach, pear, and apple trees at Newsome Community Farms.

As we walk back toward the Newsomes’ farmhouse, a mini-van pulls into the driveway off the roadside. A young woman gets out and waits at the farm gate for Rufus to walk over. She’s run out of gas and has called for someone to bring her a few gallons. Three young children and another young woman wait in the car. Rufus says he’s got some gas in the barn.

“I don’t know why, but cars are always breaking down right here,” Rufus says as we look for the small red gas can in the barn. “I get people knocking on my door all times of day and night.”

Rufus, a Tulsa police officer when he’s not a farmer, thinks it’s because his cop car sits in the driveway. It also could be because Rufus and his wife Demalda have created not only a five-acre farm on the rural outskirts of north Tulsa, but a small community welcome to all.

Demalda and Rufus met in the fourth grade in Greenville, MS. “I remember seeing him and thinking, ‘that boy will be my husband,’” Demalda says. 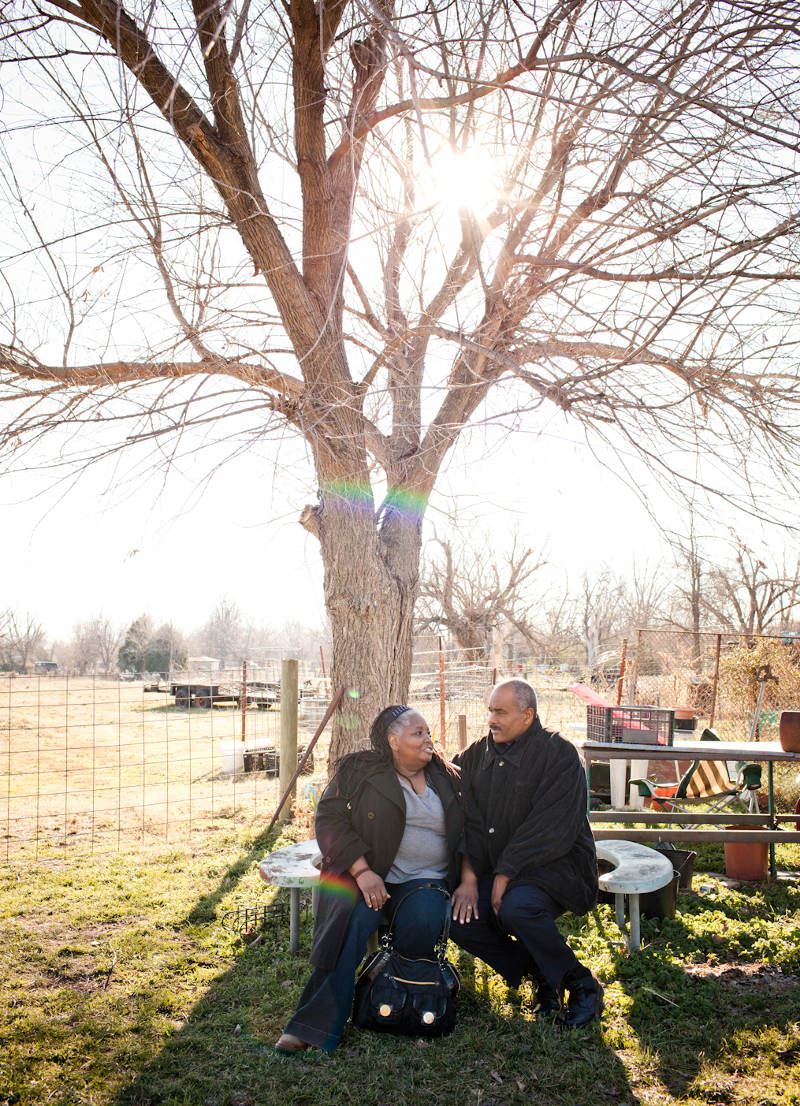 They didn’t see each other again until the 10th grade, then they started dating as seniors in high school before attending Mississippi Valley State University. They’ve been together ever since.

In 1995 the couple bought the old farm on the northern skirt of Tulsa city limits. They’d grown up on farms in the Delta, and they hadn’t been too far gone from it to know how to raise their own food and animals. By 1999 they had enough farm going to start a market on the property.

The Newsomes are not the back-to-the-land types who want to disappear behind the farm fence. Rufus works over fifty hours a week on street patrol with the Tulsa police. And Demalda does her own sort of pavement-pounding. She works the predominantly African-American and low-income North Tulsa community, sharing the tenets of food justice and the power that comes with controlling your food.

Demalda and Rufus’ journey into food and community activism and altruism has deep roots in their upbringing in the impoverished Mississippi Delta and in Demalda’s Catholic faith. She believes you pay your rent on this earth by helping others. In their early years in Tulsa, before moving onto the farm, Demalda and Rufus took an apartment in a low-income housing project. They didn’t need to, but to Demalda it was a form of missionary work right there in her community. Why travel around the world when there are needs in your backyard, she thought. They worked within the housing community to teach people healthier ways to live. Eventually, their young son, Chris, grew uncomfortable in the confined space and asked that they leave the projects.

Chris was always a precocious one. At age six he had a dream. He’d been suffering from headaches so severe they caused seizures. One night an angel came to him and told him that if he wanted to feel better he needed to study the Word of God and stop eating meat. So he did both. After asking him challenging questions to assure his knowledge, the church baptized the young prodigy. As for the food, that was Demalda’s realm and she had to start looking into new options.

“So Chris started us on this journey,” says Demalda. “We moved out to this farm partly so we could grow more vegetables and have a healthier, more affordable diet.”

“Since we were leaving the work in the low-income housing community to move to the farm, Rufus and I thought we needed to bring other people along. How can we serve our community? That’s where I realized God designed a food source that’s less expensive and more efficient than stores, so we went to growing our own food. And Rufus started a Boy Scout troop. We kept over seventy of the Boy Scout kids at different times, when their parents were in jail or absent. We fed the children. Meat was expensive so I had to look to cultures with food traditions that used rice, peas, beans, and other healthy products for big meals without too much meat.” 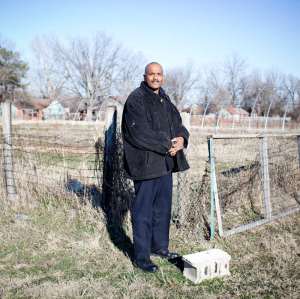 North Tulsa EATS offered Demalda a platform to teach within her community, hire teens to work on after-school garden sites and at the farmer’s market, share trainings with community members, and prepare her son Chris, now grown up and involved in non-profits, to carry the torch of healthy community food action. Chris became involved with Oklahoma food policy and attended a Community Food Security Coalition training course to learn about the Healthy Corner Store Initiative and the policy behind it. Chris returned to Tulsa and began, with other groups, to lobby Representative Seneca Scott to launch a Healthy Corner Store Initiative in Tulsa. The legislation passed and is now waiting for funding (dependent upon interest rates and other political hold-ups).

Demalda, at her core, is a community organizer. She insists that for grassroots projects to work, individuals and organizations have to look at a community’s assets just as much if not more, than at the community’s needs.

“What I’ve learned through getting projects started,” she says, “is the ones that are most successful are the ones with partners. You have to look at it not from a deficit basis, but from an assets basis. Look at what the community already has. Not what they don’t have. You need to talk to the people in the community to hear that. Get in where you fit in.”

Demalda has noticed disconnects when outside groups come into North Tulsa’s communities of color. The group installs a raised bed and it dies in a few months because the community was not told that they were responsible for the upkeep.

“Building gardens is one thing, but you have to know what to do with it or it falls apart,” Demalda says. “When you knock on doors, they interpret that you’re going to build a garden and they can come get the veggies. They don’t necessarily know that they need to work on it.” 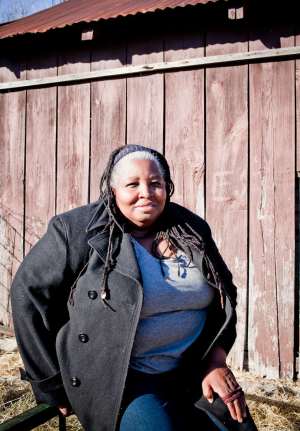 “A lot of low-income people are set up to receive, not really to give. Volunteerism is not part of the conversation – the idea of working for free is silly. They are thinking, ‘That white girl brought us some tomatoes.’ It’s sad. You have to come in with someone who’s already working in the community and it doesn’t have to be a person of color – but it has to be someone who gets it.”

“For example, in our culture,” Demalda continues, “to be big is not necessarily a bad thing. In a lot of communities of color, to be thick is to be fine. She got a bedonk-a-donk!”

“So instead of going into a community of color and talking about ‘obesity,’ I like to ask people to share their family history. I’ll ask, ‘Do you have family members who’ve died of diabetes or had their leg amputated from diabetes? That hits home. Then we can start talking about the diet-related reasons around diabetes.”

North Tulsa EATS has faded since the CFP term ran out in 2010, but Newsome Community Farms lives on and Demalda and Rufus continue to promote healthy living around North Tulsa. They open the gate to their farm during the growing season and sell produce and show people the food growing in the ground. Demalda plans to put together a cookbook around faith, food, and justice. She has volunteers to help.

On this day, Rufus pours a gallon of gas into the mini van’s tank. He tells the woman to go straight to the gas station. He asks her if she needs some cash. She says she’s got cash, but thanks. The engine fires up and she continues on her way.