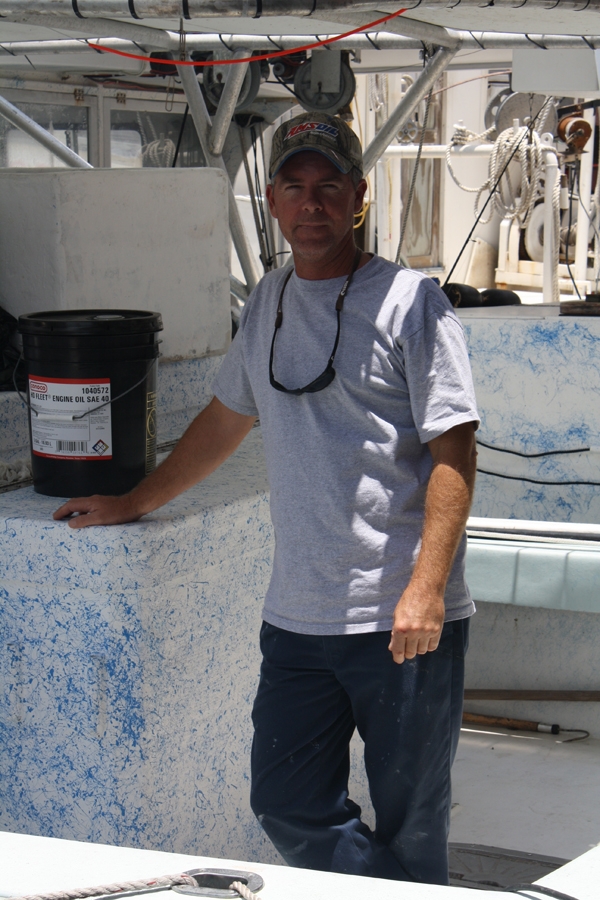 Richard Scott hook and line fishes for king mackerel and red snapper on his fishing vessel Schatzi. He has been fishing for 20 years and started in Florida, but moved to Grand Isle, because of the longer fishing season and the larger trip limits. But, over the years, as the fisheries have been privatized under individual fishing quotas, Richard is finding it harder to make a living fishing.

They just put in place IFQ on grouper and tilefish last year in the Gulf [of Mexico] and they don’t even push overfishing as the reason why they want IFQs. They push safety and stewardship, which all they’re doing is privatizing a public resource.

They’re allowing a few individuals with history in the fishery to obtain these catch shares and when the quota gets increased, they benefit and the rest of us don’t. When they increased the quota, why can’t they give all the reef fish permit holders a percentage, not just the allocation holders?

The one I lease from is retired. He controls the price, so it can change year to year. The going rate is $3.25 a pound for red snapper and I come to the dock and I get $4.60. So, he gets $3.25 and I get the rest. I made a few dollars with it, but under normal circumstances, you wouldn’t have made any money.

I got lucky and worked it out to where we sold locally and we didn’t flood the markets. We didn’t just go catch the fish and randomly sell them without a buyer. We actually had somebody say, ‘I want the fish.’ There is no new allocation to nobody except the people that are already in, so I’m stuck unless I purchase. If I purchase allocation from somebody, now I’m a stakeholder and if there’s an increase in the quota issued by National Marine Fisheries Service, I will receive an increase based on my percentage, but that’s not an option for me. It’s $30 a pound and that one pound makes you $4.50 per year. So, you fish seven years before you turn a profit. There’s not any sense in buying that. It’s all eventually going to be bought by corporations, and then, someday there won’t be a fisherman willing to fish for what they’re getting paid.

I own a reef fish permit for the Gulf of Mexico and you should be able to receive some quota when they increase it. You’re vested in it. They can see you’re leasing red snapper, trying to make a living. When they increase the quota by a million pounds, why not give that person one thousand pounds? Now, he’s got a stake in it, so he owns a tenth of a percent, so next time when it gets increased, he gets his tenth of a percent of the next increase. At least for all the years you’ve been fishing and you’re trying to catch this leased fish, you’re showing a vested interest in it. I believe a vested person should receive some allocation.

After five years of being implemented since 2007, you don’t have to own a reef fish permit for the Gulf of Mexico to obtain catch shares. Anybody can have them. You don’t have to have a boat. In the writings it said five years after the program is implemented starting in 2012, maybe 2013, an entity will not need to own a Gulf of Mexico reef fish permit to obtain catch shares. We don’t want that. Starting in 2013, Kraft, ConAgra, Phillip Morris, anybody can buy them. It’s a joke. If you’ve got $30 a pound to buy it, you can buy it.

Greed is behind it all. You’ve got hedge fund managers preaching to their investors that IFQ is the wave of the future – 400% to 500% returns on your investments. These people got the money to spend $30 a pound for snapper. If you buy in and you own five percent and the government gives another million pounds next year and you get 20,000 pounds ‘cause you own five percent, that’s paying off your investment. That 20,000 pounds is worth a lot of money so your eight-year investment, before you make a return, turns into six. Then two years down the road, when they give another million out, you get another 20,000 pounds, now you own six percent because your shares have been increased. The IFQ program destroys communities and small time fishermen, because it’s the big corporations or the big people with big money. It’s privatized a public resource and when you privatize a public resource, the little guy is going to go fishing for the big company and he’s going to make peanuts just like it’s been since the beginning of time. You can look back 3,000 years ago with the Egyptians and see that slave labor built the pyramids. The world has been that way forever. You’ve got people that want to own everything and sit on top and keep the little man down. It hurts the little fishermen like us. When you control the food you control the people. If IFQ comes down to king mackerel, I’m done. If king mackerel goes IFQ, probably 95% of us will be out of business overnight.