Hunger and climate change are two of the most pressing, interconnected issues of our time.

It is impossible to discuss the effects of climate change without addressing the crisis’s grave impacts on our existing food systems, and the environmental degradation accelerated by our current agricultural methods. As a result, issues such as hunger, poverty, and economic instability are exacerbated across the globe.

It is critical that we move away from industrial agriculture, a depleting, exploitative form of food production which is seriously harming our planet from an emissions standpoint and putting people involved at risk—not to mention threatening the well-being of future generations. 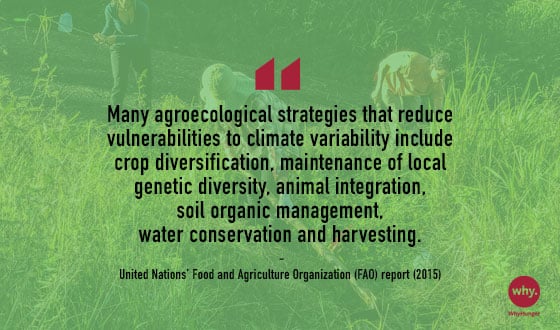 How do we begin to address these issues? How can we create a just food and farm system that places people and planet back at the center?

The powerful solution is agroecology, a set of sustainable practices that produces abundant pesticide-free food, replenishes the soil—acting to mitigate many of the effects of climate change— and strengthens small-scale farmers and their communities. Agroecology is a way of putting the power back into the hands of the people, producing high quality food and strong local economies.

A 2015 report by the United Nations’ Food and Agriculture Organization (FAO) called out agroecology as a climate change-resilient farming system, stating that it will not only aid in the current environmental crisis, but— coupled with community engagement— will bolster economic opportunity, promoting the livelihoods of people across the globe. In addition, agroecology has the power to mend deep-rooted social issues like hunger and poverty through revitalizing economies, creating jobs, and restructuring existing systems of power to give people control.

• 30% of all greenhouse gas emissions are produced by industrial agriculture

• 100% of carbon emissions can be captured and retained by agroecological processes, while also conserving water

Agroecology is undoubtedly a powerful solution to many of today’s most pressing social and environmental issues. WhyHunger believes that in order to change the food system and provide food for the masses, we must scale this viable alternative. Agroecology is key to producing better quality food, revitalizing local economies, and providing sustainable livelihoods for millions of people across the globe.

That’s why over the past five years we’ve trained over 104,000 farmers in sustainable agroecological farming practices and invested over 3.25 million dollars in grassroots movements across 25 countries.

Ultimately, study after scientific study demonstrates that agroecology has the ability to produce enough food to nourish the planet while feeding the world—without sacrificing the health of the people. Implementation of this alternative food system is critical, as it will empower communities to break cycles of hunger and tackle the urgent climate crisis.

Learn more about the importance of scaling up agroecology from global leaders here.

To invest in true solutions to hunger & support WhyHunger’s efforts to empower communities across the world, donate here.