WhyHunger catches up with Somos La Semilla, an organization in Southeastern Arizona that combats food deserts. 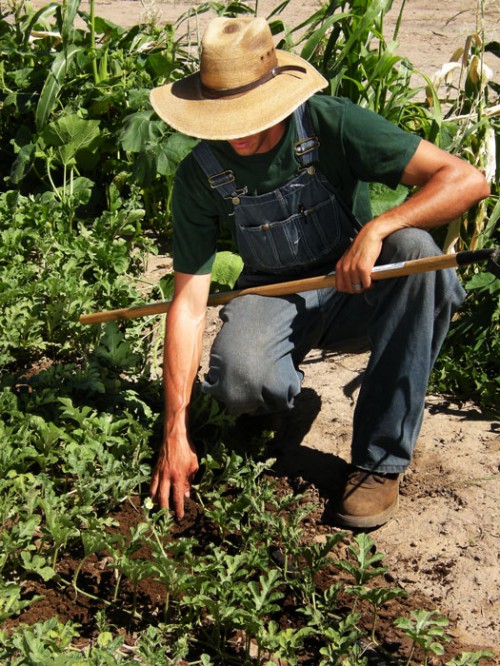 Once again the Arizona landscape has tested the limits of this East Coast girl’s imagination. Alongside the dry beds of the Santa Cruz River on the south side of Tucson is a stretch of 7 acres nestled in what is a classic urban food desert (a neighborhood with only one grocery store more than a mile away) that is slowing being turned into a productive farm. I was back in Tucson to work with the Somos La Semilla network – a collective of community-based organizations, farmers and health practitioners – working together to develop sustainable models of increasing access to fresh, affordable, healthy food in the Sonoran Desert as it stretches from Tucson down to the borderlands.   Accompanying me were the filmmaker/writer duo David and Michael Hanson of Breaking Through Concrete fame to create a short film documenting the work of Somos La Semilla and to capture the essence of a rural food desert. 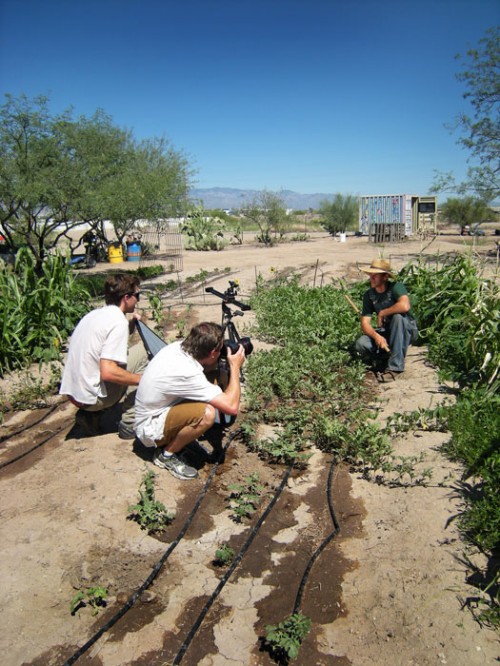 The Urban Farm – as this 7-acre tract of land had been recently dubbed – was an opportunity for us to learn about the Community Food Bank’s newest project and to document what has become a cornerstone of most efforts to address diet-related disease in urban food deserts.  Build a garden and they will come.  Except in this case the mantra has been:  Build community and the garden will come.   Robert Ojeda, the Director of the Community Food Resource Center of the Community Food Bank of Southern Arizona, explained that the focus for the past year has been on organizing the community living nearby — a low-income neighborhood with more than 400 trailer homes in the immediate vicinity of the farm  — to take ownership of the project, envision its future and the kinds of activities that would engage the whole community and help increase access to fresh produce.  So it stands to reason that when we pulled up to The Urban Farm only a portion of the 7-acre tract was in development.

As the temperature climbed to 104 degrees under the midday sun, I watched college students who were part of the Youth Farm Corps – a semester-long program for young adults interested in learning to run a farm – scratch at weeds with their hoes in the earth that resembled something closer to baked clay than the black humus of my New York garden. I couldn’t imagine that anything could actually grow here.  It’s a desert after all – complete with mesquite trees, fire ants, limited rainfall and parched land for as far as the eye can see.  Yet the students led by Chris Lowen, the Urban Farm Manager, were standing in a small but very green knee-high corn field.  Squash and beans would also be ready soon to harvest.  Chris explained that what we were standing on was 7 acres of “good soil for food production” and the site of some of the oldest agriculture recorded in the Santa Cruz Valley.  In fact they were forbidden from digging more than 2 feet below the surface because The Urban Farm sits on an official archeological site.  Still double digging as a technique to increase soil drainage and aeration was being practiced.  Organic matter – especially manure – was being added to the beds in preparation for planting.  And a drip irrigation system was slowing being installed. 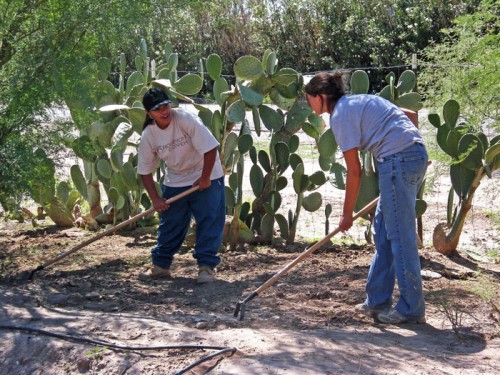 I stood under one of the handmade ramadas recently erected for shelter and, listening to Chris explain what was already growing and what would soon be planted, I found that I could start to envision the future of this farm myself. Two acres are currently being readied for production.  Thirty 14’ x 20’ community plots have been established.  It wasn’t hard to imagine that within a year the Urban Farm would be host to their goal of 100 community plots and a year or two later would have a full-blown farm incubator program up and running with farmers-in-training tending ¼ acre plots. Gardeners and incubator farmers would be growing for themselves and market.  A seed saving program was being discussed.  Chris said: “My goal is to work myself out of a job.  Management and oversight of the farm can happen at a community level.”  With community organizing as the foundation of the Urban Farm, there’s good reason to believe that Chris will be available for hire in just a few year’s time.