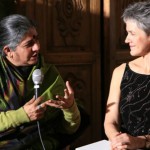 When I began my internship at WhyHunger, I was hopeful that I’d be given the opportunity to come within close quarters of strong voices in the food justice movement. Little did I know that into my second week, I would get the chance to hear the thoughts of two of the greatest trailblazers in this food movement – Frances Moore Lappé and Vandana Shiva. Frances Moore Lappé is the author of 18 books, all addressing various pressing issues related to food, hunger, democracy, and ecology. Vandana Shiva is one of the foremost environmental activists in the world, whose works include Monocultures of the Mind and Stolen Harvest, both works addressing the many problems associated with industrialized agriculture today.

Lappé and Shiva were speakers at The Small Planet Fund’s “Feeding Hope: Living Democracy” event at Cooper Union. This event celebrated 40 years since the publishing of Lappé’s salient work Diet for a Small Planet and 40 years of the global food movement. There were many powerful insights and metaphors shared by Lappé and Shiva, meant to convey the urgency of the interconnected environmental and human rights crisis we are in the midst of. The following points are critical ideas proposed by Lappé and Shiva, ideas that we must embody and translate into meaningful action:

• We must facilitate the paradigm shift from the “scarcity mind” to the “eco-mind.” Frances Moore Lappé’s concept of these two “minds” was especially interesting. The scarcity mind, she explained, is the motivation behind the destructive industrialized model of agriculture – the idea that we must overproduce, “conquer” and overcome the “limitations” of nature through more and more so-called “sophisticated” technologies, such as GMOs, synthetic pesticides and fertilizers, and nanotechnologies.

• Cultivate the “eco-mind.” It is the state of mind we must aspire to, one that works with nature rather than against it. The earth can provide for us, we just need to trust in its ability to do so! Similar to the point Lappé made, we must abandon the “militarized mindset” that Shiva says exists within agriculture – that weeds and biodiversity are the enemy. We must acknowledge the value they provide in sustaining us.

• Strengthen the role of the people and civil society against acts of aggression by corporations. For example, to date, India has prevented the adoption of BT Brinjal, or genetically modified eggplant, thanks to an active and vibrant civil society. Protection of native seeds is critical; it ensures the ecological health of the planet, and the social and economic well-being of the people.

• Continue to work for transparency within governments. As Lappé stated, “concentration of power,” “secrecy of government affairs,” and the “blame game” are the three damning factors that bring out the worst in human beings and prevent us from realizing true democracy within the food system.

• Rise up against greed-motivated patent laws. Shiva powerfully articulated that patent laws upheld by many governments and pushed by corporations are leading to the “enslavement of life”. Commodifying seeds removes them as a commons to be shared by all – thus leading to hunger and poverty.

• Acknowledge the myth that greater yields equal lessened hunger. Corporations claim that GMOs can help feed the earth’s growing population. However, as stated by Shiva, there is no evidence of greater yields by GMOs, and as argued by many economists, including Nobel Laureate Amartya Sen, hunger is the result of the improper distribution of food due to bad policy – not scarcity of food.

• Encourage our small farmers. As was pointed out by Shiva, and has been shown through extensive scientific research, small farmers are more productive and have a substantially greater ability to feed and nourish their communities.

Most importantly, think critically and be aware of the origins of your food. As stated by Shiva, “The idea that industrialized agriculture can feed people only works in places where people have allowed their brains to be hijacked.” Do not allow your brain to be hijacked!