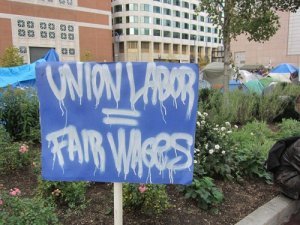 I recently met a very rich man who saw me reading The Price of Inequality by economist Joseph Stieglitz. The rich man asked me what the book is about and I said that it’s about the problem of extreme economic inequality in our country. He asked me what the author thought was the solution. I said higher wages. He was aghast. “Who would pay?” he said. I replied that the employers would have to pay their employees more. He laughed derisively. The conversation went straight downhill from there.

The truth is that American workers are the most productive in the world. US worker productivity increased 80 percent from 1973 to 2011, eight times as much as hourly worker compensation. The average worker is responsible for $63,885 of wealth per year. Yet more than a third of households make less than $30,000 a year. We have the highest percentage of low wage workers in the world–almost 25 percent. The people who bring us our food–farm workers, food processers, restaurant workers and grocery workers–usually make poverty wages. The people who we trust to take care of our children, parents, grandparents and sometimes ourselves when we are sick or disabled; people who work in nursing homes and hospitals; nannies, childcare and Head Start workers–all of these crucial workers are all too often making poverty wages. Fifty percent of personal care workers live in poverty. Most of them are women, and 40 percent of female-headed households live in poverty.

Although we have lost millions of jobs to automation, the computer age, and to countries overseas, most of the remaining low-wage jobs in the US cannot be sent to another country and will not be replaced by a machine. The people doing these jobs have families to support and often have to work two or three jobs to make ends meet. Most do not have health insurance, sick days or pensions. Few are represented by unions and so they do not dare to challenge their employers when they are treated unfairly or even have wages and tips stolen from them.

There are countless millions more who work in sales and services for companies that have low wage and minimal benefit policies. Most of these companies are highly profitable and say they cannot afford to pay workers more but they pay their CEOs and other high level employees outrageously high salaries even when business goes down.

Raising the minimum wage to ten dollars an hour and indexing it to inflation would be a good first step to repair our economy and help millions of families out of poverty. Enforcement of wage laws and prosecution of wage theft would add billions of hard-earned dollars to the incomes of the lowest earning families. Allowing workers to join or form unions without harassment or unfair dismissal has proven to enrich the lowest paid workers without bankrupting their companies. When will our country foster labor justice and when will labor unions make organizing the poorest workers a priority?

The myth of the “fiscal cliff,” the focus on balancing the federal budget, the frenzy for cutting the budgets for essential services and the hatred of raising taxes on the super-rich all miss the point. We need more federal revenue. One powerful way to raise revenue and grow the economy is to have the people who will actually spend money–the poor and lower middle class–have more money to spend.

Another very rich man–a billionaire, in fact–recently stated that because he is only one person, even though he is a billionaire, he can’t spend his money as fast and as effectively as the same money would be spent by the millions of Americans who are at or near the poverty line. Just one dollar of additional income for a low wage worker creates $1.20 of economic activity. Imagine that: if the Americans most in need had more money to spend–on food, school supplies, bus fare, and all the other essentials–they would spend it, quickly and efficiently, and in the process would create jobs and move the country towards prosperity.

The old saying goes: “a fair day’s work for a fair day’s pay.” American workers are doing their part. Now it is up to employers to do their part and pay their workers a fair wage that will allow them to support their families. Bill Ayres is the co-founder and Executive Director of WhyHunger.

Click here to read more about Workers in the Food System.