WhyHunger is pleased to be partnering with Andrianna Natsoulas, longtime food sovereignty activist and author of the book Food Voices: Stories From the People Who Feed Us. In 2010, Andrianna began a journey across the Americas to capture the stories of people working towards and living a just and sustainable food system. WhyHunger is featuring highlights of these stories, gathered from 70 interviews on a journey that spanned from Nova Scotia to Ecuador to Brazil and beyond, on the Food Security Learning Center.

Below, Andrianna answers our questions about her book and its connection to the global food sovereignty movement. You can purchase the book on Amazon and find out more on Andrianna’s website, Food Voices. 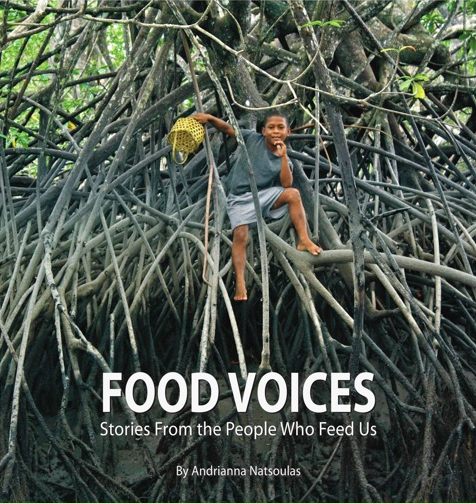 What inspired you to write this book?

I had been working in food, agriculture and fisheries policies for over a decade. Over those years, I watched the local food movement intensify. Then, in 2009, I attended a Community Food Security Coalition conference in Des Moines, IA. I was amazed at the number of people participating in the event and talking about food-related policies. But what surprised me even more were the absence of the people whose lives those polices would impact on a daily level. There was one table of farmers, one fisherman’s wife and about five farm workers. So, I decided I was going to collect their stories, their viewpoints, their struggles and their successes and raise their voices.

What do you hope is its impact?

First and foremost, I hope the people who are in the trenches are heard. The farmers and fishermen who feed us. One of my biggest goals for this project was to strengthen the food sovereignty movement in the United States – both among food providers and food advocates. Food sovereignty is a concept that is slowly gaining an understanding here, but it is not a framework that either food providers or local food advocates embrace. I hope the food movement relates to the food sovereignty framework in a way that the big box stores and transnational corporations will not be able to co-opt for their own financial gains. I also hope it will unite the efforts here to the larger movement, thus acting in solidarity and mobilizing with farmers and fishermen around the world.

How did you connect with the people interviewed in the book?

Over the course of nearly 15 years, I had been working with small-scale farmers and fishermen around the world. I chose the places I went based on contacts I directly or indirectly had. At times, I would connect with one person and I suddenly was connected to three to five more people. And, it could have kept going infinitely.

As you were traveling and collecting stories, what challenges did you face?

The challenges were minimal. I learned patience and flexibility. Sometimes I would have to wait a day or two to catch up with someone. Occasionally, meetings were canceled. I had to decline offers to record stories because of time and distance limitations. Some would be reluctant and wary to talk at first, but then their ideas and experiences flooded out of them. All in all, I absolutely loved meeting people and hearing their stories.

How do you see this book connecting to the larger discussion about global food sovereignty?