Harvesting Justice is a project of Other Worlds, created for the US Food Sovereignty Alliance and telling the stories of people changing their food systems from the ground up. Its latest blog post, reprinted with permission, focuses on the transformative work of WhyHunger partner People’s Grocery in Oakland, California. By Tory Field and Beverly Bell, with Deepa Panchang

The neighborhood of West Oakland in California has long been without a large grocery store, let alone one that offers healthy, fresh food. With unemployment at about 10% and nearly half the population of 30,000 residents living at or below the poverty line, West Oakland is a neighborhood that grocery store chains have claimed isn’t able to sustain a full-functioning store. But the logic that West Oakland lacks buying power isn’t sound. Its residents spend almost $42 million a year on food outside their community. “The math is simple,” said local activist and cofounder of the organization People’s Grocery, Brahm Ahmadi. “In West Oakland, we assessed a $60 million market. There’s a very affluent neighborhood nearby with a $60 million market. It’s the same aggregate spending power. You actually have parallel markets. They just look different.” 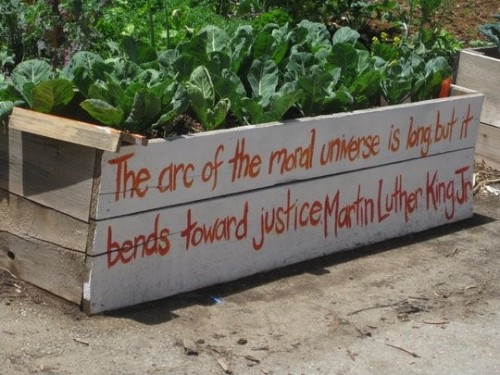 It was vital to prove that this was true because, said Brahm, “The number one cause of death in West Oakland is heart disease. It’s not gunshots. It’s food, the way people eat. There’s a correlation between lack of grocery stores and rates of chronic disease. People in West Oakland are seeing that health-care costs are too high, and a critical mass is growing to say enough is enough.”

When individuals are forced to travel outside their community for groceries, not only does their access to healthy food suffer. The economy does, too. Money continuously flows out of the area instead of building job opportunities and tax revenues locally.

The problem is national in scope. A research sampling in New York, Maryland, and North Carolina found that neighborhoods of color and racially mixed areas had half as many supermarkets as predominantly white neighborhoods. Residents without cars or adequate public transportation systems are often left to shop for highly processed food at corner liquor or convenience stores, where prices are usually higher and healthy options fewer than those at suburban supermarkets. A fast-food franchise may provide the only other nearby option.

In the US, unhealthy food is creating unprecedented levels of heart disease and other diet-related illnesses. One in four deaths in 2009 was caused by heart disease. At the same time, people continue to go hungry; 14.5% of households were deemed ‘food insecure’ in 2010. Even when a farmers’ market or community-supported agriculture (CSA) program is nearby, many households cannot afford the higher cost of local, organic vegetables or the upfront deposit required by most CSAs. Unfortunately, just demanding lower prices for local, organic food is not a viable solution, because most small farmers can barely survive on their current incomes while trying to compete in an industrialized system not designed in their favor.

Inequitable access to healthy food is a symptom of larger structural injustices such as racism, poverty, lack of community control and representation in local government and organizations, inequity in housing and healthcare, and ecological degradation. These inequities can also play out among groups in the food movement.

Organized communities, together with their allies in national advocacy groups, are taking on all of these elements as part of a movement for food justice. They are working on solutions that, first, support local production; second, make healthy food available to everyone, not just those who can access it by virtue of income or where they live; third, ensure that their communities have democratic control over the food they eat; and fourth, addressing structural injustices like racism.

The grassroots community organization, People’s Grocery, is situated Oakland, a city that has played a starring role in the history of the food justice movement. It was there, in 1969, that the Black Panthers began their free breakfast program, through which they fed children breakfast at over 45 branches around the country. The Panthers’ larger goals were ending racism and oppression and the stated objective for the breakfast program was “survival pending revolution.” Not only were the free breakfast sites filling bellies so that children had a fighting chance of learning something once they got to school, they also served as places to gather community for discussion and education towards deeper social transformation. The Panthers’ food program also helped elevate public demands on the federal government to expand and improve national school nutrition programs.

For the last 10 years, People’s Grocery has been working to bring nourishing food to the neighborhood. At the same time, the group is addressing the underlying causes of what determines the availability of this food in the first place. As Executive Director Nikki Henderson described, “We collaborate with health and economic development organizations, gather residents for food celebrations, and work to raise the consciousness about structural racism and the role it has played and continues to play in creating and maintaining food deserts. We grow food, maintain urban gardens, and pursue effective systems change.”

People’s Grocery’s flagship project, which has since been replicated around the country, was a mini-grocery store on wheels that traversed neighborhoods selling affordable, healthy food. Another project, a modified CSA program called the Grub Box, has been growing strong since 2007. The Grub Box is a pre-ordered, weekly box of vegetables and fruits grown at People’s Grocery’s gardens and at other local farms. The program now works in partnership with Dig Deep Farms and Produce. People’s Grocery also runs nutrition education programs, an urban garden at a low-income housing development, and a buying club where people can order healthy bulk food for wholesale prices. Its Growing Justice Institute is a two-year training program that supports residents interested in designing and implementing food projects and small food service businesses, like catering companies and cooking classes.

Consciousness-raising about the deeper causes of food injustice is woven into People’s Grocery’s work. For example, they ask their Growing Justice Institute fellows to identify the root causes of food injustice that their projects are going to address. People’s Grocery also works to address the ways in which structural racism and classism can play out in the inner workings of the food movement. These manifestations can include inequitable distribution of funding amongst organizations, exclusion in organizing circles or leadership roles, and tension and mistrust between groups. In 2011, People’s Grocery co-created a process to address what they described as the “fear, projection and lack of common perspective…, [which interfere] with the building of trust between ‘privileged’ and ‘under-resourced’ food system reform groups in the Bay Area [of California].” In partnership with another food justice group in their region, Roots of Change, they participated in workshops and trainings. The goals were to traverse race and class lines to develop a joint understanding of oppression and its effects, engage in honest communication, and build up trust and accountability. They’ve also developed “allyship” workshops to help members of the food movement cultivate more authentic and equal relationships across race and culture.

Nikki Henderson said this about food justice: “Our movement has the unique potential to be driven by principles of justice, while maintaining our identity as the community-centered ‘feel good’ network. If we can cultivate this potential, we’ll be unstoppable. That’s our mission in the next 10 years—to embody justice, relationship building, and social action in a way that inspires our country to create the policies and systems that ensure healthy food for all.”

Copyleft Other Worlds. You may reprint this article in whole or in part. Please credit any text or original research you use to Tory Field and Beverly Bell, Other Worlds.