Farmers around the Northeast are still struggling in the wake of massive flooding from Hurricane Irene and the rains of tropical storm Lee in the weeks that followed. Many farms in New York, western Massachusetts, and Vermont were under as many as four feet of floodwater. Crops that survived the flooding will, in most cases, have to be plowed under, because of concerns of contamination from the floodwater. For some farmers, this will mark the end of the season, several months earlier than anticipated, as they simply have nothing left to sell. The devastation from the storms may have long-term implications for the region, as hard-hit farmers determine how to absorb the massive financial and environmental impact and move forward.

Farmers still very much need support from the region’s eaters. To help in New York, support the joint relief  efforts of Just Food and GrowNYC; other relief efforts are happening in Western Massachusetts and Vermont. You can see a map of affected farms here.

Help for farmers here and for wetlands rebuilding. Additionally, if you’ve been affected and need emergency food assistance, you may be eligible for Replacement or Disaster SNAP. Contact your local SNAP location, or call 1-866-3HUNGRY.

Flooding from Hurricane Irene caused massive damage to farms and towns in New Jersey, upstate New York, western Massachusetts, and Vermont. Many people have lost their homes, others are still without power, and towns are facing millions of dollars of damage to roads and other infrastructure. 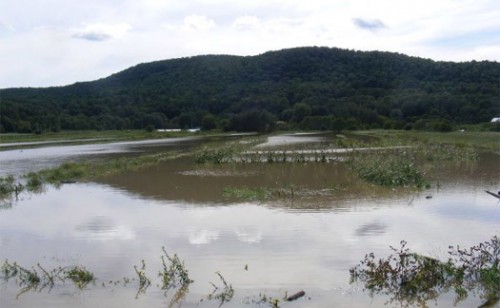 The damage has been catastrophic for farmers around the region — many of whom have lost the entirety of their late summer and fall crops to flooded fields. The situation is now even worse because the FDA recommends that any produce that was under flood waters not be sold for human consumption. WhyHunger has heard from some of our partners about the damage they are facing: Nuestras Raices, whose story is the second below, is a winner of our Harry Chapin Self-Reliance Awards and a current partner in our Community Learning Project. Stoneledge Farm is a community supported agriculture (CSA)-farm providing fresh fruits and vegetables to  several NYC neighborhoods, and works with our partner Just Food. Because of the FDA recommendation, the farm will be out of business for the remainder of the season.

Excerpts of an email to NYC CSA members from Deb Kavakos, Stoneledge Farm August 29: Our farm and the surrounding area has been devastated by the storm.   We received 10-14 inches of rain and have had severe flooding.  The  National Guard has now arrived in the area and clean up has started on the roads and bridges.  Our fields were under 4-10 feet of water.  Everyone is OK. Our house is on high ground and so we had a  place for everyone to gather until the water went down.

September 2: Each day that passes puts a new light on what we need to do as we move forward.  We heard from New York State Dept. of Agriculture and Markets this morning, [who said] it is a FDA recommendation that the producers need to follow.  If a farm goes against the recommendation and sells produce and there is a [food safety] complaint, it will trigger an investigation by Ag & Markets and FDA.  The farm would have the products seized and be issued a fine.  Any resulting lawsuit from the consumer would hold the farm completely liable because the farm did not abide by the recommendation.

[The recommendation] puts each farm in a position of either taking a risk that could result in losing their farm or stopping sales for the season.  We just can not take that chance.  We have the whole farm to lose and would rather give up this half of the season than be under the possibility of an investigation and lawsuit for the remainder of the season.

As much as we would like to keep delivering [vegetables for the rest of the regular season], we need to start to clean up and get the farm back on track for next season. We feel that we need to make a plan and move ahead and get cleaning up. So we are abiding by the FDA and Ag and Markets recommendation and will not distribute any more produce.

I know it may be difficult for some members to have paid and not receive any more produce. If you would like to schedule a time for us to come to your CSA site to discuss what has happened, please let me know and we will work to make that happen. We are sincerely thankful. There are farms in Greene County that have lost all of their crops and do not have the support of a CSA community behind them.  Thank you again for being part of Stoneledge Farm.

Nuestras Raices (“Our Roots” in Spanish), based in Holyoke, MA, facilitates a city-wide network of community gardens, educational programs, and an urban farm center called La Finca which lies immediately alongside the Connecticut River. For the last five years, Nuestras Raices has facilitated the use of the center, which has roughly 10 acres of tilled land, by immigrants to farm their own small plots and sell produce at local farmers markets.

Following the torrential rainfall unleashed by Hurricane Irene in Vermont and New Hampshire on Sunday, August 28, the Connecticut River crested on Tuesday August 30, at 117 feet, according to the local Daily Hampshire Gazette. The low point on Sunday — before Irene hit the region — was 104 feet. A height of 112 feet is considered to be flood stage for the river. The flood was recorded as the worst in 20 years.

The result has been near complete devastation of the farmers’ crops. Early Monday morning, Nuestras Raices staff realized the river was rising quickly and they immediately told the farmers to salvage as much of their crops as possible. Program Manager Jesus Espinosa estimated that farmers were able to salvage about 20-10% of the crops.

By Monday night, the flooding was so high that the farmers could no longer go out to their fields because of safety concerns. By Tuesday morning, the flooding was noticeably worse. The small bridge connecting the main field to the smaller field that is nearby the main entrance to the site was destroyed by the flood.

Espinosa has been in touch with Congressman John Olver about the devastation and has reached out to the Holyoke Mayor. The organization has no insurance to cover the enormous loss the farmers suffered, and they are currently looking for other means of support.

The massive devastation of this farm in Holyoke is just one example of damage caused throughout the Eastern United States by Hurricane Irene. Many other farms located along river beds, including many in Western Massachusetts, were also devastated by flooding following Irene.

As climate justice advocate Bill McKibben has pointed out, the atmosphere is about four percent wetter than it was 40 years ago, due to climate change caused by greenhouse gas emissions. This is because warm air holds more water than cold air. The greater intensity of storms that we’ve seen in recent years, including, but not limited to, Irene, is clearly an effect of climate change. Preparing to deal with increasingly volatile storm systems in a way that seeks justice for those affected must be a major priority of the organic and sustainable agriculture movements.