“The blame is not the rain! It’s crime that is renewed every year!” – Movimento dos Atingidos por Barragens – MAB

Rainy season always puts the communities living near dams at risk of new breaches. While we know the on-going climate crisis is increasing the severity of these risks, its critical that we look at the reasons beyond the water itself that has led to all out crisis in Brazil.

Two dams collapsed in the northeastern Brazilian state of Bahia on Sunday, December 26th, 2021, flooding towns across the already hammered region after weeks of heavy rain that had caused thousands to flee their homes. At least 20 people lost their lives.

On January 14th a dam located in the rural area of Ouro Fino (MG) broke down flooding pastures, forests and damaging roads.

WhyHunger’s allies on the ground in Brazil point to larger issues at the heart of this crisis, like  the lack of proper maintenance, safety mechanisms or policies to hold private industry accountable in an ongoing prioritization of economics over human life. History points to neglect and a lack of accountability creating unimaginable situations where communities most impacted by these crises are left to fend for themselves. Yesterday, marked yesterday marked 3 years since a massive dam break at Brumandinho.

According to Reuters, “Authorities are monitoring an additional 10 dams for any signs they may collapse. Scrutiny of public infrastructure and urban planning comes just a few years after the collapse of a mining dam in neighboring Minas Gerais state killed some 270 people.”

Brazil is one of the world’s leading countries in hydropower – a renewable energy source provided by the construction of dams or diversion structures altering the natural flow of a river or other body of water.

Despite its severe environmental impacts, dams have always been an attractive and economically viable energy source for growing populations because of its seemingly endless supply of power and the minimal need for maintenance after its construction. (source: “History of Dam Development in Brazil”)

Privatization of land and the targeting of the Amazon (one of the world’s most biodiverse regions) for the commodification of resources has been an issue for over a hundred years and only compounds these issues.

These sorts of development projects shift the risks to rural communities – the folks directly impacted by social, economic and environmental risks of dams – which has led to decades-long anti-dam activism in Brazil

WhyHunger spoke with several allies in Brazil to learn what help is needed now:

Brazil’s Landless Workers Movement, Movimento dos Trabalhadores Rurais Sem Terra (MST) launched an international campaign for donations to rebuild the physical structures (houses, schools) of our territories affected by the heavy rains. See their calls for activation below. Donation can also be made at https://www.mstbrazil.org/content/donate-mst

MST’s social media campaign for support includes these graphics. Which translate to: 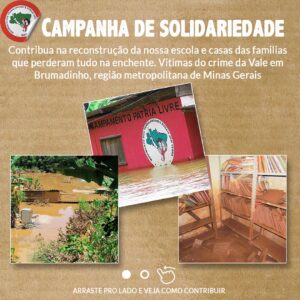 Solidarity Campaign
Donate to the reconstruction of our school and the homes of the families that have lost everything in the flood. Victims of the Vale crime in Brumadinho, metropolitan region of Minas Gerais. 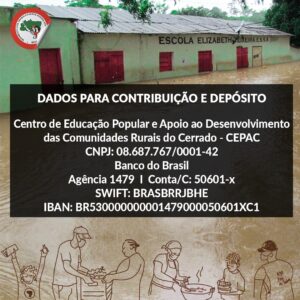 Info for Donations and Deposits – see the above graphic. 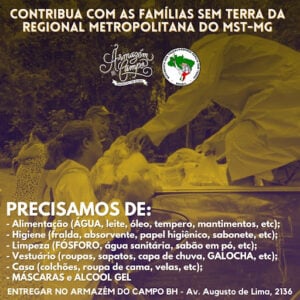 Contribute with the Regional Metropolitan Families without Land of MST-MG 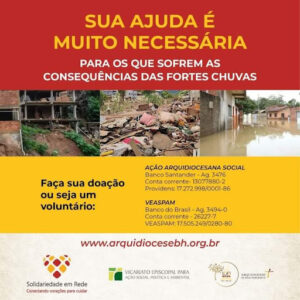 Your aid is very much needed by the those being affected by the damaging heavy rains. Make your donation or volunteer.

The Movement of People Affected by Dams (MAB),is working to support the basic needs of people affected by floods and dam ruptures like food, drinking water and clearing debris; mapping information on the damage caused, share news and information with communities.  and structure a collective claims agenda, with the participation of the affected communities; and helping  communities organize themselves so they can call on their governments and the responsible companies for better support and action. 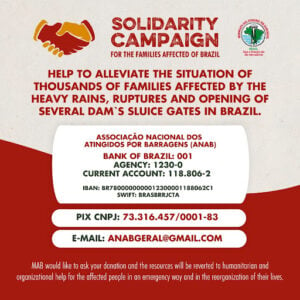 You can learn more about the situation on the ground here and support via the details found on this graphic.