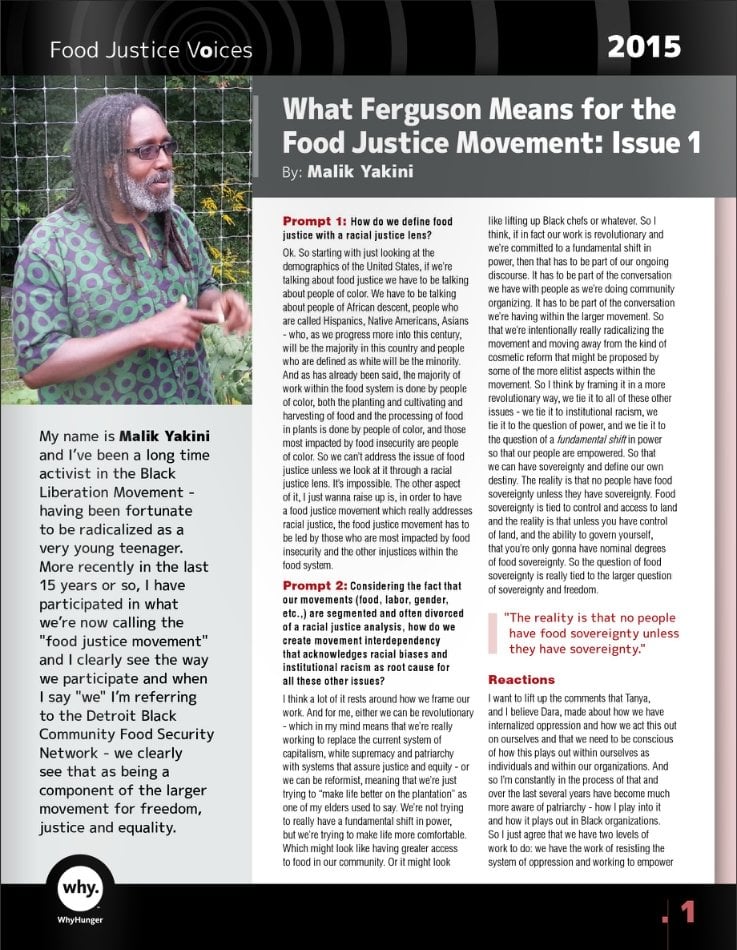 Michael Brown, an unarmed Black teenager, was shot and killed on Aug. 9, 2014 by Darren Wilson, a white police officer, in Ferguson, Mo., a suburb of St. Louis. What does what happened in Ferguson and the subsequent response that followed have to do with the food justice movement?

To lift up critical voices of grassroots leaders, WhyHunger’s Beatriz Beckford facilitated a national call with dynamic organizers and activists across the country to discuss the connection between the oppression that Black communities face at the hands of the state via police violence and at the hands of an unjust food system. Based on this initial dialogue, What Ferguson Means for the Food justice Movement series was born. Through this series, we’ll release a powerful collection of articles featuring the grassroots voices of Black leaders working within movement building and food justice to create real social change. These are their voices and their solutions, rooted in their lived experiences.

The What Ferguson Means for the Food Justi Ace Movement series is a collective interrogation of these issues from the perspective of Black activists around the country organizing around food justice. The series is rooted in the innovation happening in Black communities to resist state violence in all its forms while building our way into the society we have always dreamed of.

We hope you join us for this important conversation and contribute your thoughts. Read the series introduction by Beatriz Beckford to get started and follow the conversation with #FoodJusticeVoices