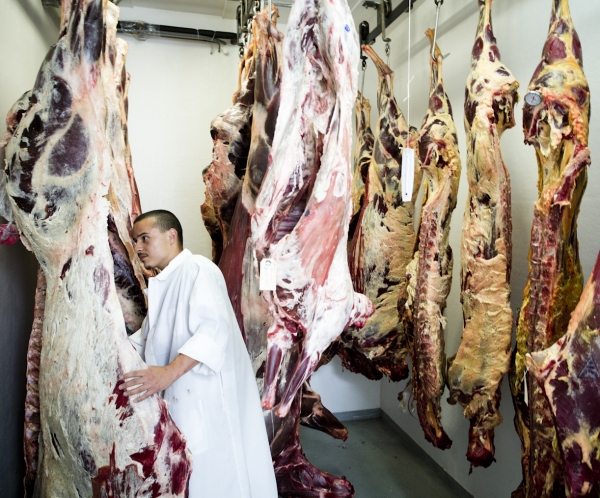 The grim reaper of Taos County is a quiet, soft-spoken man who arrives to ranches in a giant white semi-truck emblazoned with colorful logos. Gilbert Sauzo Jr. drives the truck. He’s the reaper, using a bolt stunner or rifle to slay cattle, elk, bison, or pigs, but none of it is grim. Gilbert and his staff of one or two, slaughter livestock on ranches within 100 miles of Taos. They clean the animal, butcher the meat, and store it for distribution directly to consumers or to specific markets in Northern New Mexico. It’s the most humane, responsible meat harvesting in the state, if not country, and it’s part of a decades-old effort to incubate, support, and empower health food producers and small businesses in Taos County.

But Pati Martinson and Terrie Bad Hand have been building a foundation for local economies for almost three decades. They know the value of patience when it comes to developing grassroots change. The two women share an office inside the TCEDC headquarters. A long plastic folding table holds years of information in manila folders. A photo of Terrie and Pati with Bill Clinton hangs from a wall, a relic from a national award they received in the 90s. The two women, Pati a mix of Lakota-Sioux and French, and Terrie of Italian and eastern Cherokee, make a dynamic duo. Pati grew up in rural South Dakota, while Terrie hails from urban Boston. 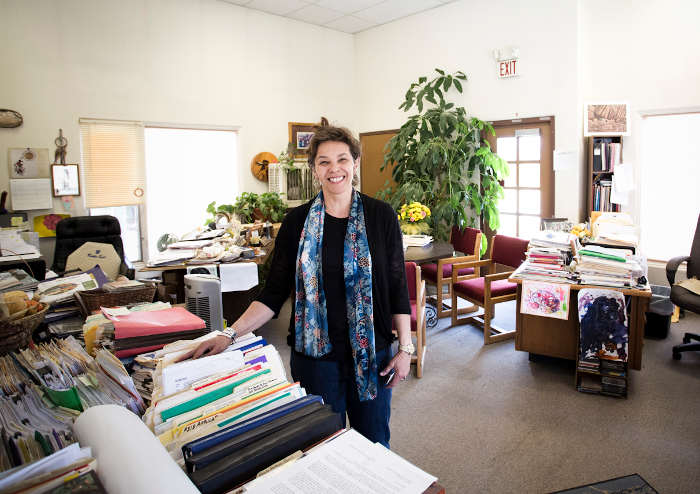 They arrived in Taos to start a community development corporation within Taos Pueblo. Terrie and Pati had launched the Denver Indian Center Development Corporation where they developed a former school into a community center, forty units of senior housing, and a handful of commercial projects. However, when they arrived to Taos Pueblo, the government (priorities) had shifted. At the same time the Molycorp Mine, a molybdenum mine in nearby Questa shut down.So the County hired Terrie and Pati to be part of the business council. They quickly changed that structure to become a 501c3 Community Development Council, something utterly foreign to the area up to that time. The visionaries had an idea of how to improve Taos County through the non-profit sector.

Taos sits at the base of the Sangre de Cristo Mountains, in an arid, high-altitude climate. The landscape is a patchwork of pueblo communities, Forest Service and BLM public lands, and private ranches. A long history of farming and ranching knowledge has not been too corrupted or disrupted by sprawling developments or large industrial agriculture. The know-how to raise cattle, pigs, even bison and elk, on the sage- and juniper-covered lands remains in the population, despite a downtown center that has become a satellite of Santa Fe’s faux-adobe upscale art-gallery scene. Even the drought of recent years doesn’t scare the older generation of farmers and ranchers too much; it’s nothing they haven’t been through in the past.

So Pati and Terri and TCEDC have been trying to tap into that collective knowledge and the still-healthy land to foster a local food system and economy for the isolated community of Taos. Before they bought and began operating Matanza mobile slaughterhouse in 2007, they built a 5000 square-foot food center in the office complex. They streamlined the permitting and education process for cottage industry-style, value-added food producers. To make homemade salsa, hummus, jams, baked goods for sale in the marketplace requires a laundry list of certifications and trainings. And it requires a coded kitchen production space. TCEDC went beyond providing the kitchen. They held efficient, concise workshops that brought regulators together with potential food producers to train and certify them in a single week.

The program was a success, paving the way for small producers to create and sell their goods in Taos markets. Today over forty small businesses, many single proprietors, rent space in the 24/7 kitchen, utilizing the fruit press, the multiple ovens, the vacuum sealer for their products. 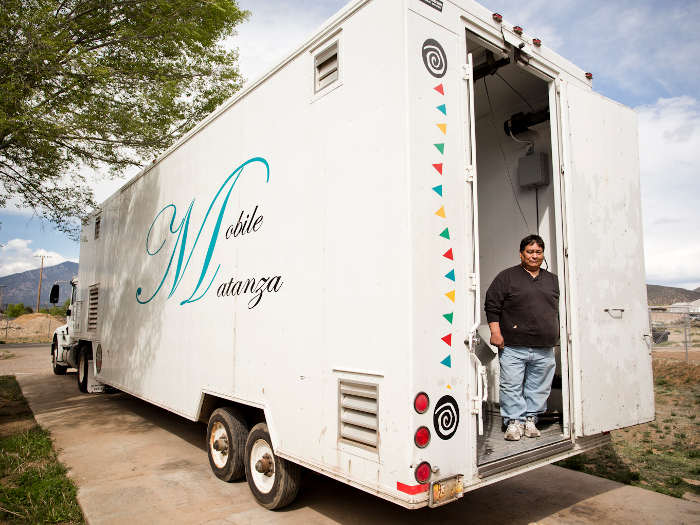 Eventually, the meat producers heard about the community kitchen and they approached TCEDC for help. Many ranchers outside Taos had been raising their beef in humane, sustainable ways for years, but without a processing facility in Taos, they were forced to sell all of their stock at auction or to feed lots. The good meat was getting thrown into the same mix as the bad meat and the ranchers weren’t seeing an economic benefit for healthy ranching practices.

So the TCEDC contacted the country’s mobile slaughterhouse guru, Bruce Dunlop, the man from Lopez Island, WA who developed the first mobile unit for the isolated San Juan Island ranchers. Bruce visited Taos, and Pati and Terrie trekked to Lopez to learn the art and business of mobile slaughterhouse. It made a great fit for the outlying ranchers of remote Taos. There was a demand in Taos and Santa Fe-Albuquerque for good, local, grass-fed, humanely treated meat, and there were ranchers who wanted a better way to harvest their stock.

As with everything in the slow-moving, organically evolving grassroots food world, creating a fully saturated healthy meat system in Taos and beyond takes time. For now, most of the meat goes to direct consumers who order cuts of a quarter, half, or whole cow, pig, elk, or bison. It’s a high-end market accessible only to middle to upper-income levels.

But Pati and Terrie and crew intend to address that in the coming year. They want to create a fresh market at the TCEDC office complex. They now have two greenhouses on the property so they can sell produce year-round and market the meat for locals who might not be able to throw down a few hundred dollars on a long-term investment in a quarter of a cow. Traditional methods around food might never have imagined a slaughterhouse on wheels or buying fresh produce from a small office complex on the edge of town, but the marriage of old and new is the engine driving the slow, steady growth of a local food system in Taos.