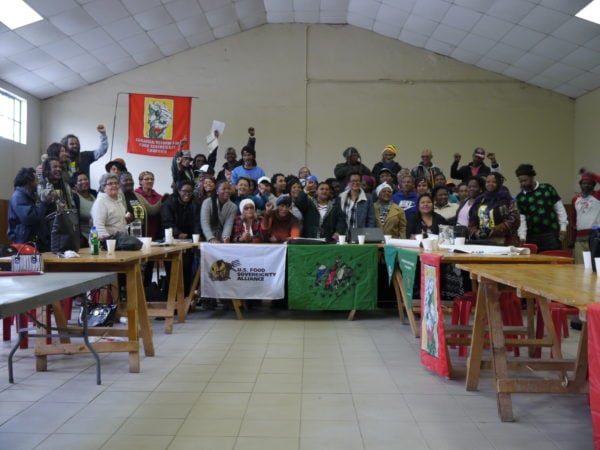 At the Rural Legal Centre’s office in the Nkqubela Township, outside of Robertson, Western Cape, our group of delegates listened in silence to the migrant farmworkers who had joined us for lunch. They told us how they had recently been injured on the job and were unable to work. They shared how the dangerous and exploitative conditions farmworkers like them faced were compounded not only by their precarious status as migrant workers, but by the recent upsurge of xenophobia across South Africa. The farmworker organizers in our delegation nodded their heads as the farmworkers spoke, seeming to demonstrate that they were hearing all too familiar stories. Malizo, who translated for us, is an organizer with the Commercial, Stevedoring, Agricultural and Allied Workers Union (CSAAWU), a union that organizes wine industry workers in Robertson, a center of wine production in South Africa’s Western Cape Province. The stories shared by these workers, who had migrated from Lesotho and Zimbabwe, echoed the struggles of migrant farm workers in the U.S.

That day in Robertson and the surrounding areas, we learned how CSAAWU not only organizes workers, but works with local community members through the Mawubuye Land Rights movement to increase access to municipal land to grow food, herbs, and save seeds. Mawubuye is a local member of the iNyanda National Land movement, organizing nationally for land reform in South Africa. Members of our delegation for the South Africa-US Agroecology exchange, from farmworker and black farming organizations in the US, shared their experiences and struggles and discussed the racial and class dynamics in our respective contexts. The CSAAWU organizers asked for updates regarding the Black Lives Matter movement, and shared the inspiration they drew from the organizing happening in response to police violence. The backs of their shirts read “Farmworkers Lives Matter,” and they shared how they, too, faced violence from the police during their demonstrations. As we sat with the wine factory workers who just got off their shift, we discussed how our organizations could continue to be in solidarity with one another, and ways we might better connect our struggles. Our day in Robertson ended with learning and singing anti-apartheid songs, exchanging gifts of t-shirts and flags, and taking literature and materials to share with our comrades back home.

This learning exchange, which took place in October of 2017, was the continuation of an exchange process that began with a visit by Norah Mlondobozi of The Mopani Farmers Association and Petrus Brink of the Surplus People’s Project to four U.S. states in 2015. Every place we visited in the provinces of Gauteng, Limpopo, and the Western Cape during our 10 day trip was full of amazing experiences, inspiring organizations, and warm hospitality. I share the story of our day in Robertson in particular because it included so many elements that to me illustrate the power and importance of international exchanges between social movement organizations. These learning exchanges create opportunities for organizations to understand the similarities in the conditions, struggles, and challenges faced by oppressed people in different contexts; they allow for the sharing and coordination of strategies and tactics; they create and strengthen international relationships; and they inject our organizations and movements with inspiration.

The physical presence and face-to-face encounters during a learning exchange accomplish what would be very difficult to do otherwise. The sharing of food, song, dance, and humor that happens in the spaces between the more structured conversations about our struggles allows for the kind of relationship building that simply isn’t possible over conference calls. For those of us who live, work, and organize in the US, learning exchanges allow us to understand the ways other communities organize and struggle, and how our struggles are connected. For instance, in our conversations with union organizers in South Africa, we not only learned that the U.S. is one of the largest markets for South African wine, but that some of the corporations operating and investing in South African agribusiness are doing the same in the U.S. These conversations led to a discussion of ways that the delegates and their respective organizations back in the U.S. might practice solidarity moving forward with the labor and community organizing taking place in the Western Cape.

Additionally, as folks coming from the U.S., where the capitalist logics of relating to land—as merely a commodity to buy, sell, or to extract resources and profit from—are so deeply entrenched, it is imperative for us to see and understand how communities in other contexts are disrupting those relations and the dispossession, poverty, and hunger that those relations produce. In South Africa we were able to see how some communities are resisting those relations through maintaining and reviving alternative ways of relating to land and Mother Earth. During our visit to the Mopani Farmers Association we learned how, in accordance with their indigenous culture, decisions about land use are still determined in regards to the needs of the community rather than the forces of the market. In Citrusdal and Cape Town in the Western Cape Province, we visited occupied farms and territories and attended an organizing meeting of urban and peri-urban farmers facing eviction. These experiences can feed our radical imaginations and provide us with examples of tactics and strategies we can draw lessons from for our own struggles for food sovereignty back home.

As delegates representing organizations and alliances working for food sovereignty within the U.S., it is also important that we are able to present a different face and narrative of life and struggle in the U.S. than what folks from other countries might be used to. By sharing ways that communities within the U.S. have also been affected by many of the same policies and systems that oppress people abroad, and sharing how our organizations and many others struggle against the same global system, we can work to disrupt narratives that many hold about the U.S. and folks that live there. Learning exchanges between social movement organizations, grounded in shared political analysis, are a model for replacing narratives of charity with solidarity, guilt with common struggle, saviorhood with comradeship, and, of particular importance for us in the U.S.—replacing “American exceptionalism” with internationalism.

In this blog series, co-produced by WhyHunger and Community Alliance for Global Justice (links below),  you can read some reflections of the delegates who participated in the South Africa-US Agroecology Exchange. We at WhyHunger have the deepest appreciation for the organizations that helped with the logistical support to make this exchange happen and the organizations that hosted the delegates. Very special thanks to the Surplus People’s Project, The African Centre for Biodiversity, The Mopani Farmers Association, The Trust for Community Outreach and Education, The Farmworkers Association of Florida, Community Alliance for Global Justice, and Thousand Currents.