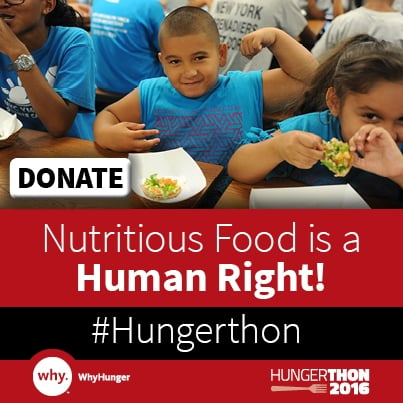 For over 30 years WhyHunger’s Hungerthon tradition has tapped into the power of radio personalities, listeners, celebrities and fans to raise $16 million for the fight to end hunger in America and the right to nutritious food for all. Each November, WhyHunger, its radio partners and celebrity ambassadors team up to raise awareness about hunger and poverty and to engage the public through radio broadcasts, merchandise, social media activation and an extensive celebrity-driven online auction. Funds raised are invested in long-term, community-based solutions to hunger that help communities across America.

“We believe that hunger is a solvable problem and that nutritious food is human right,” said Noreen Springstead, WhyHunger Executive Director. “Hungerthon is an incredible opportunity for people to get involved and make a difference in the fight against hunger. We know that with the help of the community and radio partners, like SiriusXM Satellite Radio, CBS Radio New York, Cumulus New York and iHeartMedia, we can continue our work to help more families access healthy, affordable food and create a future free from hunger.”

2016 Hungerthon Ambassadors Emily Kinney, Kenny Loggins and Switchfoot are using their public platforms to help raise awareness for the campaign, and to educate and engage their fans in action to help end hunger in America.

“WhyHunger was founded on the belief that musicians and the music community have the power to fuel social change and Hungerthon has been part of building the movement for social justice and an end to hunger for three decades,” said Hillary Zuckerberg, WhyHunger Artist Against Hunger & Poverty Director. “We could not be more thrilled to be working with our 2016 Hungerthon Ambassadors to continue this tradition.”

With 42 million Americans struggling with hunger, WhyHunger asks everyone to join the campaign. Here’s how to take action and contribute to WhyHunger’s work:

Starting Nov 8th, visit www.charitybuzz.com/hungerthon to bid on exclusive auction items including autographed memorabilia and celebrity experiences. Included among the many items that will be up for bidding in this year’s Hungerthon are: