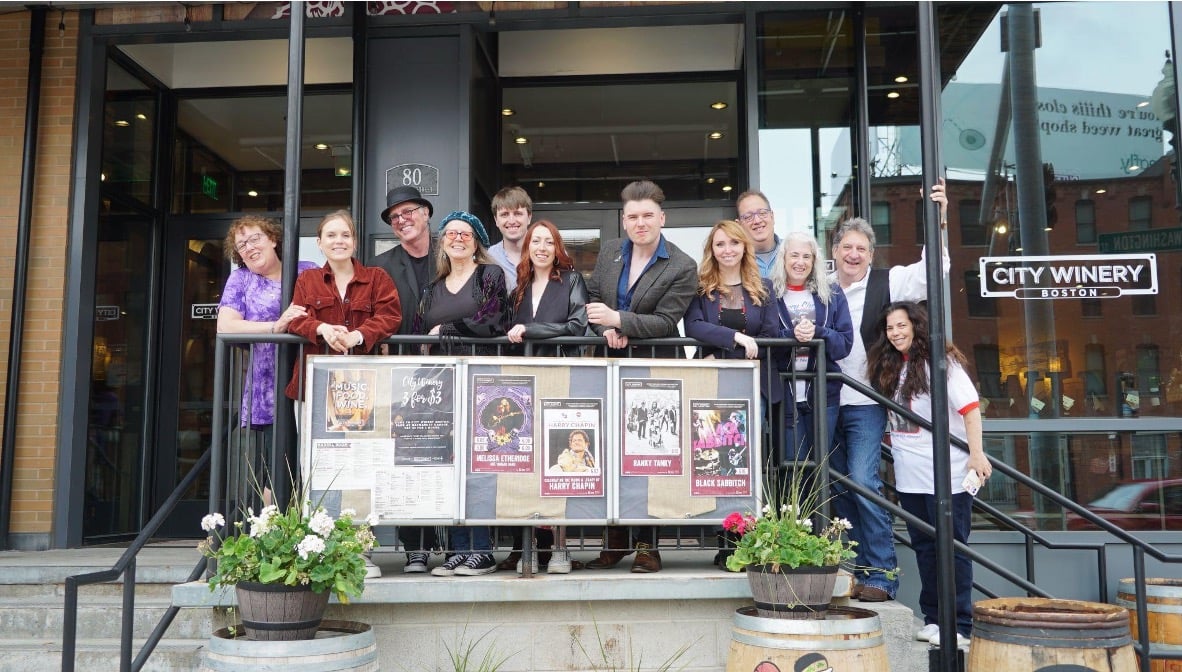 Harry Chapin embodied the artist/activist and was a visionary with a dream to end world hunger and poverty. Harry Chapin has shown the world and artists alike that music has the power to shift social movements, create real change and give voice to social issues that affect our world every day.

In the spirit of Harry and his activism through music, Jeff Pulver brought together a group of talented artists to perform at City Winery in Boston to raise funds for WhyHunger and our work. Artists such as Coaimhe Byrne, Colm Gavin, Doug DeJoe, Emily Sangder, Lainey Dionne, Wes & Victoria Hamil, and Oisin Fitzgerald came together to perform several of Harry’s songs for a night of inspiring music.

We connected with artists Colm Gavin and Emily Sangder to learn more about their activism in music, what inspires them as artists, and more.

Q: Why did you get involved in “Jeff’s Place: Celebrating the Music & Legacy of Harry Chapin” to support WhyHunger?

Emily: I wanted to be involved for many reasons, but the virtual show we put on last summer really got me excited about this organization and I wanted to really be a part of future events. When I found out that we were going to do a live show at City Winery, I was so excited! I love supporting causes like this that really matter, as well as getting to sing great music with my friends.

Colm: I was honored to be asked to be a part of the event in the first place. I’ve long been a fan of Harry’s music, so when the opportunity came to commemorate his work, combined with the chance to help out WhyHunger, it was something I could never pass up.

Q: Harry Chapin co-founded WhyHunger and embodies the musician/activist. In what ways do you think music has the power to inspire social change?

Emily: I think music has the power to create huge amounts of change, because music can stir up such strong emotions for people. If you’re listening to a song and you find yourself not only agreeing with the lyrics, but emotionally feeling the harmonies and melodies as well, then you will want to support the artist and do what you can to support what they stand for.

Colm: If it stirs emotion in the heart of one, it can do so in the hearts of many. In a time where there’s so much division in the world, music is something that I feel naturally unites us.

Q: Why do you think people should care about issues of social justice, such as ending hunger and poverty?

Emily: People should care about other people. This world is so complicated, but that is the bottom line for me. If you find yourself making your way through the world not caring about other people and wanting to help other people, then I’m not sure what you’re doing.

Colm: There’s an old expression that goes “You don’t miss the water till the well is dry”. I’ve got food on my plate today, but tomorrow I may not be so lucky. We must never forget that. Nothing’s guaranteed, in the face of that, we should give readily because we don’t know the day or the hour where we might be the poor soul with their hands outstretched.

Q: As an artist, what inspires you?

Emily: I’m inspired by people creating change and saying things that haven’t been said before. Harry was such a storyteller, and the fact that he used his platform to create such valuable change is really inspiring to me. If I get even a fraction of the fanbase he had, then I want to do the same.

Colm: I find inspiration in all manner of things; the human condition continues to puzzle and amaze me. I’m a sucker for a good narrative, something Harry excelled at. I think he’s someone all songwriters owe a mighty debt of gratitude to.

Q: How can folks learn more about your work or follow you?

Emily: Luckily, I’m the only Emily Sangder musician out there 🙂 so it’s easy to find me! If you google my name, you will see my website as well as my social media links, and my music is on all streaming platforms and Bandcamp as well! You can find Emily at: https://www.emilysangder.com, on Instagram, Facebook, Youtube and Spotify.

Harry was such a storyteller, and the fact that he used his platform to create such valuable change is really inspiring to me.

Thank you to our friends at Jeff’s Place and to all the artists that came out to support WhyHunger through this event. Learn more about WhyHunger’ Artists Against Hunger & Poverty program here.