In an announcement better suited to the pages of The Onion than an internationally-recognized award, the 2013 World Food Prize was given yesterday to an executive at Monsanto. The 27-year-old Prize, awarded for improvements to the global food supply that reduce hunger, honors biotechnology scientists for the first time this year, with three laureates including Robert Fraley, Monsanto’s executive vice president and chief technology officer. 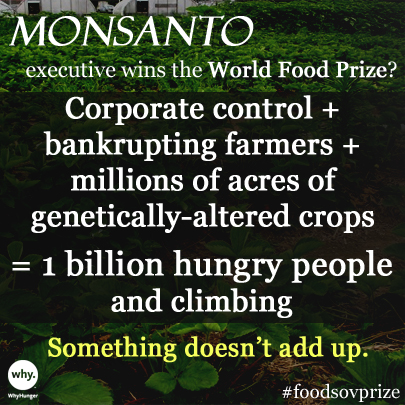 The fact is, Monsanto’s seeds produce very little actual food. Its genetically altered corn is grown primarily for animal feed, ethanol, and food additives such as high-fructose corn syrup. Monsanto has increased the amount of raw agricultural material, but it has done little to decrease hunger or improve the world’s food supply. Even with more than 420 million acres of genetically engineered crops planted to date, the number of those going hungry worldwide has increased–to the unconscionable total of one billion today.

In 2007, an international study of agriculture and food production by 900 scientists in 110 countries found that “business as usual is not an option” for the future. In order to feed the world, the study found, we must move away from industrial agriculture and biotechnology, and instead invest in small-scale farming, access to markets and localized solutions. Other international studies and reports since then have drawn the same conclusion. This is also the message we hear from our partners working in communities in the US and around the world: Small farmers want to feed their communities, but are often blocked by regulations created for large corporations, kept out of markets by huge distributors, can’t find seeds because of monopoly ownership, or many other obstacles. 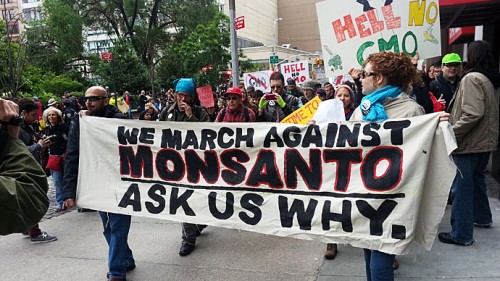 Monsanto’s agricultural model is instead based on corporate control, making farmers dependent on its technology and virtually unable to grow any actual food. Once a farmer buys Monsanto’s genetically modified seed, he or she must also buy the necessary herbicides and other inputs to go with it—and is forbidden from saving any of the seed to plant the following year. The company’s policy is one of secrecy and intimidation, sending inspectors to farmers’ fields in search of stray plants and suing the farmer if they find plants possibly in violation of their licensing agreement (corn seeds itself naturally, and so it is virtually impossible to keep track of every kernel). Unable to match Monsanto’s legal spending, hundreds of farmers have settled such suits (it’s hard to tell how many, because the settlement generally includes a non-disclosure agreement) rather than be bankrupted by the battle. Additionally, an increasing body of research is demonstrating that constant planting of Roundup-Ready corn is leading to significant growth of “superweeds”—weeds resistant to Monsanto’s Roundup herbicide, one of the most common agricultural herbicides.

Monsanto is out of touch with the real solutions for how to feed the world—solutions that many small farmers and communities around the world already know and would be implementing even more effectively if only the corporate giants would get out of the way. Monsanto is out of touch, but so, clearly, is the World Food Prize. To honor those truly decreasing hunger and making innovations in the food supply, look instead to the Food Sovereignty Prize, which champions solutions coming from those most impacted by the injustices of the global food system: small-scale family farmers, fishers, workers, urban growers, and many others around the world. The announcement of the 2013 Food Sovereignty Prize winners next month will show organizations on the true path to ending hunger through the production of food that nourishes people, the environment and the local economy—not showcase a company who should have been merely the punch-line to a twisted joke.