PLUS: 90% say ending hunger in the U.S. is a solvable problem.

WhyHunger — a leader in the movement to end hunger and advance the human right to nutritious food in the U.S. and around the world — today released results from its ‘2022 Hunger and Food Insecurity Survey,’ which examined Americans’ perceptions on hunger. 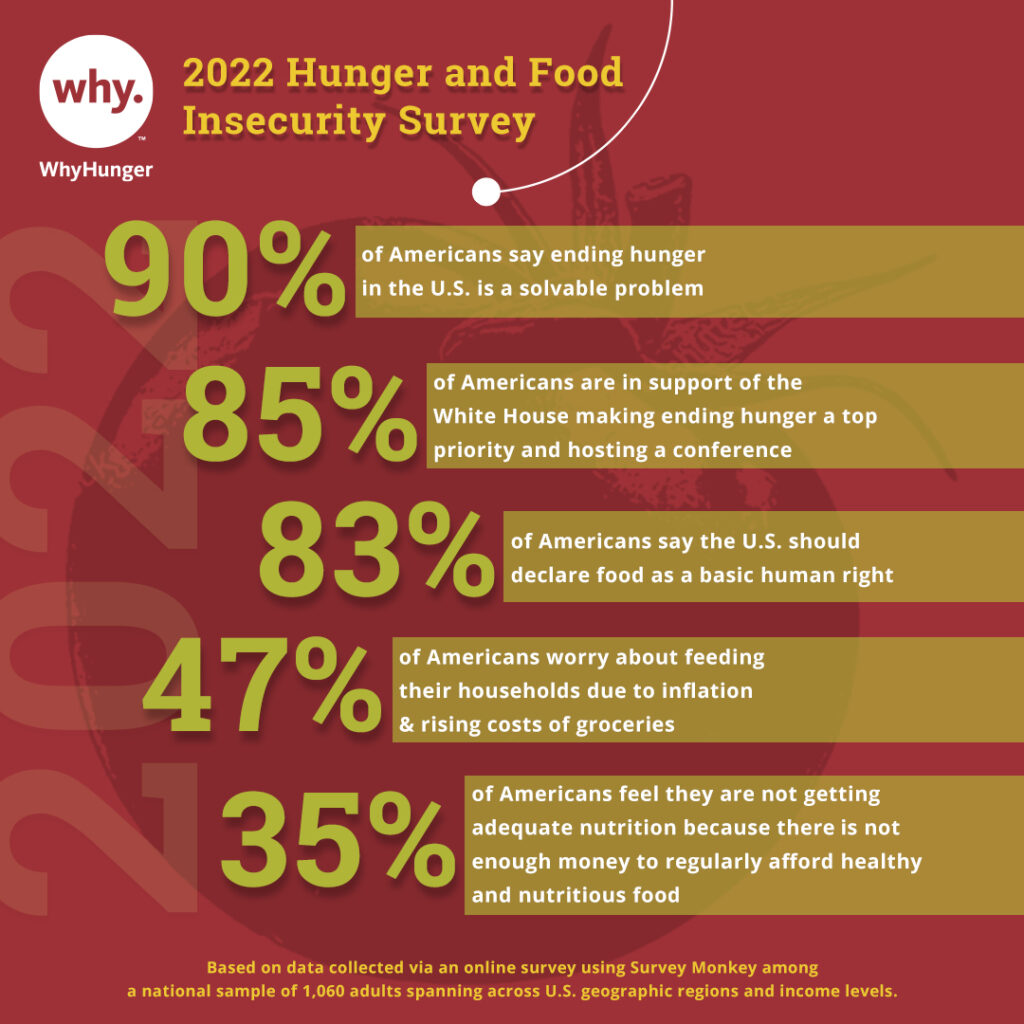 The survey found that inflation and rising costs of groceries are a persistent concern among Americans, with 47% report worrying about being able to feed themselves and their families. In addition, over one third (35%) feel they are not getting adequate nutrition because there is not enough money to regularly afford healthy and nutritious food.

The survey comes on the heels of the announcement of funding for a White House Conference on Food, Nutrition, Hunger & Health, which would explore challenges within the current food system and take a holistic (or “whole of”) governmental approach to ending hunger and combatting nutrition insecurity in America by 2030. This comes over 50 years after the first, and only, White House Conference on Food, Nutrition & Health, which resulted in more than 1,800 policy recommendations to reduce hunger and promote nutrition and health. According to the survey, nearly 85% of Americans are in support of the White House making ending hunger a top priority and convening a conference.

“We live in the wealthiest nation in the world with access to so much, yet we continue to face alarming hunger rates. For far too long the U.S. emergency food system has been unreasonably tasked to meet rising demands when we know for certain it will take a lot more than handing out food to make a lasting impact on food insecurity levels. At its core, the problem has never been lack of food, but a lack of access and a lack of social justice. Until we uphold the protections of food as a basic human right for all, this long persistent hunger narrative will continue to prevail,” said Noreen Springstead, executive director at WhyHunger.

Among the survey’s additional findings:

“Hunger is indeed a solvable problem. We need transformative solutions that strike at the root causes of hunger – solutions rooted in social, economic and racial justice – so that all Americans can live a dignified life. As we look at forming a historic White House Conference and making ending hunger a priority, it’s essential that the voices of individuals experiencing hunger and poverty are represented as an integral part of the decision-making process and overarching strategy. We call upon our political leaders to create and uphold legislation and reform aimed at eradicating the hunger epidemic and ensuring access to healthy and nutritious food for all,” added Springstead.

METHODOLOGY
This survey was conducted online using Survey Monkey among a national sample of 1,060 adults spanning across U.S. geographic regions and income levels. The survey sample was weighted to reflect the gender distribution and the age distribution across the 18-44 and 45+ age brackets in U.S. census data.