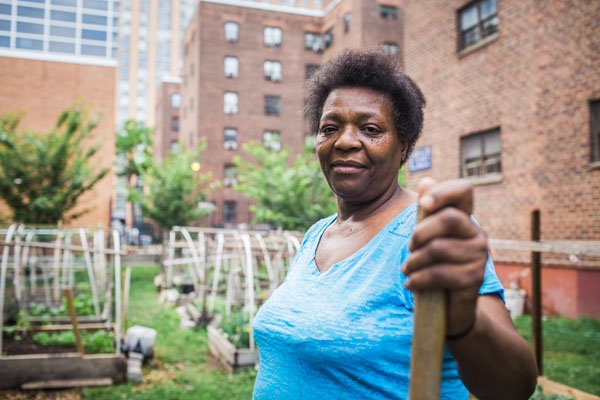 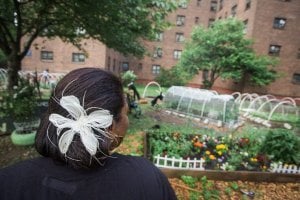 It’s funny how change works on a community level. It can be a slow, almost imperceptible grind over a decade or more. Or change can happen in the blink of an eye. For Fort Greene and Clinton Hill neighborhoods, the shift away from the recession and crime-riddled 1970s and 80s was slow. Like turning a loaded freighter. The Myrtle Avenue Revitalization Project Local Development Corporation (MARP) coalesced in 1999 as the ship had come around significantly in its turn toward improvement. But a lot of work remained.

In 2006 an Associated Supermarket closed, leaving residents of a northwest corner of the community stranded from convenient food access. Eventually, MARP recognized a need and established a Farm Stand to sell fresh produce in that area in 2010. It operated there for two years until another supermarket filled the gap, sending the Farm Stand up a few blocks. Change came quickly as the farm stand adapted to the needs of the neighborhood. Its hours increased from four to seven per day, moving into the morning hours. Customers increased along with food stamp sales.

But by 2012 the change in Fort Greene and Clinton Hill was moving at light speed. It came, mostly, from Manhattan… and Chicago, LA, Atlanta, DC, Maryland, Raleigh-Durham. Brooklyn had tipped the social and real-estate scales, and the gentrification flood gates were opening. Two new groceries went up on the former Associated Supermarket site. Three farmer’s markets popped up within three blocks of MARP’s Farm Stand. And the prices increased to match the incomes and tastes of Brooklyn’s new immigrants. 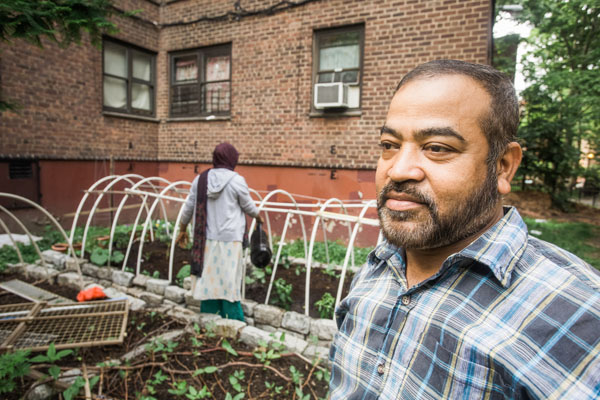 MARP recognized the shift, but also knew that its core constituents weren’t leaving anytime soon. Many men and women like Edna are “aging in place” in the five large housing developments along Myrtle Avenue – Ingersoll, Whitman Houses, Kingsview Houses, University Towers, and Willoughby Walk. According to MARP, an American Community Survey from 2012 estimates around 6,000 residents in zip code 11205 are over the age of 55.

So MARP shifted its efforts away from filling the healthy-food access gap and moved toward sharing knowledge and resources around shopping and eating healthy on a budget. The food was there, but the prices had shot up in many new supermarkets and farmer’s markets. A resulting MARP initiative has been the Shop Healthy on a Budget program, led by the Fort Greene / Clinton Hill Community Food Council (CFC). Council members and community volunteers trained in simple nutrition standards lead monthly shopping “tours” through Fort Greene and Clinton Hill supermarkets, like the Red Apple on Myrtle Avenue.

Shaquana Boykin, a CFC member, leads the Shop Healthy on a Budget tours in the Red Apple store. Shaquana found MARP and the food justice movement through diabetes. She was diagnosed with pre-diabetes as a teenager so she began taking stock in healthy eating and the healthy living options in her New York Community Housing Authority (NYCHA) neighborhood. At a NYCHA garden work day she met Kassy Nystrom, MARP’s Healthy Community Initiatives director. Shaquana learned of the CFC and immediately wanted to get involved. Along with other council members she helped to spearhead the formation of a committee of her peers to begin offering monthly shopping tours that address local issues.

It’s not so much a tour as a conversation. Shaquana or other volunteers walk through the store with willing shoppers and talk about the food, read the labels, learn about why a person buys a certain item. It’s not always price. Shaquana learned that ramen noodles were popular because homeless shelter residents could microwave them. So she talked to the store owner and requested more healthy items that customers could buy for cheap and prepare in a microwave. Shaquana and the CFC have become budget-health ambassadors in the neighborhood. 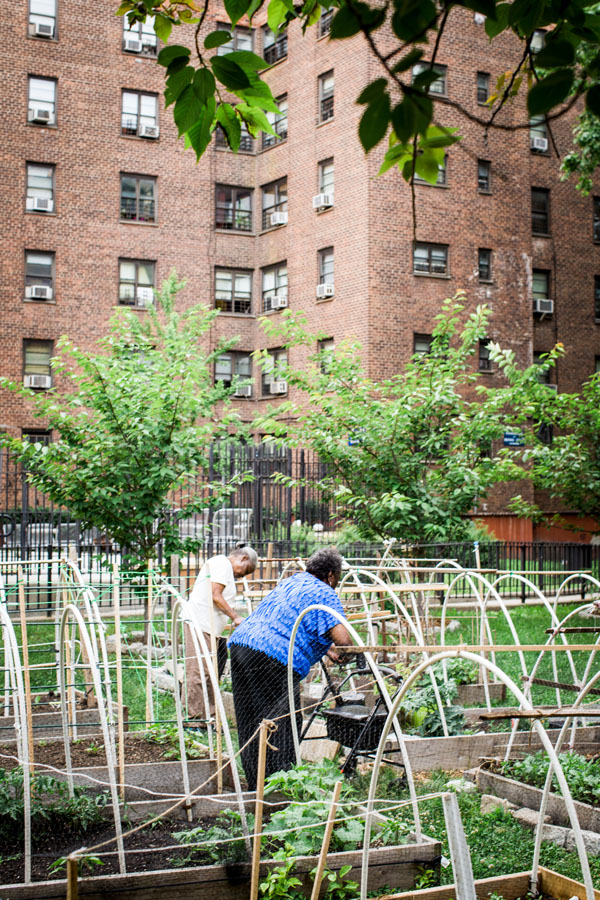 The same sort of organic committee decision-making that Shaquana and Kassy encouraged led to the gardens at Ingersoll and Whitman Houses. Through a MARP community planning workshop at Ingersoll and Whitman, the residents expressed an overwhelming interest in gardens. With approval from NYCHA, the Ingersoll Garden of Eden broke ground in 2009 and the Whitman in 2012.

From March to October, when the weather cooperates, Ms. Grant and her friends spend most days at the garden. It’s not just elderly. Grandkids and young families take part, and recent immigrants from Asia are taking advantage of the chance to grow their own produce and flowers in the communal backyard.

But the change continues to move in at warp speed. Cranes angle into the skyline and the biggest threat to expanding the gardens is shade. Every few months, bright, glassy condos sprout twenty floors up.

“I like it now,” says Ms. Grant. “It’s getting better. But things are pricey, too. And we need a hair salon and a fish market and a dime store near here. For the garden, we’ve got a waiting list so we need to expand. We always want to build more garden beds, but we need sunny spots and we’re losing those fast.”

For now, there’s still one welcome shady spot under the old tree that’s been rooted in the Ingersoll dirt longer than Edna. That’s where the gardeners gather during a rain or a hot summer day. That’s where they bring food and share and laugh and smell their flowers.